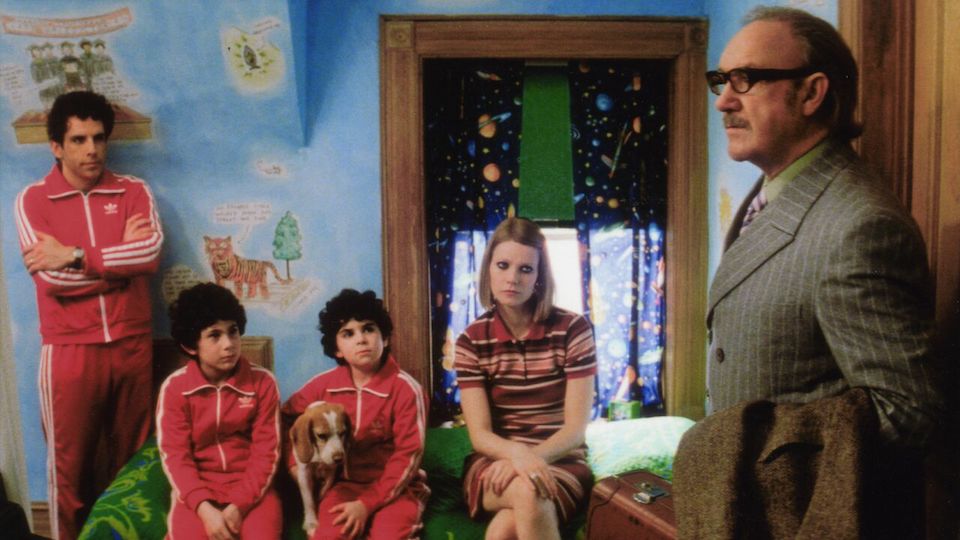 When Rushmore was released in 1998, it established it’s young writer/director as a new and exciting voice in American independent cinema – whilst also providing the springboard for the second phase of Bill Murray’s career as a tragi-comic cult figure. But it is with his follow up film, the sprawling yet meticulously crafted The Royal Tenenbaums that what we now know as the distinctive “Wes Anderson” style came to the fore.

Structured like a great American novel, it tells the story of a great American family, brought low over time by ill-fortune and circumstance. There’s Richie (Luke Wilson) a former tennis champion who’s secretly in love with his adopted sister. His extreme meltdown during a match led to him running away to live on an ocean liner. His brother Chas (Ben Stiller) an investment prodigy, struggling to cope following the death of his wife. Their adopted sister Margot (Gwyneth Paltrow) a hugely successful playwright in her youth, but hasn’t published anything in years. She is depressed, has affairs, and smokes a lot, but keeps this a secret from her family. Their mother Etheline (Angelica Huston) is a highly regarded archeologist, currently being courted by her accountant Henry Sherman (Danny Glover). And at the head of the family, is the estranged patriarch who they all despise. Royal Tenebaum himself, played with remarkable gusto by Gene Hackman.

Royal is dying, and spends the film going to extraordinary lengths to reunite his highly dysfunctional family. The time he steals with his two grandchildren, who he has never met is a real highlight. “I’m sorry about your mother, she was a terribly attractive woman” is one of his classic lines. The montage of them running around New York causing mayhem together, to the tune of Paul Simon’s Me and Julio Down by the Schoolyard is a fantastic and hilarious sequence.

Hackman is on outstanding form. In a career filled with iconic turns, this is one of my favourites. An irascible old goat, Royal is a bigoted and scheming son of a bitch. His scenes with Danny Glover are among the best in the film. His subversively racist greeting when shaking hands with Henry for the first time, “hey lay it on me, man” to the overtly racist “jive talking” shouting match. In real life you would cross the road to avoid such an offensive creature. On screen, being performed by Gene Hackman, Royal Tenebaum is a work of absurd genius.

It is one of those things that is said about any film the looks good and has beautiful composition, but seriously, every frame of this film is a work of art. The production design, the art direction, the colours, the costumes, the exquisite symmetry. It is a glorious film to look at – the rich autumnal tones, evoking the faded fortunes of this once great family. Not a single thing is out of place. This arch whimsy and beautiful mannered artifice would become Anderson’s signature style.

It’s not for everyone, but then the best things never are.

Jumanji: The Next Level review