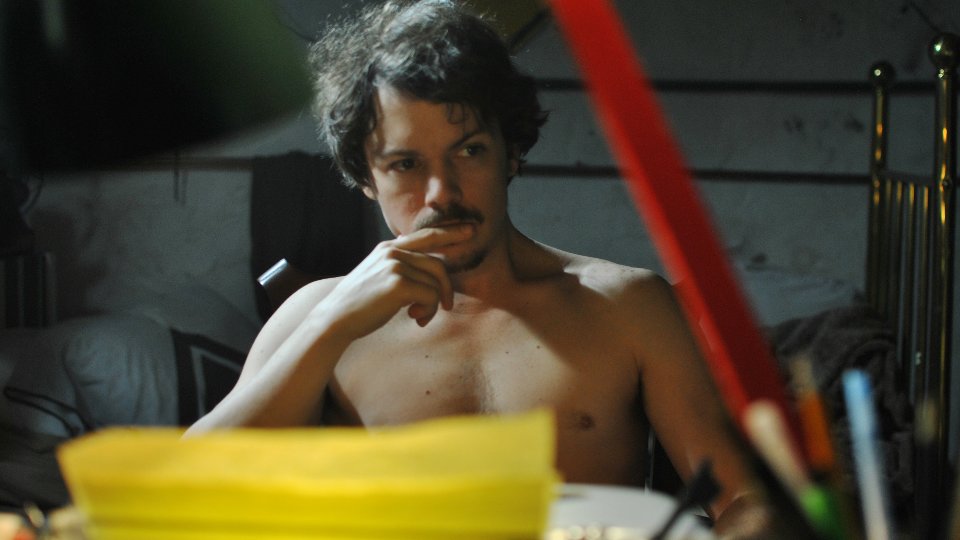 Four different men cross paths during one night in Philadelphia. Brian (Brian Sheppard) is a frustrated writer who can’t sustain a relationship, Jim (Zack Ryan) struggles to fully commit to his relationship with a 40-year old sculptor Drew (Colman Domingo) who is addicted to his work, and Bob (John Lescault) is a successful talent agent is an alcoholic who enjoys being a sugar daddy while away on business. The lives of the four men collide revealing surprising admissions and making each of them look deeper into themselves for answers to their problems and frustrations.

Beautiful Something is the latest film from writer/director Joseph Graham and it’s an engaging and thought-provoking exploration of modern gay life. Each of the four main characters is introduced separately but as the film progresses their lives become intertwined. The movie starts off with Brian who picks up a stranger in a bar but is left disappointed when his hope for intimacy beyond a hook-up is rebuffed. That leads him to take to the streets once again looking for his next connection.

The character that runs through the middle of the narrative is Jim. He touches upon the stories of all of the men and over the course of the night he embarks on a journey of self-discovery. Jim is tired of feeling like a sex toy for his older lover Drew but once he starts to pull away from his relationship, he begins to wonder whether he’s already found what he’s looking for. Chance encounters with both Brian and Bob help him to take a look back over his life and his decisions with surprising outcomes.

For me, the most intriguing character in Beautiful Something is Bob. He is first seen trawling the streets to pick up a young man for the evening. It’s clear he has a certain type of man in mind and what drives him to look for fleeting pleasure is actually pretty heartbreaking. Lescault manages to play the character without him being creepy, something that could easily have been the case given the nature of the character’s behaviour when you’re first introduced to him.

The performances across the board are superb. Colman Domingo is perhaps the best-known actor in here thanks to his role in The Walking Dead but that doesn’t mean he’s the stand out. Brian Sheppard and Zack Ryan both put in fantastic performances and mark themselves out as very talented actors with a lot of potential. Sheppard gets under the skin of Brian and brings all of his frustration to the surface while Ryan gets the balance right between using his looks and physique to convey Jim’s confidence and bringing a more emotional and insecure character out through his actions. Some of the best moments come when Brian and Jim are on-screen together.

Beautiful Something is a fantastic movie that features a great story, a strong narrative and plenty of steamy moments. The direction is brilliant and the way that Joseph Graham uses the actor brings out the best in them. There’s really nothing much to critique the film for except perhaps Colman Domingo’s Drew could have had a little more to do. Beautiful Something is a poignant and relatable look into life as a gay man, regardless of your age.