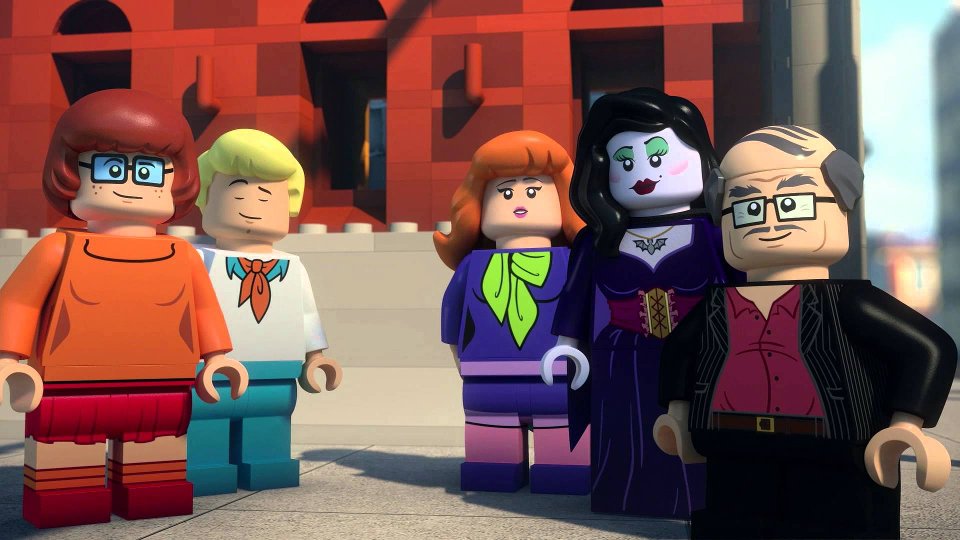 Scooby (Frank Welker) and Shaggy (Matthew Lillard) win first place in a pie-eating competition and their prize is a tour of the esteemed Brickton Studios in Hollywood. Known for producing monster movies, Brickton Studios appears to be thriving but Shaggy and the team discover that the owner Chet Brickton (James Arnold Taylor) is being forced to see it because monsters are sabotaging his features. Accompanied by Fred (Frank Welker), Velma (Kate Micucci) and Daphne (Grey Griffin), Shaggy and Scooby try to get to the bottom of the mystery so the studio can keep its doors open.

Haunted Hollywood is the first outing for Scooby-Doo in conjunction with LEGO. The feature-length movie arrives on the heels of the LEGO Scooby-Doo playsets and it’s the latest in a long-line of LEGO tie-ins. What is does so well is to marry the worlds of LEGO and Scooby-Doo together retaining what makes both of them so unique. Fans of Scooby-Doo can expect to lose themselves in another mystery packed with plenty of twists, turns and comedy while LEGO fans can enjoy seeing the characters and the world around them constructed out of LEGO bricks.

Anyone who has seen a Scooby-Doo film or episode before will know exactly what to expect. Shaggy and the gang are introduced to a series of characters who may or may not be behind the spooky goings-on at the studio. Along the way they get caught up in comedic chases with monsters, get distracted by food and the glamour of Hollywood, and eventually thanks to Velma they get round to finding out what’s really going on. It’s a well-used formula but it serves Scooby-Doo well and allows this LEGO experiment to feel familiar while offering something completely new.

Visually it’s hard to see what the LEGO aspect of the movie really adds to the proceedings. It’s a bit gimmicky and after the first 10 minutes or so you don’t really notice it. Thanks to the success of The LEGO Movie and the various gaming franchises from LEGO, it seems that Scooby-Doo is just the next choice in terms of marrying LEGO with nostalgia.

The release comes packaged with a Scooby-Doo LEGO figure, which is a nice bonus for the kids.

LEGO Scooby-Doo!: Haunted Hollywood is an enjoyable movie that is mostly aimed at kids. Adults will spot the resolution a mile off but it’s a fun watch for all of the family. The story is similar to every other Scooby-Doo story that’s been turned into a film or episode but the LEGO version retains all of the humour and high jinks that you’d expect from the loveable dog and his friends.