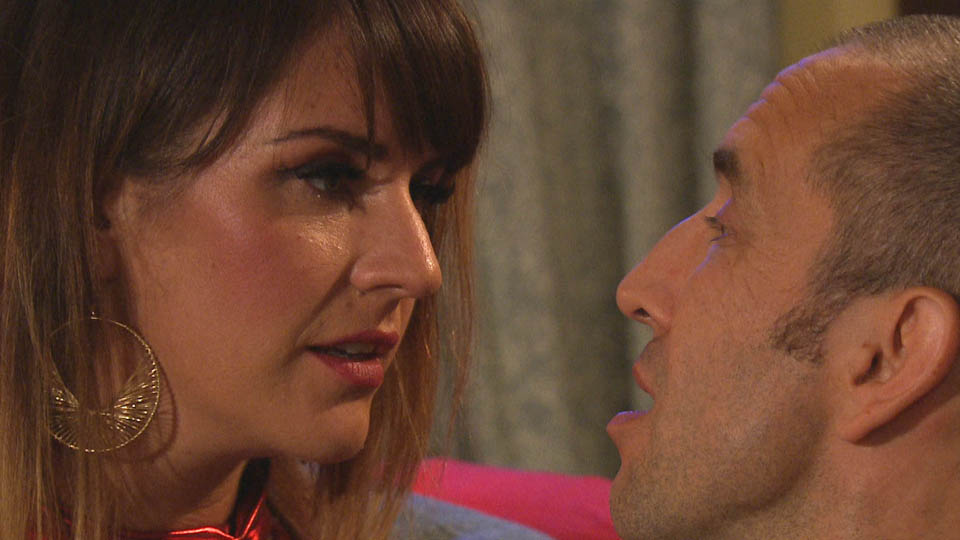 Welcome to our weekly look ahead to what’s going to happen in Emmerdale this week and it looks like a drunken Kerry makes another mistake, Priya and Rakesh split and Lisa is confused.

Dan learns about Kerry and Ross

There’s confusion at Kerry’s party when Dan and Ross swap costumes and Kerry accidentally lets slip to Dan what happened between her and Ross.  Dan is furious and goes after Ross, whilst Kerry drowns her sorrows and makes another mistake by kissing Sam!

Sam is excited and thinks he and Kerry are now a couple, but Kerry has to let him down gently.  Ross calls Dan pathetic and Dan hits him but Ross only retaliates and knocks Dan out cold.  Megan is angry at Kerry over her treatment of Sam and makes a decision which could leave Kerry in the cold, especially when Dan learns about Kerry and Sam.

Zak gets the wrong end of the stick when Bailey seems to be getting a little too close to Megan and thumps him.  He is soon apologising when he learns that Bailey was helping Megan keep Frank at bay.  Lisa has a go at Zak and when Belle walks in she is quickly aware of the tension.

As Bailey goes to drive Belle back, Lisa is stunned when Zak says they need to pull together and goes in for a kiss.  Will she welcome the kiss or push him away?  Later, Lisa nearly confesses to Joanie about the kiss but then can’t bring herself to go through with it.  Lisa tells Zak to stay away from her and ends up having an online dating profile set up by Liv; she’s clearly desperate not to get involved with Zak.

Rakesh struggles to perform his duties in the bedroom, leaving Priya feeling hurt.  He week gets worse when half the workforce phone in sick after being at Kerry’s party.  She then finds Rakesh’s suicide note to her in his jacket and panics that he is going to kill himself.  Rakesh comes clean about his plan to get the life insurance for her.  Priya isn’t coping well and drops a bombshell.

Rakesh begs Priya to save their relationship but she ends it leaving him distraught.  She tells Jai and Rishi the news and it looks like that’s all she’s got to tell them.  A concerned Jai, stops Rakesh from leaving the village and Priya offers to help him and put a roof over his head, but insists they are through as a couple.

Emma spends time with Ashley as the village say goodbye to James.  Will he have any further recall of her being on the bridge?

David lets Frank work in his shop, much to Tracy’s delight.  Frank also persuades Sam to help him win Megan round and it looks like she’s warming to him.

Finn is struggling and goes in to the hospital to talk to someone.
Chrissie is annoyed to hear Rebecca calling herself ‘White’, but her moans are wasted on Lawrence.

Moira is confronted over not appreciating having Cain.  Will she listen?