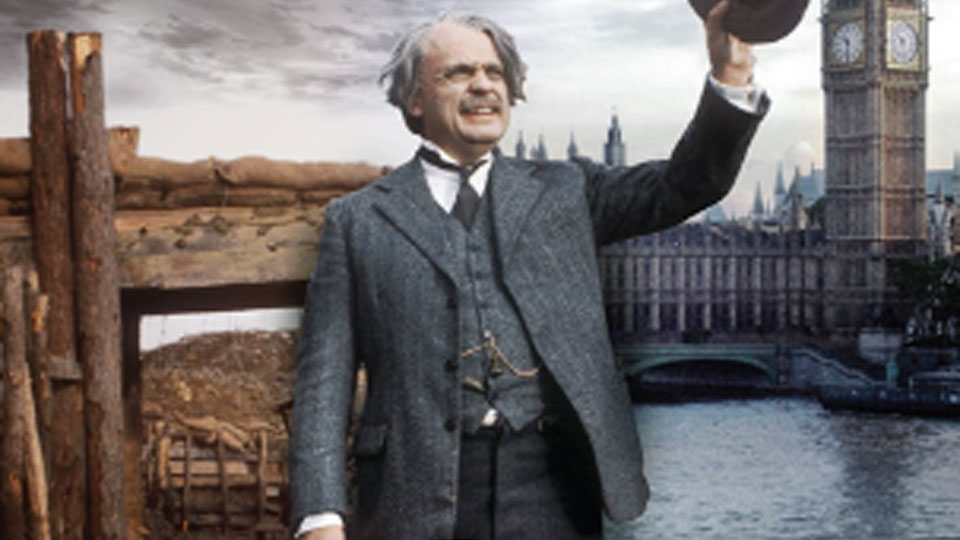 The Life and Times of David Lloyd George is a British TV drama serial from 1981 that follows the life and career of Liberal politician David Lloyd George, Britain’s Prime Minister during much of WWI. His long and eventful life saw him live through most of WWII as well – so his extraordinary story is certainly fine fodder for dramatisation.

The series stars Philip Madoc as David Lloyd George, and is perhaps the late Welsh actor’s best-known work. Madoc is also well-remembered for playing DCI Bain in A Mind to Kill as well as for his numerous appearances in cult television classics such as Doctor Who and Dad’s Army (he was the German U-Boat commander who noted down Pike’s name after Mainwaring’s famous line: “Don’t tell him, Pike.”) Madoc’s towering central performance is what makes this series great. The syrupy, deep, musical Welsh voice and the animalistic quality of his physicality leaves him not unlike Anthony Hopkins, and whilst Madoc may not have reached such stature, it was not through shortage of acting clout.

Like all BBC television dramas of the time, The Life and Times of David Lloyd George is shot mostly in the studio and on tape, but with some filmed location footage added. The sets are decent, with the House of Commons and Number 10 Downing Street especially noteworthy.

By today’s standards, it is long and ponderous. In fact, it would have felt slow even thirty five years ago. That’s because the drama is approached like a patchwork, through snapshots of Lloyd George’s life, incorporating jumps forward in time that can make the scenes feel disconnected from one another. However, the series gets into the psychology of Lloyd George, and if you’re sucked into the world of the story and the characters, you’re happy for it to take its time. It’s written by another Welsh legend, Elaine Morgan, who herself had an interesting life (she’s well worth looking up).

The series may be dry for casual viewers, but for those with an interest in classic TV and historical drama, The Life and Times of David Lloyd George will hit the right notes. Its use of Ennio Morricone’s Chi Mai as the theme tune is inspired, and sets an appropriately reflective mood. Whilst not every detail of the changing political landscape is covered, such as the decline of the Liberal Party (later replaced by Labour as the principal opposition to the Conservatives) that would never have another PM after Lloyd George, it is historically accurate, and commendable for that.

The series doesn’t shy away from treating David Lloyd George honestly, and portraying him as a real human being, warts and all. Principally, this is done through his unfaithfulness to his wife, Margaret (Lisabeth Miles), and his callous disregard for her feelings when he keeps a long-term mistress, Frances (Kika Markham), whom he isn’t faithful to either…

There are a few great actors to look out for in supporting roles. David Troughton (A Very Peculiar Practice) plays Lloyd George’s secretary, and Fulton Mackay (Porridge) takes on a familiarly combative supporting role.

Overall, the series is worth seeing for Philip Madoc’s amazing central performance. Although given an excellent make-up job, wig and costume, it is stunning how much he looks like Lloyd George, and his capability as an actor ensures he embodies the part entirely.