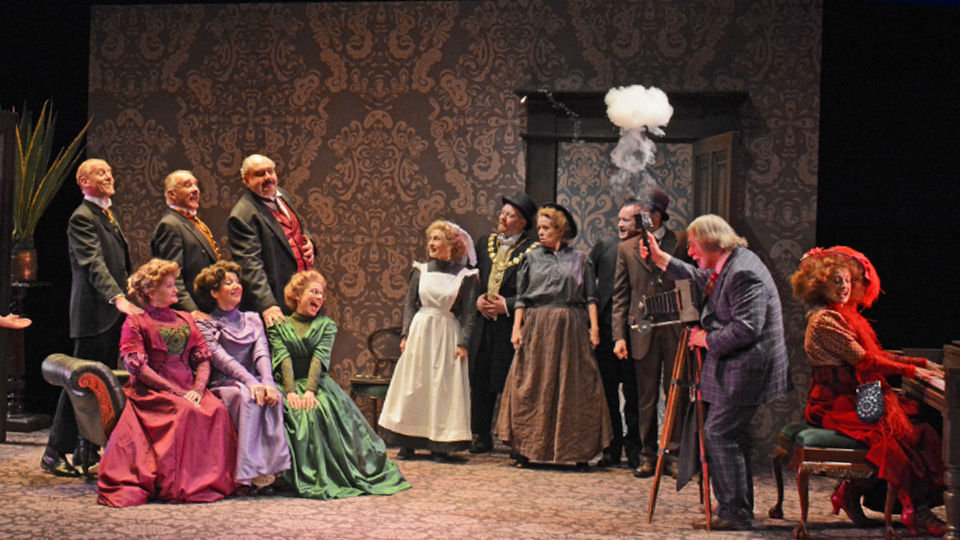 When We Are Married

JB Priestley’s classic runabout comedy When We Are Married is at West Yorkshire Playhouse this month. Produced by Northern Broadsides and directed by Barrie Rutter, this colourful revival of a celebrated farce sings with Yorkshire warmth and bawdy cheekiness.

The story is a simple one. The year is 1908 and three well-to-do couples are celebrating their joint 25th wedding anniversaries. Over-indulgence is the order of the evening until the chapel organ player drops a shattering bombshell. Due to a ecumenical technicality, the couples were never officially certified as married; they have essentially been living in sin for twenty five years.

As the fun of When We Are Married unfolds, one can’t escape the obvious influences it has had upon generations of Northern comedy writers such as Alan Bennett, Victoria Wood and Peter Kay. The play brims with hearty, colourful characters who are pompous, indignant, arrogant and relentlessly suspicious of anything south of Tenbury Wells. The play is farcical, but the true comedy is forged through a recognisably modern method of rich characterisation, which endlessly chips away with a politically satirical blade.

At its core, Priestley’s play is an assault on opulence, arrogance and blind ignorance. Bursting full of grotesques which are never exclusive to one class, the play revels in unmasking the idiocy behind the pretence of manners, particularly amongst those privileged with wealth. Seeing the rich and over-fed suddenly unseated is devilish schadenfreude, and Priestley ingeniously strips the characters bare before a house of henpecked servants, all delighting in their discomfort as much as the audience.

Barrie Rutter directs, choreographing the ever-clucking wives with a regimented synchronisation which at times sweeps the stage like a school of fish. Equally, the husbands stagger and strut with all the cocksure complacency of high school jocks. The dialogue sings with a Yorkshire richness which feels wholly authentic, thanks to a perfectly cast ensemble. Kate Anthony is deliciously acerbic as Clara, whilst Sue Devaney’s petite Annie is the aestheticc opposite to her bullish boar of a husband Albert, realised through a bravura performance by Adrian Hood. Steve Huison is delightfully impish as Herbert, whilst Mark Stratton and Geraldine Fitzgerald are perfectly poised as the Helliwells. Indeed, there is even a twinge of pathos between the two as they discover the truth behind their marriage. Supporting roles are also consistently excellent; in a scene-stealing role, Rutter ambles and sways as an outrageously drunken photographer who holds the key to a resolution which nobody expects.

Brimming full of wit, warmth and Northern cheekiness, When We Are Married is a non-stop barrage of belly laughs. Northern Broadsides have successfully revived a jewel of a comedy which is executed with inspiring stagecraft and stunning comedic precision. At times daft, occasionally tense, yet always outright funny, When We Are Married is without doubt a must-see classic comedy with a relentlessly proud Yorkshire accent.