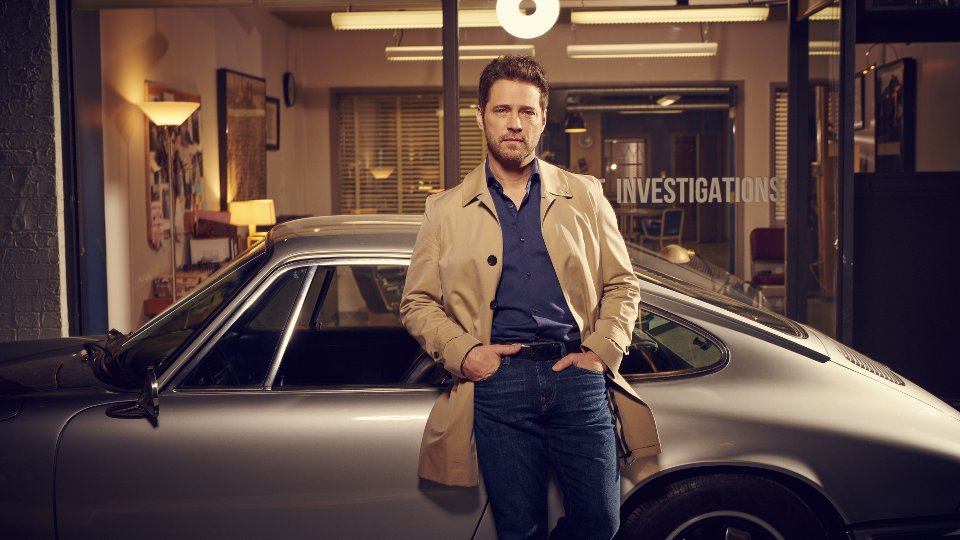 Jason Priestley has long been a fixture of the small screen making his breakthrough as Brandon Walsh on Aaron Spelling’s 90s juggernaut Beverly Hills, 90210.

Since that role he’s worked steadily with roles in shows such as Tru Calling, Call Me Fitz and Stephen King’s Bag of Bones. For his latest role Jason is turning detective in the hit Canadian series Private Eyes.

Ahead of the show’s UK premiere on Universal Channel tonight, I caught up with Jason to find out more about the show, discuss his latest character, and find out if Private Eyes will be returning for a second season.

Hi Jason. How are you today and where does this Q&A find you?

I am in Los Angeles, working on the new Adam Sandler movie. And I’m doing quite well, thank you.

Your new show Private Eyes is coming to the UK this week. What’s the show all about?

Private Eyes is an old school detective show. Me and my co-star, Cindy Sampson, play a couple of private detectives and we solve cases every episode.

What do we need to know about your character Matt Shade? What kind of a guy is he?

Tell us how you got involved with Private Eyes and what attracted you to the show.

I’ve been involved with the show from the very beginning. We bought the rights to a series of books, the Brad Shade Mysteries, in the hopes that we could develop them into a TV series, and, it took some time, but it all came together.

You quickly establish great chemistry with your co-star Cindy Sampson, who plays Angie. What did you do to create that prior to shooting?

We really didn’t have much time. I only met Cindy a few weeks before we started shooting together and I was actually shooting another show at the time. But luckily for us, we do get along very well and we have a lot of fun on the set shooting the show.

In the show you get to show a lot of different sides to your acting talent including drama and comedy. What’s it like for you as an actor to get a character with such a big personality to play?

It’s a lot of fun. You guys didn’t get to see the last series I did in the UK. It was a show called Call Me Fitz where I played a very morally questionable character. Playing a character like Matt, who is trying to improve himself and struggling to be better has been a good challenge.

The full first season has already aired in some parts of the world. Is there a second season on the horizon?

We start filming the second season of the show next month.

I recently read your autobiography and you talk openly about the roles you’ve had in your career. How does the character of Matt Shade compare to the other characters you’ve played?

Shadow has been really satisfying so far. He is a very relatable character because he struggles. I’m sure he will continue to struggle in season two.

What other projects do you have in the pipeline this year?

Season two will take me deep into 2017. Then I believe I’ll get back to directing. I think I’ll shoot another feature next year.

Why should people in the UK tune in to Private Eyes?

Private Eyes is a lot of fun!