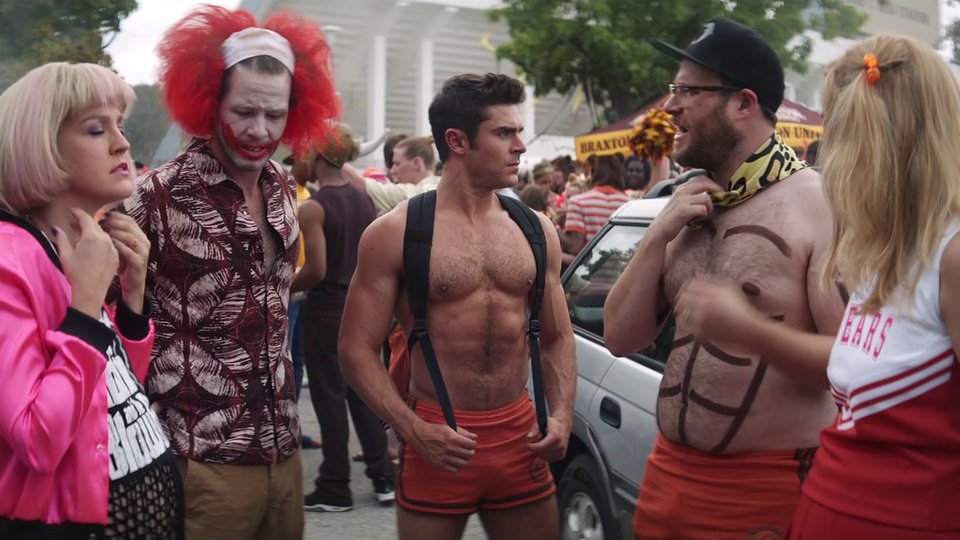 I could take or leave Bad Neighbours, the 2014 original that delivered a funny but very forgetful comedy that didn’t leave any lasting impression. There were laughs to be had but the story rapidly lost momentum as the film went on. However it did pull in massive box-office money so a sequel was always likely to come. Bad Neighbours 2 is that rarest of beasts – a film that’s actually much better than the first and one that takes the time to craft a story that makes sense. Basically, everything you feared for a sequel to Bad Neighbours is quashed by a sharp script, hilarious set-pieces and some great ensemble performances.

We join Mac and Kelly Radner (Seth Rogen and Rose Byrne) preparing for the imminent arrival of their second baby. With a new house already bought, the two have almost secured the sale of their old house. But their worst fears have come true when a brand new Sorority of teenage girls move in next door and threaten the sale of their home. With 30 days left before completing the sale, Mac and Kelly have to once again play hard-ball – not easy when the sorority have old fraternity nemesis Teddy (Zac Efron) pulling the strings.

The set-up is obvious and that should have meant a pedestrian retreading of gags and situations from the first film. But Bad Neighbours 2 manages to avoid all of those trappings by making the hysterically funny script have genuine heart at its core. We learn all about how Teddy has struggled to fit into adult life, especially when his old Frat buddies are doing so well (including hilarious cameos from a returning Dave Franco and Christopher Mintz-Plasse). He strives to find his place in the world and sees a lifeline when new girl Shelby (Chloë Grace Moretz) decides to form her own sorority.

This is the second success of the film – it makes Shelby’s plight actually believable. Yes, they are all annoying as hell and you want them to get their comeuppance, but the motive behind their chaos actually makes sense. Trying to be independent and champion the right of young women who don’t want to be sheep in the old college structure, Shelby and her new friends look to make a stand by doing things their way. Sadly, this clashes with Mac and Kelly.

Seth Rogen and the brilliant Rose Byrne have such a wonderful chemistry here and they are the main reason why the film works so well. Speaking of dynamics, Rogen and Zac Efron also pick up right where they left off, with the two bouncing off one-another to create some hilarious comedy moments. Mac and Kelly’s best friends Jimmy and Paula (Ike Barinholtz and Carla Gallo) return to help them out and there’s a wealth of great cameos in the form of Frasier star Kelsey Grammer, Lisa Kudrow, Selena Gomez, Abbi Jacobson, Hannibal Buress and Billy Eichner.

With a decent story that makes you care about the characters, Bad Neighbours 2 defies the odds and comes in as one of the best comedy surprises of the year. With lots of brilliant gags, un-PC comedy and plenty of belly-laughs, this guarantees a great night out at the pictures. And if the writers continue to be a bit more fearless, I’d even welcome a third movie in this franchise.