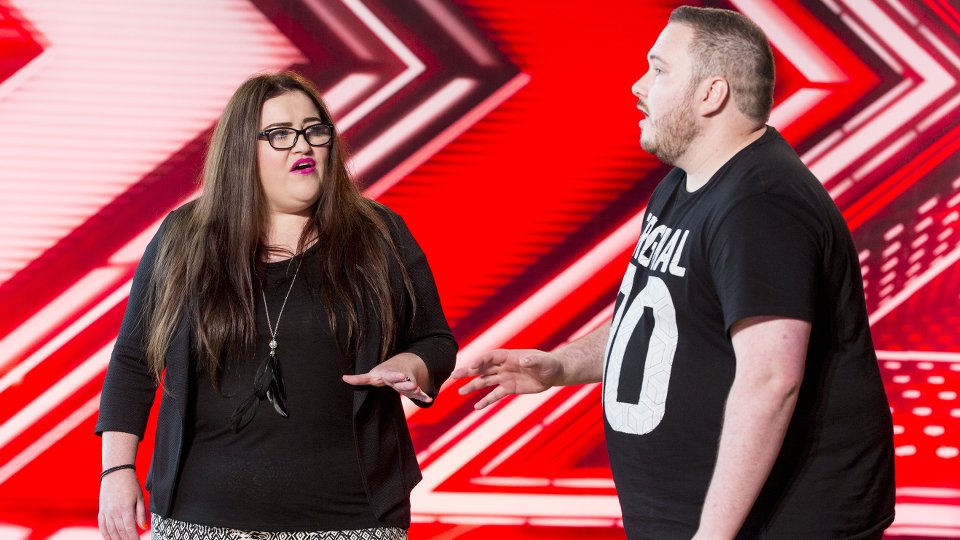 Tonight’s auditions headed to Manchester and we bet that the judges were hoping the talent was better than Dublin (to be fair that wouldn’t be all that hard would it?).

The first person to audition was Ryan Wilkins who told the judges he’d been dreaming of arena tours for the past 10 years. For his audition Ryan chose to sing (well scream) Rihanna and Calvin Harris’ We Found Love. Nicole bopped in her chair while the other judges struggled to keep a straight face. Louis told Ryan that he gave it 100% and Sharon told Ryan he lost his way in the middle. Nicole said it was ‘schamazing’. The judges all sent Ryan through (seriously did they hear what we did?).

Next into the audition room was Lady of Favour aka Muchaneta who chose to sing (well, that’s fairly generous) Ace of Base’s All That She Wants. She didn’t manage to find a key for the majority of the audition and the judges looked horrified. Simon said he felt like he was being told off and Sharon couldn’t hold back the laughs. All of the judges said no. We think they made the right decision.

With the auditions going pretty poorly, it was up to Tom and Laura to try and impress the judges as a duo. For their audition they chose to sing Kings of Leon’s Sex On Fire. We had a bad feeling before they started but actually they weren’t terrible. It was a different rendition of the popular song and both of the singers put an interesting twist on it. The judges were visibly surprised by what they could hear. Sharon gave Tom and Laura a standing ovation and told them she got goosebumps when they were singing calling their audition a ‘pleasant surprise’. Nicole commented on their chemistry and Louis told them he thought they were special. Simon said Laura was ‘good’ and Tom was ‘fantastic’ and suggested that Tom should go through as a solo artist. Tom refused and the duo were voted through with four ‘yeses’.

The auditions moved to London and first to audition was Freddy Parker who performed Amy Winehouse’s Love is a Losing Game while playing keyboard. He already won the judges over with his revelation that he worked part-time at a kennels but when he opened his mouth to sing, they were truly putty in his hands. Freddy sailed through to Bootcamp with ease.

Next up was 17-year-old Chanal Benjilali who performed Lauryn Hill’s Ex-Factor. Her performance was very confident and assured for someone so young. Nicole told her she had a good R&B voice and all the judges put her through.

Matt Terry aka Louis Tomlinson’s doppelganger, entered the audition room next and performed Stand By Me. Nicole was taken with him before he even opened his mouth and prior to his performance she told him she hoped he didn’t suck. Matt brought his family along and it was clear his Nan was his biggest fan in the world. We thought he over-egged it slightly but he’s got a good voice. Sharon told Matt that he ticked every box and Louis was impressed too. Simon compared Matt to Olly Murs and Nicole said she was so happy he didn’t suck. The judges all agreed that Matt should go through to Bootcamp.

Tonight’s next auditionee was very confident and dare we say full of herself… Irina Dedyuk strutted into the room and Simon’s eyes almost popped out of his head. After introducing herself Irina, originally from Russia but now living in L.A., launched into Tina Turner’s The Best. Well one thing became clear very quickly – she wasn’t anywhere near as good as she thought she was. Simon gave a simple yes before telling her how great he thought she was. Nicole told Irina that she had great cheekbones while Sharon told her she was like a James Bond baddie. Oddly all the judges sent her through.

From one oddball to the next, living doll Sada Vidoo was the next to audition. The strange woman seemed to actually believe that she is a doll, despite clearly being a human being that perhaps needs to seek professional help. Simon disputed that Sada was a doll and she continued to argue that she was. For her audition Sada sang Pat Benatar’s Love is A Battlefield and it’s quite possibly the oddest thing we’ve ever seen in our lives. The judges looked as confused as we were and Simon told her he would remember her. Nicole said that Sada was cool and Louis said she was different. All of the judges sent her through. What is going on tonight we asked ourselves at this stage!?!

We felt sorry for anyone following Sada but at least this person seemed sane. Marianna Zappi walked into the room with a big smile and revealed to the judges that she’d been in an abusive relationship that had halted her desire to pursue music. For her audition Marianna chose to sing Bob Marley’s Redemption Song. Nicole started getting teary-eyed during Marianna’s emotional audition and to be honest so did we. What a big voice she has! Nicole told Marianna that she loved her to bits and called her awesome. Sharon said it was the best voice she’d heard in the auditions so far. Louis and Simon agreed that Marianna’s performance was fantastic with Simon telling her ‘it all feels right’. All four judges said yes and Marianna went through to Bootcamp.

The X Factor continues next Saturday at 8pm on ITV.