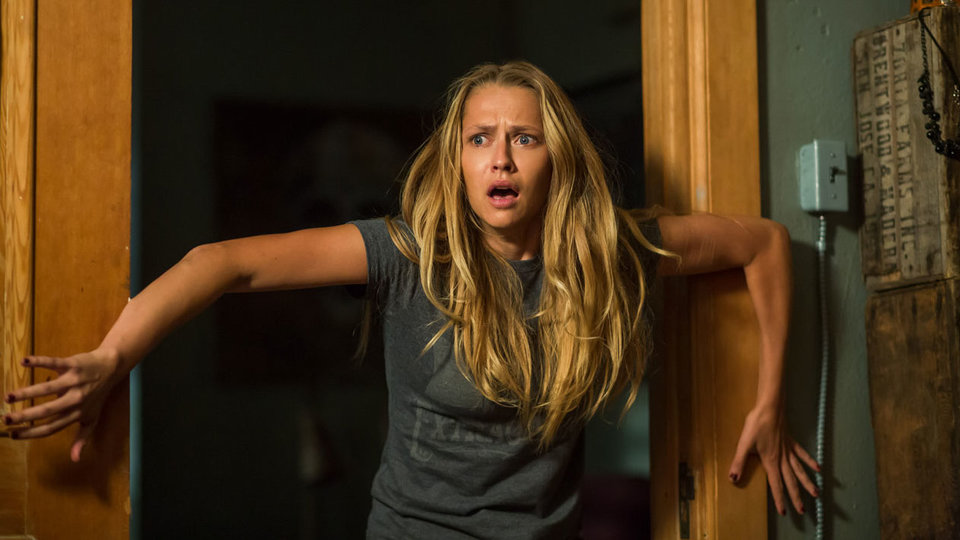 What’s it about? Sitting in the cinema recently, the trailer for this film came on. In the cavernous dark of the screen, it was one of the most terrifying and effective trailers I have ever seen. The concept is truly genius in its simplicity: there is someone in the house with you, but you can only see them when the lights go out. Based on the terrific short film (that you can view on youtube) by Swedish director David Sandberg, he has expanded it into feature length, but has wisely kept it lean and mean and under 90 minutes. The perfect length for a nerve-shredding horror. Tapping into that most elemental of fears, this will have you sleeping with the light on for weeks after you see it.

David Brent: Life on the Road

What’s it about? Ricky Gervais brings his most famous character back for one last hurrah. Twelve years on from (BBC mockumentary) The Office, Brent still clings onto the tiny taste of fame that show afforded him. Now working as a travelling salesman, he cashes in his life savings, hires a documentary film crew, assembles a group of session musicians and embarks on one final attempt to achieve rock superstardom. There are a few things you can pretty much guarantee with this film: firstly, it will make you laugh. You might feel bad for whatever it is you find yourself laughing at, but mark my works, you will be laughing. Secondly, it will be excruciatingly awkward. And finally, it will offend some of you. All in all, it should be a pretty good trip to the flicks! But the big question remains, does David Brent work without Gareth, Tim and Dawn?

What’s it about? You remember all those movies from the 80s, such as Freaky Friday, Vice Versa, and All of Me, where people magically swap bodies and learn valuable life lessons after spending time seeing the world from someone else’s perspective? Well Nine Lives is basically another one of those. But with a cat. Oscar winning actor and theatre legend Kevin Spacey plays a business tycoon who has isolated himself from his family. One trip to a mysterious pet shop later, and boom, he’s a cat. He has one week to reconcile himself with his family or end up as a feline forever. Set your expectation phasers to low.

Who’s in it? Kevin Spacey, Jennifer Garner and Christopher Walken

The Childhood of a Leader

What’s it about? The extraordinary directorial debut of Brady Corbet, co-written with his wife Mona Fastvold, imagines the childhood of someone who will one day become a fascist leader. Set in the immediate aftermath of World War I, an American diplomat and his wife are in France to establish the terms set out in the Treaty of Versailles. With their ten-year child in tow, they try to build a new world in this ruined continent. The child is changed by the things he sees and experiences. His beliefs and understanding of the world are moulded into a warped and terrifying ego. A stunningly well made film with an all-star cast, this has already earned rave reviews on the festival circuit. The Childhood of a Leader is a chilling portrait of the birth of evil.

Tickled
Extraordinary documentary about the mysterious world of competitive tickling. Yes, you read that right.

Swallows and Amazons
The latest adaptation of the classic novel, starring Kelly Macdonald

Advertisement. Scroll to continue reading.
In this article:David Brent: Life on the Road, Lights Out, Nine Lives, Swallows and Amazons, The Childhood of a Leader, Tickled