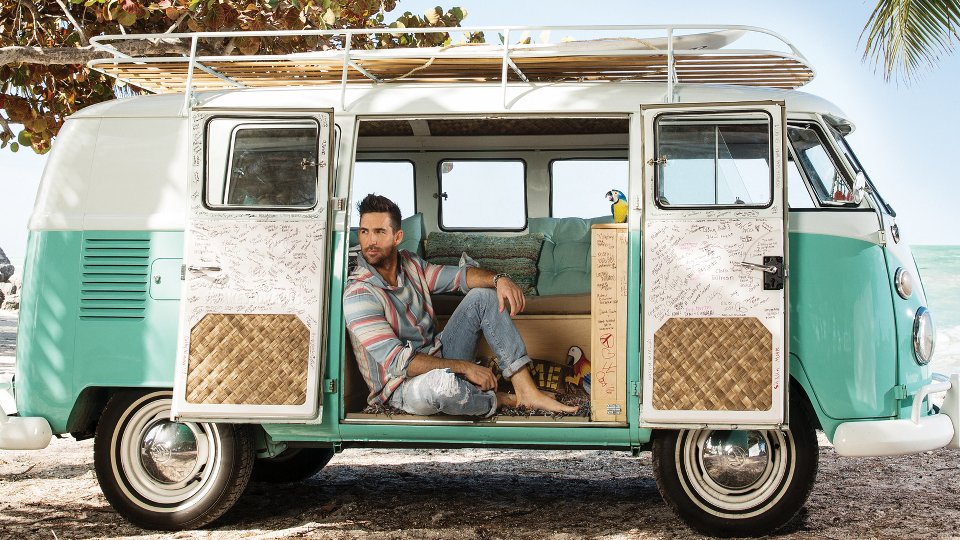 Jake Owen is back this week with his fifth studio album American Love.

The follow-up to 2013 release Days of Gold, American Love is a feel-good up-tempo record that puts Owen’s personal troubles behind him – he went through a divorce last year. The lead single American Country Love Song sees the singer-songwriter back on top form and has quickly become one of the songs of the summer.

I’ve been listening to your new album American Love and it seems like it’s a concept record. What’s the story behind it?

It’s a concept album in the sense that I knew I had to make the best album possible. After having four straight number ones in a row I’d really like to get back to that so I put a lot of emphasis on making the best songs possible.

You’ve had a difficult time in your personal life since the last record. Has that shaped the songs and the sound of American Love?

No, not really. People ask me that a lot. Between this and the last record, and going through that (the divorce), when you’re making music a lot of that is to do with how you’re feeling. It was harder to make an album when you’re going through that kind of thing. There’s a couple of songs on there that might somewhat have parallels to what was going on in my life at the time, but the rest of the record is about having fun, living life and being happy.

The album does have a feel-good vibe and there are lots of different sounds on there for you. Were you consciously trying to do something different than you’ve done before?

Yeah, I think it’s always important to push the envelope a little bit and me being a guy from the beach in Florida I want to continually put those threads behind my music. You’ve probably heard some horn sounds in there and things like that. I just wanted to push the boundaries a little bit whilst still maintaining what I do and that’s what I came up with.

The album’s lead single, American Country Love Song, is racing up the charts. What’s the story behind that song?

I was sitting on my bus one day in Redding, California and I got an email from my friend Jaren Johnston, the lead singer of The Cadillac Three. He wrote that song and the minute I heard it I knew it was something that would work for me so I spent the next six months basically trying not only to record the song but get approval to record the song. Some other artists had it and were ready to record it so I had to fight my way to get it, and once I got it we recorded it and put it out as a single. I’m glad it worked out that way because it’s doing pretty well for me.

American Country Love Song is so perfect for the summer. Is that a coincidence or was it part of your master plan for this record?

I think a lot of things that happened with the record are a coincidence but I also believe it was a planned coincidence (laughs) if that makes any sense? From the cover of the record, the trip I took for American Country Love Song and driving that Volkswagen van down to Key West – I’ve got a song called VW Van on the album – and the cover has a picture of me in it. It was really cool and worked out in a way that wasn’t planned but was also a coincidence.

You collaborate with Chris Stapleton on If He Ain’t Gonna Love You, which is a highlight on the album. Your voices work really well together. How did that track come about?

Thanks man! I recorded that song a couple of years ago actually and I’ve just had it forever. It didn’t make the last record so I’m glad it made it’s way on to this record. He wrote the song and I asked him to sing background vocals on it. You’re right he does sound so good and he makes me sound better.

When you recorded that song, Chris wasn’t the huge star that he is now. Due to his breakthrough in the charts, did that make you keen to include the track on this record?

Yeah. I’ve always been a huge fan. In the public’s eyes he may not have made it but in my eyes the guy has always been better and more talented than most people you could ever imagine. I was just really excited to be able to sing with him a couple of years ago.

One of my favourite songs on the record is When You Love Someone. It’s the kind of big emotional ballad that you do so well and it’s quite different to the other tracks on American Love. What’s the story behind that song?

I know the feeling of when you love someone and what that means and how you’re supposed to treat them. I thought that a song like that was pretty poignant, just the lyrics with no need for lots of other musical stuff in the background. It just needed piano and a vocal. I think it makes it a lot more touching when it’s that way.

American Love is your fifth album. Do you feel constant pressure with each album to top what you did before or do you just follow your gut and instincts?

I’m always a kind of natural instinct kind of guy. I roll with what feels natural to me.

When it comes to putting together a new record do you reflect on what’s worked well on previous albums or start from a clean slate every time?

That’s a good question! I think I definitely approach the music with an idea of what I like and how I feel. The beauty of making an album sometimes, whether you’re writing songs or finding them, is that you never know where they’re going to come from and sometimes they show their face in the most interesting way. I love the surprise factor to making an album.

You mentioned earlier that He Ain’t Gonna Love You is a song you’ve had for a while. Do you collect songs along the way and store them so you can revisit them for later projects?

I try to, whether it’s writing songs or finding outside songs, I want to find the best songs possible. From the minute I finish the record until the next time. I know there are songs that didn’t make this record that I’ve been in love with for a couple of years and might make the next record. You never know!

When it comes to selecting the tracks for a record, are you a fan of playing new material live to see what reaction it gets?

Yeah I do. I like playing stuff live and testing it out for people. It’s kind of like test-driving a car or something. You get to see how it works before you really release it.

Have you ever played a new song in a live set and it’s not gone down quite like you hoped?

Yeah. I’ve done songs too that have gone over better than I expected. You just never know! That’s the beautiful thing about music.

Do you have any plans to tour over here in the UK?

Maybe we might see you performing as part of C2C: Country to Country next year?

I’ve heard about that and I’d love to do that. I know I’ve got a lot of fans over there and I see it all the time on social media, people asking me to come over and it’s very flattering. It’s why I appreciate you taking the time to help me spread the word over there.

What would you like your fans to take away from American Love?

I just hope they come away knowing that I worked really hard on this record and I was going through a lot while making it. It’s what helped me get through a lot of things and it’s what makes me happy to step out and play every night. I hope it makes them just as happy as it makes me.