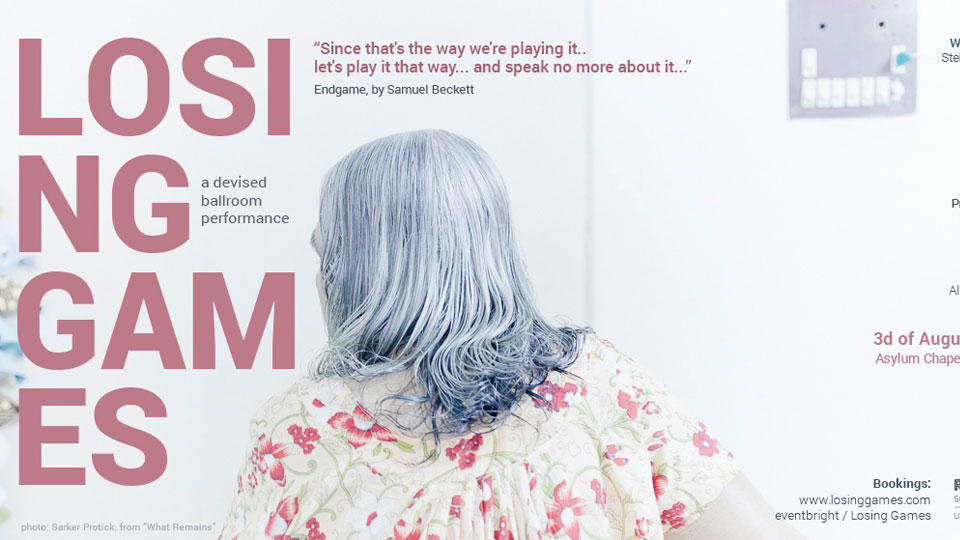 On Wednesday 3rd of August 2016 at 7.00pm you can see a performance of Losing Games at Asylum Chapel, Caroline Garden’s Chapel, London SE15 2SQ.

“It’s all your generation’s fault”. Or is it not?

Love games, social games, political games, family games, professional games. Who sets the rules and how badly do we want to play? What’s the winner’s prize?

Losing Games is a devised ballroom performance that examines the set political, social and economic structures through a playful game frame. The ever cultivated desire of people to win the games they play, is fuelled with promises that the one success will bring the others, but what happens when the promise doesn’t deliver? The performance explores issues of memory, European history and the notion of playing games. It aims to link today’s reality with major historical events of the past century, and the aftermath decisions that shaped the current social and economical landscape. Is everything a game?

Losing Games is a performance where two actors will meet, go through history, converse with their ancestors, play, narrate stories and dance together.

The performance was first initiated as part of Stella Christodoulopoulou’s MA’s Sustained Independent Project at the Royal Central School of Speech and Drama. As a result the 1st Draft of the performance was successfully presented in June 2016 at the RCSSD.

Losing Games, written and directed by Stella Christodoulopoulou is supported by a team of Greek creatives & artists residing in the UK and Greece.

Buy tickets through Eventbrite. See www.losinggames.com for more information about the show.