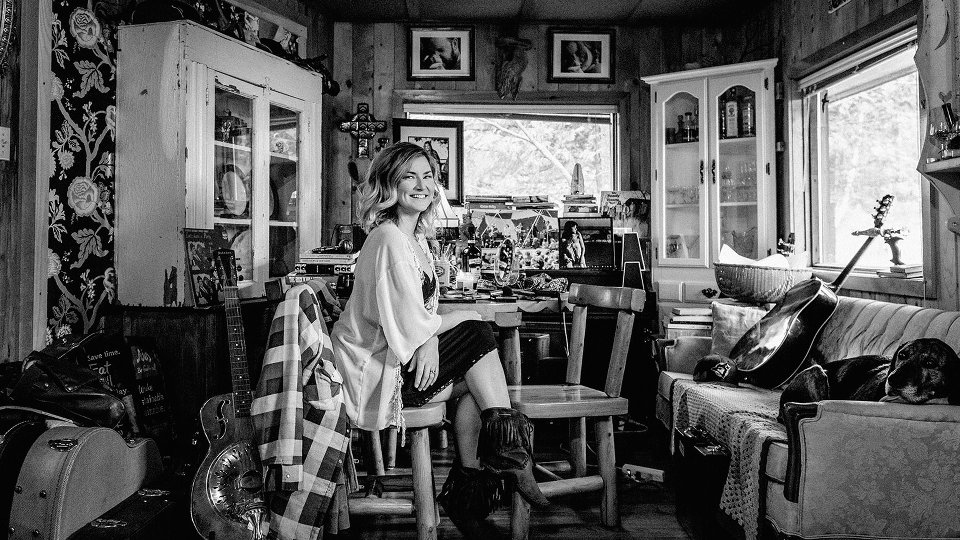 Hailing from two musically renowned family lines, spanning three generations from Northern Ontario, Nova Scotia and the Ottawa Valley, Kelly has music in her blood and she’s been performing as part of a group known as The Claytones for the past few years. Now she’s ready to step into the solo spotlight with the release of Hillbilly Jewels.

I caught up with Kelly to find out more about Battle Road, discuss her upcoming EP release, and to talk about her musical heritage.

Hi Kelly. How are you today and where does this Q&A find you?

I’m doing very well, thank you. I’m back in Toronto, ON after a weekend of shows about 5 hours north of here.

You’ve just unveiled the music video for your new single Battle Road. Tell us the story behind the song and the concept for the video.

My brother and I wrote this one a few years ago. It’s a very honest song about the true struggles of being in love with someone. It’s not the beginning of a relationship but it isn’t the end, it’s somewhere in the middle. I think many can relate to this. Sometimes you just get sick of fighting with the person you love.

Battle Road is the first single from your new EP Hillbilly Jewels. What can we expect from the EP both sonically and lyrically?

We recorded it in Nashville at Ocean Way Studios with some of the best musicians. I’m very lucky to have Buddy Miller as a guest vocalist and Jim Cuddy from Blue Rodeo. I have a great team of co-writers I use a lot, especially my brother. We work really well together. He played a huge role in the making of this. I’m proud of this EP I can’t wait to share the rest of it.

What’s you’re favourite track on the EP and why?

My favourite is Hillbilly Jewels which is a song my brother wrote. It’s about our musical lineage and carrying on the tradition that both of our Grandfathers passed to our parents and now us. I love the song, I love singing it, it’s really close to my heart.

You’ve released some collaborative records over the past few years. Why did you decide to go it solo for this EP?

I was in a band called The Claytones for a few years and I absolutely love making music with them (I still do!) We were all individual artists before we started the Claytones and we each had a few side projects we worked on when we had the time. We released 2 albums (Lake in the Night & Reserva) we toured and worked really hard together for a few years. When we decided to take some time off, that’s when I decided to focus once again on my own stuff.

You come from a very musical family. When did you know that music was something you wanted to pursue as a career?

I think the question was, what else would I do? There was never a doubt in my mind that music was the answer. I loved my childhood, I loved growing up in a studio and on a tour bus surrounded by musicians. I’ve been incredibly lucky to have such a supportive family. It wasn’t until I was about 21 that I really started to take it seriously, but I always knew.

What are you like when you’re in the studio? Do you like to be very hands on or are you more collaborative?

For this EP, I stepped away from the producer’s chair for the first time. I left it in the very capable hands of my brother. That being said, I was still very hands on but it was a nice change for me. I trusted him and knew the outcome would be something wonderful. We collaborate well and have so much fun in the studio together.

You’ve done some theatre work too playing Emmylou Harris in Grievous Angel: The Legend of Gram Parsons. What was that experience like and is it something you’d like to do again in the future?

I loved it! It’s actually how I met my duet partner in crime, Anders Drerup who was in The Claytones with me. I am so grateful for that experience. I was very young and just starting out when we toured with Grievous Angel. I cut my teeth playing with those guys and touring with that production. I learned a lot. I’m happy to say that we’ve just decided to start it back up. It would be a dream come true to bring it to the UK.

When are you planning to head over to the UK to perform some live shows?

I’m hoping as soon as possible! Once the EP is out, hopefully word will spread over there and I’ll be able to book a tour. I’ve only been there once and it was with my football team (we got our butts kicked!) I’m looking forward to returning for a more successful, music filled trip ha!

I have a busy summer of festivals and shows in Canada, which I’m looking forward to. I’m also excited to play a few more shows with The Claytones and with Grievous Angel this fall. I’m focusing on writing a lot more this year, which means I’ll be back and forth from Nashville a few more times I’m sure, followed by a month long tour in Nov./Dec. which raises money for Food Banks across North America. It’s a busy and exciting year!

Kelly’s single Battle Road is available now and her EP Hillbilly Jewels is released this summer. Watch the music video for Battle Road below:

Advertisement. Scroll to continue reading.
In this article:Kelly Prescott