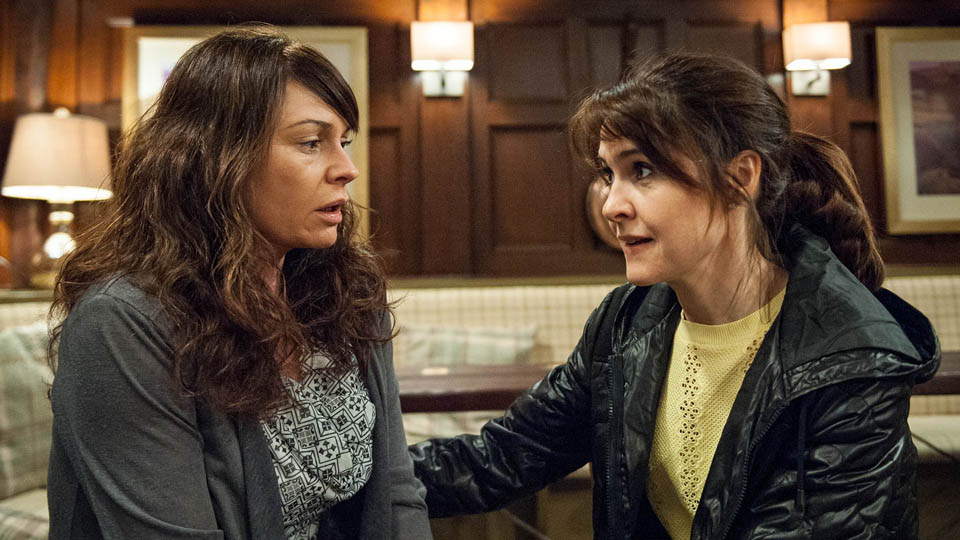 Welcome to our look ahead to what’s going to happen in Emmerdale next week.  Chas is having a stressful time, Emma’s lies come back to haunt her and David faces up to life with cancer.

Chas is out of sorts following her date with DS Wise, but it seems there could be something else bothering her.  She gets drunk and morose, leaving Charity to take her in the backroom and let her sleep it off.

Later, James is driving along a country lane in high spirits as he’s planning something big.  Suddenly, Chas steps out in front of him and he accidentally knocks her down.  He takes her to the hospital where a nurse asks if Chas could be pregnant  leaving James dumbstruck when she replies she might be.  If she is, it can only be with Gordon’s baby.  She decides she needs to do a pregnancy test.

James arranges to see Emma in the pub later and she waits excitedly in The Woolpack suspicious that he’s planning something.  However, James then texts Emma to cancel their date as he and Chas are seen entering Dale View by Finn.  Later, Finn’s calls to James go unanswered and he ends up telling Emma what he saw.  Emma returns to Dale View only to discover Chas’ mascara and the pregnancy test and she’s devastated.  A jealous Emma is a vengeful Emma!

Emma manages to bribe Dr Bailey to get the afternoon off and heads to the Woolpack, where she finds James chatting with Chas.  She fakes a funny turn and Pete then tells a concerned James that Emma hasn’t been well lately (based on the lies she told him).  Emma tries to allay his fears when James confronts her, but it is no good and soon he’s headed to see Dr Bailey to get some answers.  Will Dr Bailey reveal all?

Later, the Barton brothers are outraged to hear that Emma faked her illness and she’s shocked when none of them object to her leaving.  Charity finds the pub has been trashed in the night but Chas stops her phoning the police, suspecting that she did it herself and that her PTSD is back.  She runs outside and finds Emma and insists that she needs to go to hospital.  Emma comes across as her guardian angel but what has she really been up to?

Bernice discovers who Ronnie is

Lawrence comes to Ronnie’s aid when he is struggling with a digger outside Mill and the pair share a drink afterwards.  Could there still be a spark there?

Bernice twigs that Ronnie must be Lawrence’s ex-lover when Lisa tells her Ronnie is gay and then she sees Lawrence burning old love letters.  Bernice is furious that Lawrence went ahead with marrying her.

Later, Nicola is digging for details of Bernice and Lawrence’s bedroom antics and despite Bernice’s cheery demeanour it’s only a matter of time before Nicola believes that Lawrence has cheated on Bernice.

Bernice heads to the pub to drown her sorrows and when she is given the keys to the digger to return to Lawrence she sets off with determination.  She staggers out of the pub and fuelled with anger and booze she climbs on board the digger, ready to do damage…

A close shave for David and Jacob

Jacob continues to worry about David not taking care of himself and tries to shock him into action by lighting a cigarette in front of Tracy and later explaining to David that he’s only risking his life just as David is.  Tracy steps in to console David over Jacob’s behaviour and as the pair share a kiss, she is shocked when a tuft of his hair falls out in her hand.  David is embarrassed and tells her to go.  They can’t be a couple right now.

Lachlan winds Jacob up and Tracy has to step in when the pair start fighting.  She sees Jacob is clearly worried about David and she tells him about the hair loss.  David is touched when he walks in to find Jacob has shaved his head to show his support.  David is encouraged and decides to shave his own head too.

Finn is angry that Charity has double booked her own son, Moses’ party with Bob’s Queen party.  It looks like Kerry has gotten the wrong idea over the theme of the latter!

Things are looking up for Holly when she passes another urine test and Victoria even offers her a job.  Moira is relieved and begins to trust her daughter again, but Cain is less of a believer and doesn’t want Holly looking after Kyle, asking Moira instead.  When Moira is called off and puts Holly in charge, how will Cain react?

Sam and Belle are impressed by Lisa’s strength when she gets her divorce papers and decides she’ll be shedding no more tears for Zak Dingle!

Vanessa and Rhona make friends again and Rhona celebrates by locking lips with Pierce.  Not sure Vanessa will be too pleased about that.

Lachlan is annoyed that Belle hasn’t dumped Dr Bailey.  Meanwhile, Zak and Lisa want to stop Angie from going to the police and Belle reluctantly agrees to go to the Bailey’s house and tells her that she’s getting help.