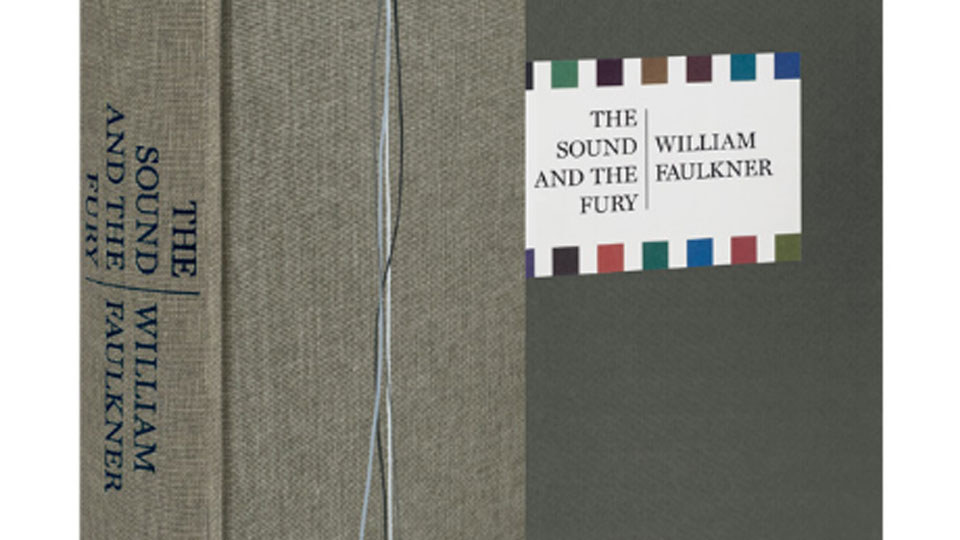 The Folio Society has released William Faulkner’s The Sound and the Fury as part of its May 2016 collection.

Attractively bound in blocked cloth and contained within a protective card case, The Folio Society’s presentation of the book is beautiful, with an easy-on-the-eye font on high-quality paper. Not only that, but this particular title has been presented in an innovative new way – and as the author originally intended.

The Sound and the Fury is a book with a difficult narrative thread. The reader has to work hard, especially in the first part, to follow a non-linear text told from the point of view of Benjy, a young man with learning difficulties. To aid the reader, The Folio Society’s edition separates the text into different colours of ink and comes with a specially-designed key code, so that the reader is able to immediately discern which event the narrative has turned to. This is especially helpful as Benjy’s thoughts are often jumbled, and cut through timelines sometimes mid-sentence, with a chronology that spans decades. After a while, there’s no need to refer to the key code. Your mind automatically picks up the event based on the colour.

The different ink colours doesn’t wholly overcome the trickiness of following the story, even if it does help with the chronology. Faulkner’s style, faithfully reproduced by The Folio Society, eschews punctuation in parts, whilst using the colloquial dialogue of Mississippi and plenty of repetition as it replicates different states of mind with psychological veracity. Yet the novel rewards the reader as the story of the Compson family unfolds.

Set more or less contemporaneously with when the novel was published in the late 1920s, The Sound and the Fury takes places over four parts. The difficulty of the first part is following the thoughts of Benjy, whilst the second is narrated by the intelligent and educated yet depressed Quentin. Towards the end of his section, punctuation and grammar break down and the narrative becomes odd, and apparently random. The final section offers the biggest contrast, since it’s the only one told from the perspective of someone outside the Compson family: in this case the black maid, Dilsey. It’s only once the conclusion is reached that the reader can begin to put the whole story into perspective.

Whilst The Sound and the Fury details the minutiae of a single family, its themes are large and universal. An interest in material wealth and the role of religious faith are ever present: leaving it an unmistakeably American novel, though one that doesn’t pull its punches on social issues.

This edition comes with a glossary and commentary to accompany Faulkner’s text. The commentary is perhaps not helpful on a first read, since it requires turning to the back and interrupting the reader’s flow; however, it’s a useful resource, especially for students of literature or those returning to the text or keen to read it with more critical insight.

Whilst not the easiest or most accessible of books, The Sound and the Fury repays the reader with a vivid snapshot of family life in 1920s Mississippi. This edition, which faithfully based its typeset upon Faulkner’s original vision, is the ideal place to go to celebrate this awkward, intriguing and undoubted literary classic.

In this article:20th Century Fiction, American Fiction, The Folio Society, The Sound and the Fury, William Faulkner