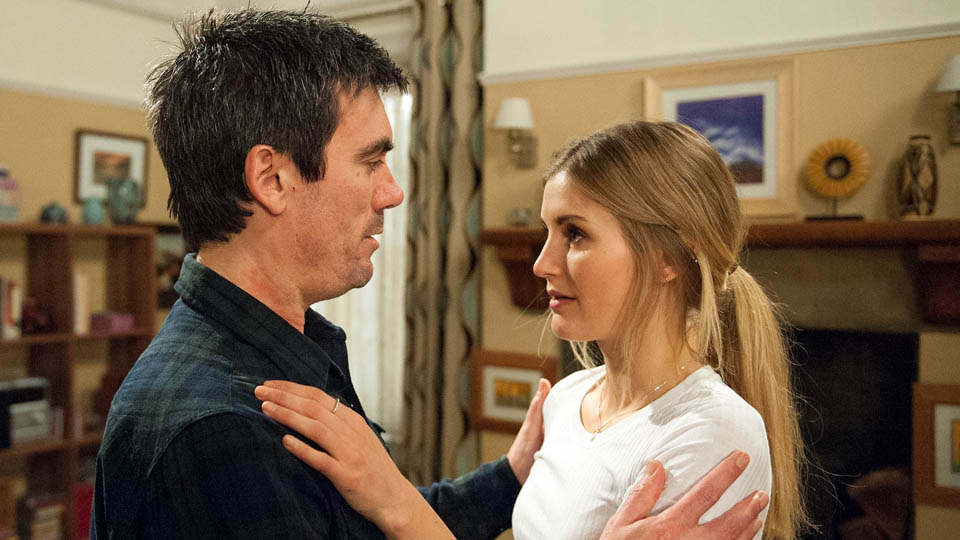 Want to know what you can expect in Emmerdale next week?  Course you do! It’s a big week for Holly, Cain and Moira.  Plus Ashley is unaware he’s being chaperoned (and taken advantage of) and Lawrence hasn’t learnt from the Andy debacle.

Holly makes a move on Cain

When Charity accuses Holly of stealing the missing gig tickets she’s not prepared for Holly’s comeback.  She sets about putting Holly in her place and when she learns Holly is going to assist Victoria in her food van, a plan forms.  When she sees the van’s petty cash box unmanned she makes her move.  When they realise the cash is missing the finger is pointed straight at Holly.

Holly is touched when Cain stands up for her over the missing cash and is left desperate for revenge when she realises that it was Charity that took the money.  She follows her to Bernice’s salon and when Bernice steps out for a minute she applies blue dye to an oblivious Charity’s hair.  Cain is impressed when she shows him a picture of what she’s done with Charity’s hair and even defends her from an angry Charity.

Misjudging the situation, Holly leans in for a kiss.  How will Cain react?  Later, Cain tells Moira what Charity did but neglects to mention that Holly made a pass at him.  However, Holly assumes he’s told Moira, so tries to say that he came on to her.  As the pair argue, Holly runs off with Pete and then leaves her mum a message begging her to call back.  Cain deletes the message before listening to the end, unaware of the content and the potential consequences.  As Holly waits for Moira to call back, she takes a wrap of heroin out of her bag…

Pete discovers heroin dropped by Holly and panics.  He enlists Ross and the two set out to find her, fearing the worst.  Moira is shocked to hear Holly’s been taken to hospital and Cain feels guilty about deleting the voice message.  Will Holly blame her mum for ignoring her message?

Bernice tries to convince Lawrence that they should tell Chrissie about Ronnie, but he’s got other plans.  When Ronnie tells Lawrence he should tell his family the truth, he twists it and lies to Bernice that Ronnie is blackmailing him.  Lawrence’s mood isn’t improved when he learns that Sam has crashed one of the quad bikes and he sacks him for it.

Sam recommends Ronnie to Rakesh and soon he’s overseeing the Mill conversion, leaving a furious Lawrence to come up with a drastic plan to get rid of Ronnie for good.  Later, Ronnie is terrified when Sam is pointing a shotgun at him saying he has a message from Lawrence White.  Ronnie senses that Sam is no killer and manages to get him to put the gun down and is appalled to learn Sam has been bullied into making the threat.  He decides to confront Lawrence and is shocked at his hostility.

Nicola comforts Laurel over Ashley forgetting the social worker’s visit and says that it might be a good thing.  Doug is worried for his daughter and decides her and Nicola need a night out on the town.  When Doug realises he’s doublebooked himself, Jimmy is roped in to chaperone Ashley with Arthur.

A reluctant Jimmy soon realises he’s on to a good thing when they share a beer and he starts enjoying himself.  Ashley is of course completely unaware that he’s being watched over whilst he has Arthur.  Jimmy uses his new role to excuse himself from his chores, but his plans to go to the cricket are thwarted by Nicola.

When Ashley gets suspicious of the amount of time Jimmy’s spending with him, Jimmy quickly blames marital problems with Nicola.  When Dan mentions he needs somewhere to study, Jimmy sees an opportunity to share looking after Ashley and discreetly tells Dan.

Nicola is puzzled to see Ashley with Dan and realises Jimmy hasn’t been with him.  Wouldn’t want to be Jimmy when she gets hold of him!

Someone is sending Liv messages pretending to be her dad and she confides in Gabby who urges her to tell someone.  Gabby also gives Liv an idea about how she can make new friends; throw a party!  Liv decides to steal booze from the pub.

Rodney returns to the village and a lukewarm reception.

Carly suggests Tracy can move in with her and Vanessa, who is unimpressed but soon comes round to the idea.

Megan tries to convince Sam that she’s never getting back with Jai.