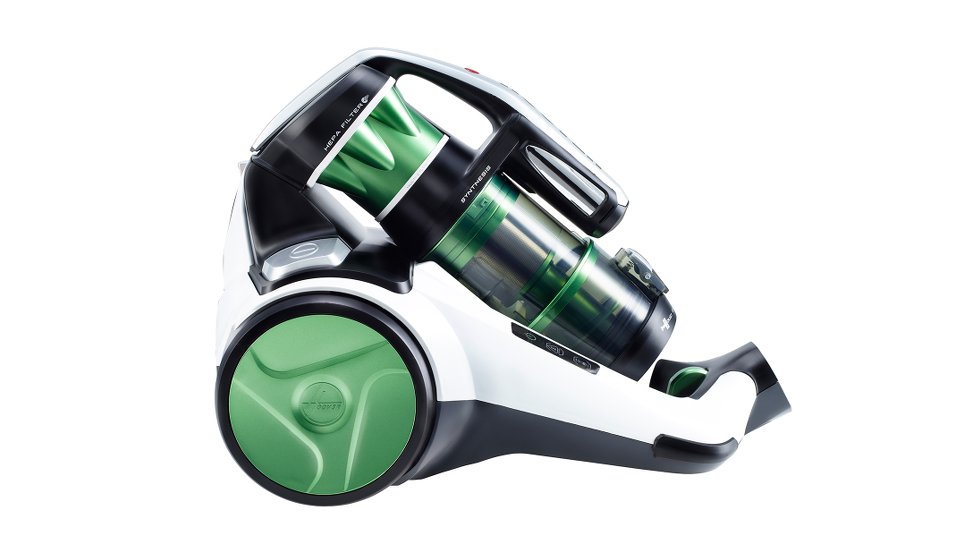 The Hoover Synthesis sells itself on energy efficiency and on its innovative use of dust compaction technology, which pushes the dirt to the foot of the bagless cylinder making it easier to dispose of and to clean the device.

The overall suction is good, and all of the heads, including the one specifically for hard floors, are efficient at picking up fine particles such as soil and dust. The device is quiet and energy efficient: a strong departure from the roaring motors of older vacuum cleaners.

So far so good, but there are a few key areas where the Synthesis disappoints. The first is in manoeuvrability. The body is heavy and an awkward shape, making it difficult to store easily, and even harder to pull around the house. The two wheels at the base protrude, and relentlessly catch on table legs and other furniture. The small front wheel proves no use in waggling the device free – effectively the only direction it can be pulled is forwards. This is not the vacuum cleaner for anyone with a bad back or otherwise incapacitated.

The major negative point of the Synthesis though is it’s main suction action. The large head for carpet cleaning says that the patent is currently pending. It is a new method of gathering household dirt. There’s no brush, only a rubber lip designed to flick particules into the path of the air suction. The problem is: it doesn’t. It’s possible to go over the same small piece of fluff a dozen times without the Synthesis picking it up. The suction peters out towards the edges of the large head too. Where the Synthesis innovates in quiet and energy-efficient vacuuming, it falls down on performance. Put simply: there’s yet to be developed an adequate replacement for rotating bristles, and to that conundrum, the Synthesis is not the solution.

The smaller heads, which don’t diffuse the vacuum over such a wide area, are much more efficient, though it’s impractical to use them for large areas of flooring.

The Synthesis is easy to empty, and the compacted dirt, which is pushed to the base of the cylinder, makes for an easy and clean process. However, refitting the cylinder to the body of the device is a knack that can take a while to master.

Overall, we were disappointed by the suction power on large carpet areas, and found the device heavy and difficult to pull around. However, for smaller areas such as carpet on the stairs and awkward corners, the performance is very good.

Advertisement. Scroll to continue reading.
In this article:Hoover