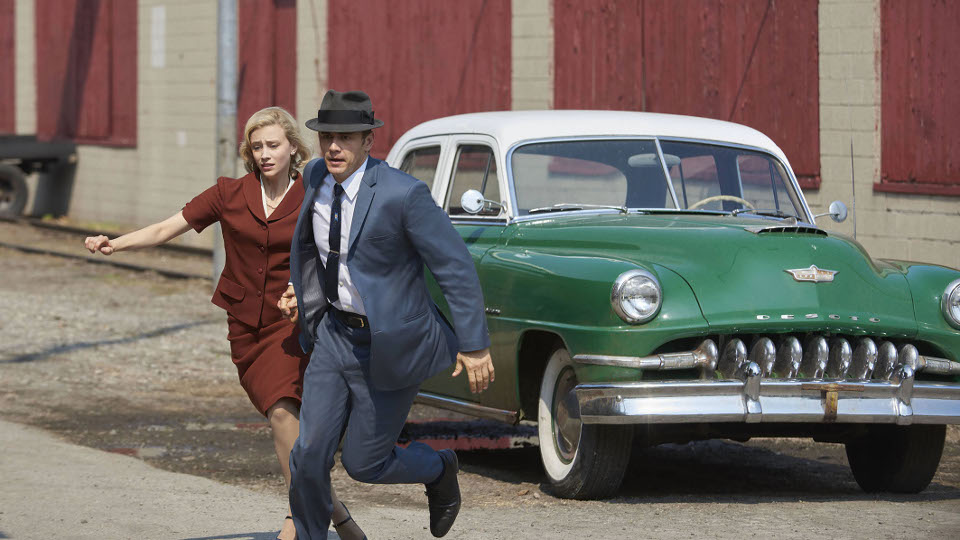 The latest episode of 11.22.63 opened up with Lee Harvey Oswald practicing assembling his sniper rifle. Once done he took it outside to have his wife Marina take the infamous picture of him with it. George de Mohrenschildt was also there and stood watching while Oswald said he would hunt fascists.

Jake (James Franco) and Bill were watching from their new apartment below the Oswalds. Bill’s was becoming more obsessed with Marina and she waved when she caught him watching her.

Jake left Bill to watch while he headed to school, there he came across Sadie playing piano. They kissed and then Jake tapped out a little rendition of ‘I Saw Her Standing There’ by the Beatles. Sadie was impressed and asked if he made it up.

Principal Deke Simmons walked in on them kissing and took Jake to one side. He reminded him that they are role models for the students and that he should be more discreet. He handed him a card for a hotel where they could be alone.

Back home an excited Bill was waiting for Jake. He had a recording of Mohrenschildt offering Oswald to meet his powerful friends. Jake felt his theory about the CIA using Oswald to take out Walker was correct.

Miss Mimi turned up at the house and confronted Jake as she had discovered he was using a fake name. Jake admitted it and concocted a cover story using elements of The Godfather: Part II. He told her he was in FBI witness protection because of testifying against the Mafia. She had no idea what he was on about but agreed to keep his secret quiet.

Jake took Sadie away to the place Simmons suggested. She was blown away by his effort and they danced together before having sex. Jake was going to tell her some truths about himself but stopped when he noticed a letter under the door. He opened it and found pictures of he and Sadie. Scared he presumed the CIA were warning him off Oswald. He left a disappointed Sadie in a hurry.

Jake and Bill followed Mohrenschildt and Oswald to a brothel. They gained access by overhearing Mohrenschildt say the required password of ‘Candy Bar’. Inside it was hard to keep tabs on them so Jake pretended to want to take one of the ladies upstairs. Things went wrong when Jake refused her and he ended up arrested. The next day he was collected at the police station by an annoyed Simmons.

Back at school Jake spotted Sadie with her abusive ex-husband, Johnny Clayton. He’d tracked her down and was refusing to finalize their divorce.

Outside Sadie told Jake more about her relationship problems and then drove away upset thinking Jake wouldn’t want anything to do with her.

Clayton later tracked Jake down and told him Sadie was his property. He also confessed to taking the pictures of them together. An aggressive Jake humiliated him and strongly encouraged him to sign the divorce papers. It worked and a delighted Sadie received them later on.

Jake went to Sadie’s house with flowers and chocolates to declare his love for her and this fixed things between them.

Bill’s obsession with Marina got worse and Jake had to stop him from interfering when they heard them fighting. Bill was cheered up after the fight by giving Marina a shoulder to cry on along with a cigarette.

At the end of the episode Sadie discovered the recordings of Oswald in the basement of Jake’s house. While she was looking round the mysterious ‘You don’t belong here’ man from the first episode appeared to be creeping around in the shadows. Looks like Jake has some explaining to do.

The next episode is The Truth. Everything begins to fall apart as Jake struggles to live two lives: teacher and time traveller.