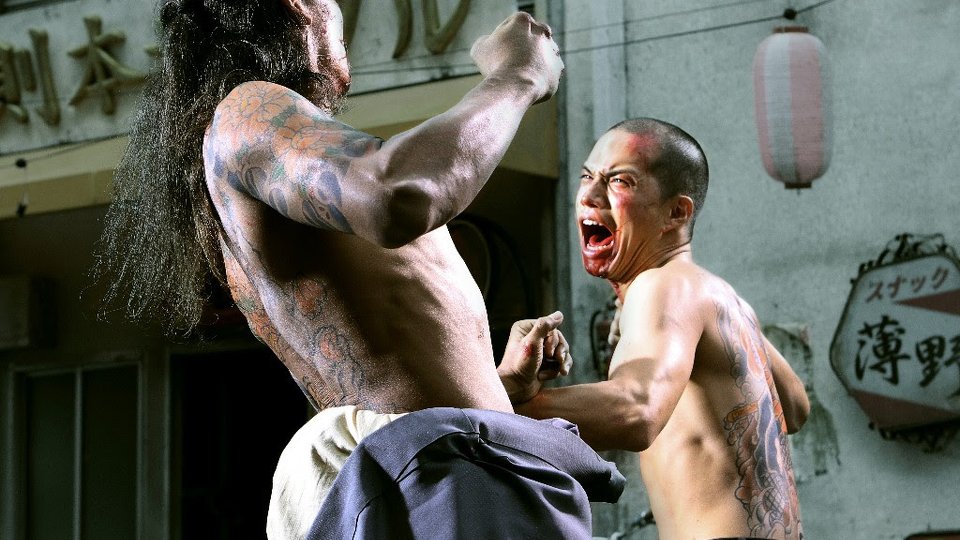 What the hell did I just watch? Directed by Takashi Miike, the prolific agent-provocateur of Japanese cinema, responsible for Audition and Ichi the Killer, this is an almost unclassifiable piece of cinema.

I was sold on the title alone. Yakuza Apocalypse is a phenomenal title, and comes with a certain level of expectation. You just know going in that a film called Yakuza Apocalypse is going to be mental, violent and funny. How can it not be? What I wasn’t prepared for, was just how demented and bizarre this film turned out to be. Wait…that is too polite. It is bat-shit crazy!

It starts promisingly though, in a provincial Japanese town controlled by the Yakuza, where we meet Kamiura (Rirî Furankî) the local boss. A rival gang ambushes him and tries to assassinate him. In a wonderfully violent exchange, they slice him, stab him and shoot him to pieces. But he just keeps getting up and fighting back, until he has destroyed the entire rival gang. How can he survive all this? Well, he’s only a bloody blood-sucking vampire.

I’m excited at this point. A Japanese gangster film with vampires? What could possibly go wrong? Well that’s an interesting question, and the answer depends entirely on your own sensibilities. If you like Japanese gangster films, vampire films, or even a hybrid of the two, then EVERYTHING goes wrong with Yakuza Apocalypse.

However, if you like films that: a) make strange and distancing stylistic choices; b) confound all narrative expectations; c) have a knitting circle of men waiting to be made into blood tea; d) feature a witchfinder general with a coffin on his back, a Kappa Goblin (look it up, I had to), and a man dressed as a giant frog; e) have bizarre sequences of stop motion animation; and finally f) also happen to be a comedic satire on the economic downturn, then my goodness this is the greatest film you will ever see.

I laughed a lot at this film, but also found it to be impenetrably weird – often at the same time. For example, the international syndicate (comprising the witchfinder dude, the Kappa, and a martial arts expert played by Yayan Ruhian from The Raid) that has come to kill the vampire keep referring to the arrival of the “modern monster – the world’s toughest terrorist.” This turns out to be the aforementioned bloke in a frog costume. When the rival gangs are about to fight in the street, and the frog comes round the corner riding a bike, I completely lost it. Hilarious and bonkers in equal measure.

But what simply cannot be ignored about this film is that it is is a fiercely original piece of work. It is unlike anything you have ever seen, and for that reason alone, I have to recommend this film. In spite of everything that is wrong and peculiar and unconventional about this film, it is an entirely unique viewing experience.

And that makes it impossible to rate, and pretty much pointless to review. It is both a 1 Star abomination, and a 5 Star slice of wildly unpredictable and outlandish cinema. So naturally I’ll give it 3 stars.

Advertisement. Scroll to continue reading.
In this article:Yakuza Apocalypse