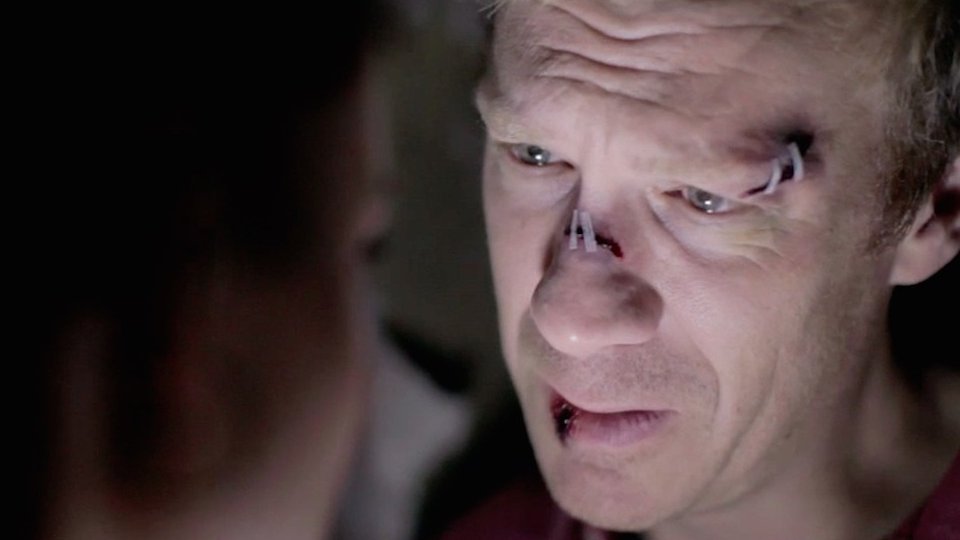 First time director & co-writer Oliver Frampton shows a huge amount of promise in this bleak and chilling slice of British horror. Making excellent use of locations, sound design and an almost verité visual style, The Forgotten will creep under your skin and once again make you afraid of things going bump in the night.

The script, co-written with James Hall (another first-timer), builds mystery and tension as we try to figure out what has happened to these characters. What has led them to this awful situation? And what the hell is going on next door?

The main character is Tommy (Clem Tibber), an awkward and sullen teenager who has to go and live with his Dad. For reasons unknown, Mum is no longer on the scene. Unfortunately for Tommy, his Dad (Shaun Dingwall) has no fixed abode, and they are forced to squat in a condemned housing estate.

The flat is horrible. Dark, oppressive and claustrophobic. The walls are damp and peeling. They have no power, so all the lighting comes from handheld camping lanterns – a genius touch, that adds an almost gothic flavour to this very urban locale.

Soon enough, Tommy begins to hear things coming from next door – footsteps, scratching and tapping on the wall. But the building is supposed to be empty. Tommy and his Dad are the only people in the entire derelict estate. This leads to some genuinely blood chilling moments. The excellent use of light and dark, and sensational sound design really builds up the sense of dread and fear, rather than just hitting the audience with cheap cattle prod jumps.

One of my favourite moments is when Tommy uses real life logic instead of horror movie logic, and chooses to sleep rough rather than go back in the flat. I was genuinely heartened to see such common sense on display. He only goes back with his friend Carmen (Elarica Johnson), who agrees to spend the night and investigate what is happening.

There are a few more extremely well executed scares, and a piece of production design (in the flat next door) that is nightmare-inducingly effective. What lets the whole thing down sadly, is it all becomes just a bit too over-written. You can hear the gears of plot grinding as all the mysteries are explained and everything is tied together, and it just wasn’t needed.

It’s a shame that the last act doesn’t quite nail it, but a few eye-rolling moments aside, this is a very promising debut from Frampton, and definitely worth seeking out.

In this article:The Forgotten