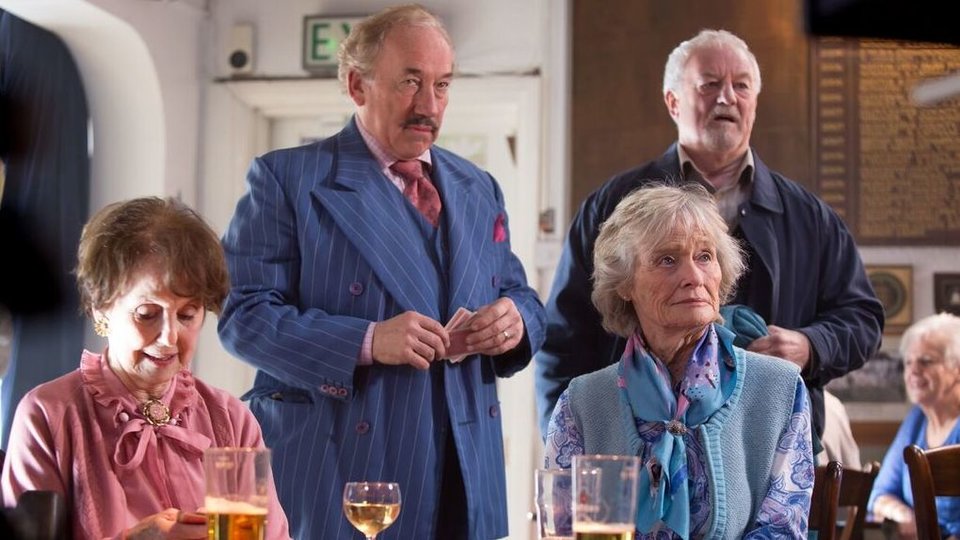 New comedy heist movie Golden Years, written and directed by John Miller and written and exec-produced by BBC personality Nick Knowles will be released nationwide in UK cinemas 29th April and will have its UK Premiere at the Odeon Tottenham Court Road on Thursday 14th April in aid of Virginia McKenna’s charity The Born Free Foundation.

Set to be the British hit movie of the Spring, profits from the Golden Years Charity Premiere will go to Born Free in order to save lives, stop suffering and protect species in the wild.

Born Free was recently described by President Obama as the most influential film of his youth, with Virginia McKenna OBE, well known actress of the ‘50s and ‘60s, appeared in films with Peter Sellers, Peter Finch, Gary Cooper, Bill Travers, Dirk Bogarde, Donald Sinden, Paul Scofield and in the Palladium production of “The King and I” with Yul Brynner.

Fate, the financial crisis and a stubborn refusal to accept the injustices of old age have forced law-abiding, retired couple Arthur and Martha Goode into a life of crime (played by Bernard Hill and Virginia McKenna).

Refusing to take the loss of their pensions lying down and simply fade away into their declining years, our characters decide to fight back and take back what’s rightfully theirs. Their plan is simple: hit a series of banks and steal back their pensions along with those of their similarly stricken friends. After all, no one would expect an elderly couple towing a caravan behind their sensible Rover of being a modern-day Bonnie-and Clyde?

Pretty soon, their friends are recruited to form a motley band of unusual suspects and they prepare to take down the biggest bank of all.

Screenwriter Nick Knowles said: “I did not set up the Hatton Garden Robbery to fund this film. I am not the mystery money man Basil. I think everyone will see their favourite mischievous uncle, granny or grandad in this movie. It’s a great cast and a great film; I know, I wrote it!”

Virginia McKenna OBE said: ‘It is quite a surprise for me to find myself in a film when I rather thought my acting days were over! However, I am thrilled to be in ‘Golden Years’, a jewel of a story, with some of our best loved and finest actors. And it is an unexpected way to mark the 50th Anniversary of the Royal Premiere of the film ‘Born Free’ in which I appeared with my husband Bill, and I am so delighted that the producers of ‘Golden Years’ have decided that their Premiere will be in aid of The Born Free Foundation’.

Golden Years is in cinemas nationwide from 29th April with its UK Premiere in aid of Born Free on 14th April.

Check out the poster and trailer below:

In this article:Golden Years, Nick Knowles