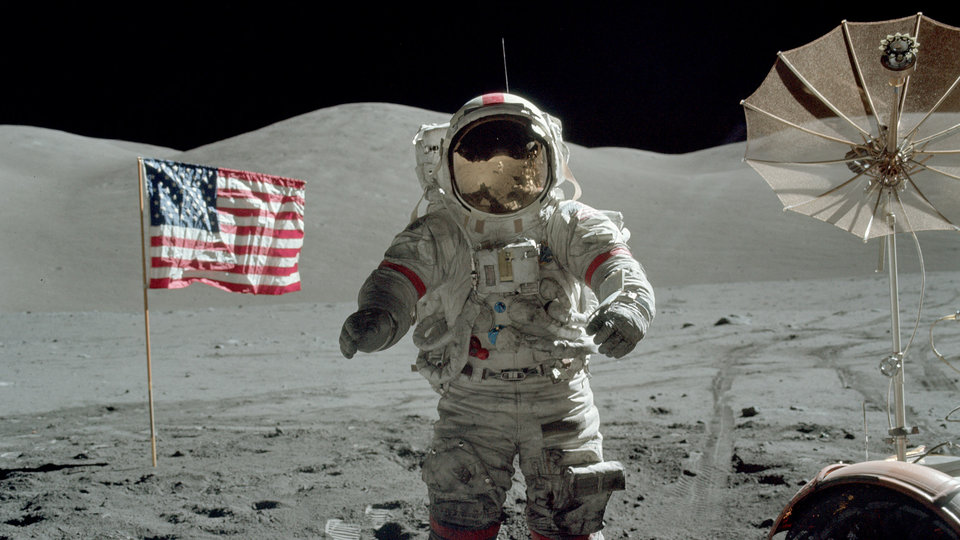 The critically-acclaimed documentary The Last Man On The Moon will be in UK cinemas from 8th April. The focus of the film, US astronaut Captain Gene Cernan, will arrive in London on Monday 11th April for an exclusive live satellite Q&A in cinemas across the UK hosted by Sir Jackie Stewart.

When Cernan became the last man to step off of the surface of the moon in December 1972, he left his footprints and his daughter’s initials in the lunar dust. Only now is he ready to share his epic and deeply personal story of fulfilment, love and loss.

Five years in the making, the documentary unveils a wealth of rare archival footage and takes Cernan back to the launch pad at Cape Kennedy (now NASA Kennedy Space Centre), to the Arlington National Cemetery, and to his Texas ranch where he tries to find respite from a past that refuses to let him go. The film features exclusive interviews with former astronauts, such as Apollo 12 crew-members Alan Bean and Dick Gordon and Apollo 13 Commander Jim Lovell, as well as NASA Flight Director Gene Kranz and Director of Flight Operations Chris Kraft.

Executive Producer Mark Stewart said: “Following a successful release in the US, we are delighted to be bringing The Last Man on the Moon home to the UK.  The reception so far from critics and public alike has been extremely gratifying and we hope that Gene Cernan’s story will inspire audiences in the UK as much as it inspired us.”

Director Mark Craig said: “I first read Gene’s Cernan’s autobiography back in 2005, and even before reaching the end I knew it was a story I had to try and bring to the screen. Many films and TV programmes had been made about space, the historical significance of mankind’s first steps on the moon, and the science and technology that it took to get us there. But never before had I been so moved by the personal journey of one man caught up in the thick of it all, burning with passion to achieve the goal – whatever the cost.”

The Last Man on the Moon is in cinemas from 8th April with a special Nationwide Live Q&A in cinemas with Captain Eugene Cernan only on 11 April hosted by Sir Jackie Stewart http://thelastmanonthemoon.com/