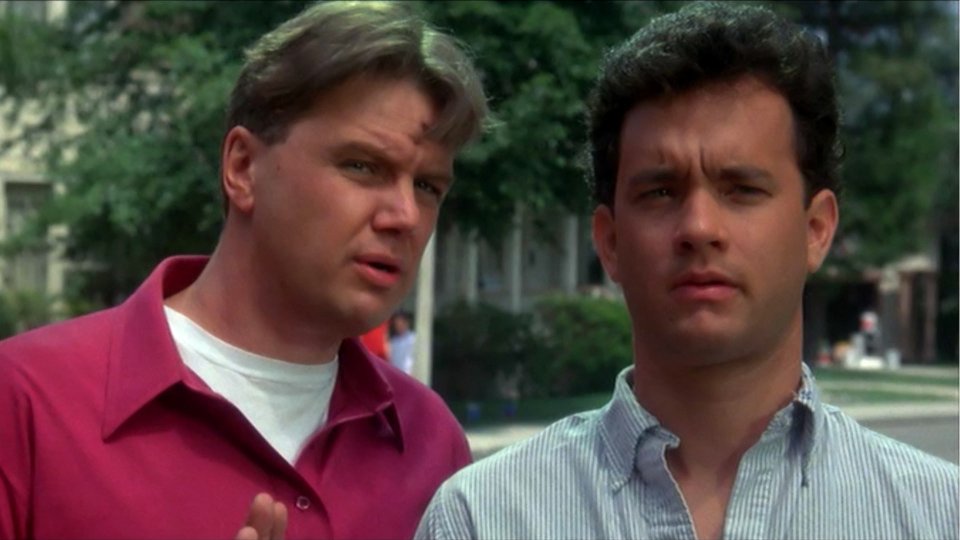 How well do you know your neighbour? Do you know them at all? Do you know what is happening behind closed doors? Is it any of your damn business? These are the questions we are given to chew over in Joe Dante’s The ‘Burbs.

At the centre of all this weirdness is Tom Hanks, as put upon family man, Ray Peterson who just wants to spend a peaceful week at home. His wife Carol (Carrie Fisher) thinks they should go away for the week and spend his vacation at the lake. Oh Ray, always listen to your wife.

Instead, he becomes obsessed with his new mysterious neighbours – The Klopeks. They live in the dilapidated house next door. You never see them during the day, and when they appear at night it is usually to do something weird, like digging holes in the garden, or violently disposing of trash. And strange sounds are coming from the basement.

Encouraged by his other neighbours, the idiot Art (Rick Ducommun) and the unhinged army veteran Rumsfield (Bruce Dern), Ray just can’t leave the Klopeks alone. Whilst The ‘Burbs is most definitely a comedy, it frequently plays with the conventions of a thriller (aided by Jerry Goldsmith’s classic-horror riffing score), ramping up the tension as they try to uncover the mystery of what this oddball family is up to.

Hanks, as ever, is superb. His relaxing vacation descending into a nightmare as each day becomes more and more filled with stress, panic and anxiety. Let’s face it – there are few things in cinema more pleasurable than watching Tom Hanks lose his temper and throw a hissy fit.

Elsewhere in the cast, Corey Feldman provides the one bum note in an otherwise strong ensemble. His token 80s stoner “dude” neighbour is pointless and unfunny. This was the last big film role prior to his career completely imploding. You can already see he is on the slide.

The film builds to an almost satisfying conclusion, complete with night vision scopes, assault rifles and enormous explosions. It doesn’t quite have the courage of its convictions however, and a final twist robs the film of whatever satirical punch it had.

In the end we are left to ask the question: who would you rather live next to – a family that keeps themselves to themselves, an ex-army gun nut, an imposing man-child with no concept of privacy, or a paranoid imbecile? I think I’ll take the family. I don’t care what they do in their basement. These suburbanites are crazy.

In this article:Carrie Fisher, Fabulous Films, The Burbs, Tom Hanks