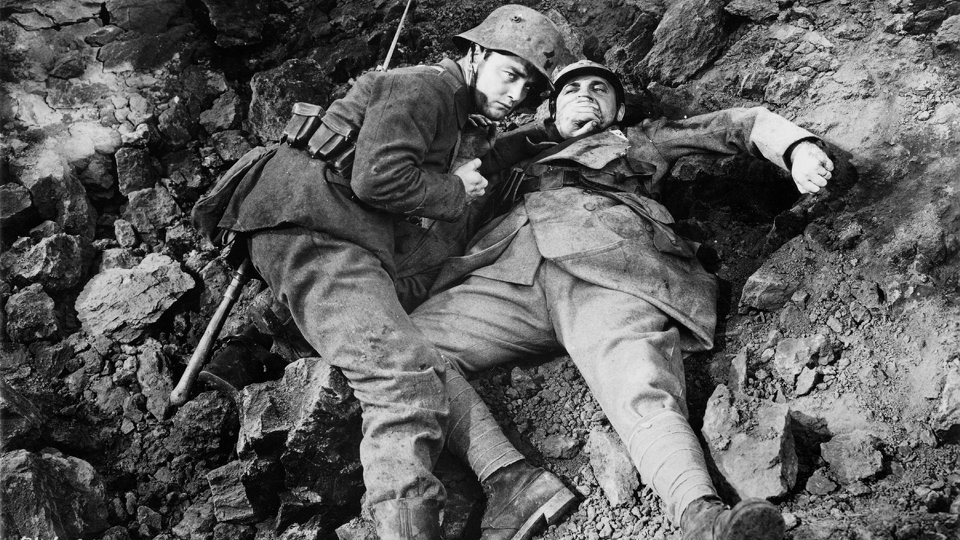 There is perhaps no greater example of classical filmmaking than the opening scenes of All Quiet on the Western Front. Set in a classroom during the early days of World War One, a teacher inspires his young students to defend the Fatherland, enlist in the army and become heroes on the front line.

The scene is not only classical in terms of style and technique, but in it’s symbolism and allusion to the classics. The Latin phrases written on the board. The references to the Romans fighting battles in a foreign land. “Dulce et decorum est pro patria mori” – sweet and fitting it is to die for the fatherland. The visual framing of the windows, designed to look like classical arches.

It is the work of a filmmaker in complete control of his art. Directed by Lewis Milestone, and adapted from the 1929 novel by Erich Maria Remarque, All Quiet on the Western Front is one of the great epic war films. We follow a group of boys from being enthusiastic, patriotic enlistees in the classroom, through their basic training and then onto the nightmare of the front line. Its harrowing depiction of the destruction of innocence set the standards for the likes of Apocalypse Now, Platoon and Saving Private Ryan.

The classical themes continue throughout the film. There is a recurring visual motif of seeing the soldiers, or the battles, framed through doorway or window arches. The addition of this proscenium to the frame reminds us that we are merely observers to these horrors.

When the carnage begins it is hard to believe that this film was made in 1930, so visceral and brutal are these scenes. Indicative of the pre-code production, we are witness to a blinding, bayonet stabbings, bludgeoning and dismembered limbs. At the sound of a shell exploding nearby, one of the young recruits even loses control of his bowels. All Quiet on the Western Front pulls no punches in its deeply realistic evocation of war.

The scene where the main character Paul (Lew Ayres) is stuck in a trench, speaking to the dead body of a French soldier who he has killed is deeply moving, and underpins the films anti-war message.

The haunting and chilling final images will stay with you long after the film has finished. An iconic masterpiece.

Advertisement. Scroll to continue reading.
In this article:All Quiet on the Western Front, Fabulous Films