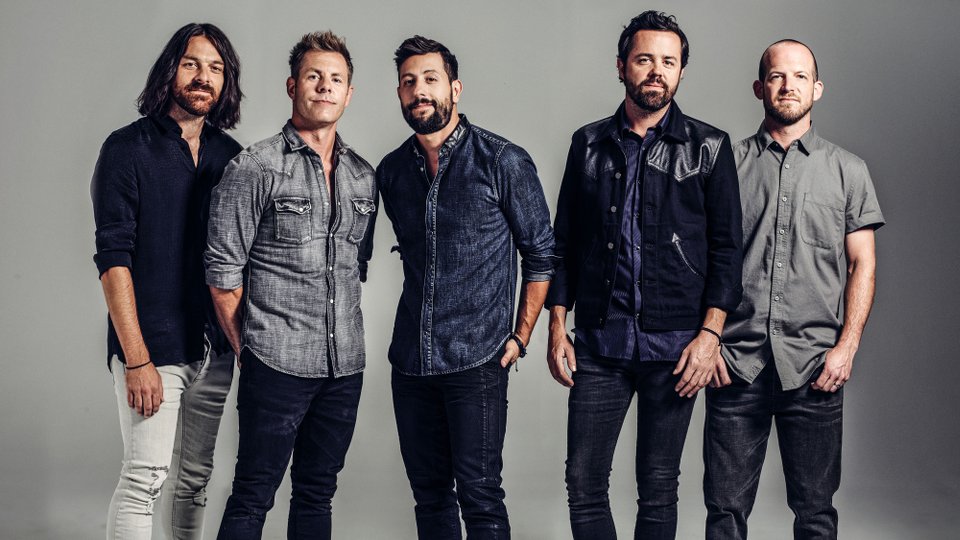 Old Dominion – Matthew Ramsey, Trevor Rosen, Whit Sellers, Geoff Sprung and Brad Tursi – released their debut album Meat and Candy in the US in 2015 and in the UK earlier this year.

This past weekend the band was in the UK to play C2C: Country to Country and it was their first time playing their music this side of the pond.

I caught up with Old Dominion to discuss their music, their expectations of the UK audience, and their connection to Nashville star Charles Esten.

Have you been to the UK before?

Brad: We’ve been here separately but never together as a band.

Before you came together as Old Dominion, you were all working as songwriters. How did the band come to be?

Matthew: Some of us grew up together and some of us went to college together. One by one we came to Nashville to write songs and play music in studios and on the road. Since we were all friends, we started playing the songs we wrote around the town for fun. It started to snowball and here we are.

Trevor: We started to have hits as songwriters too so that’s what really propelled the band.

M: We started to have hits as writers…

T: Then one day we looked up and thought this band works, we could probably take a run on this.

Your debut album is Meat and Candy. It’s varied with lots of different sounds. Was your aim with the record to showcase all of your individual influences?

Geoff : I’m not sure that was the goal as much as the by-product.

B: I think we just wanted to make it sound like something we thought sounded cool. I don’t think we were consciously trying to show our influences.

M: It just kind of happens you know. It is a by-product of our chemistry together and whatever our musical talents and limitations are, they come together and make what we do.

T: It’s just a collection of songs that we really love and how we play them. The influences are just a by-product. It’s what we sound like.

M: We do have a certain attention to detail because we’re songwriters, we definitely care what the song says and whether that be lyrically or musically. We definitely care about what each part is so that it serves the song the best it can.

Do you have a favourite song on the record or one you just love to play live?

B: I don’t know. I love them all for different reasons. On any given day a different song could be my favourite. It’s what I love about the album.

There’s been a lot of talk at C2C about the expectations of a UK crowd. What are you expecting?

B: I don’t know! We play a lot of festivals and fairs. A lot of the standard attire is cowboy boots. I walked around here and I’ve seen a lot of cowboy boots so I’m thinking it’s the same (laughs).

It’s taken a long time for Country music to take off here in the UK. Has its popularity taken you by surprise?

M: It’s an interesting thing. There’s some parts of the United States where it’s not taken off. I think it’s a different kind of music but Country music is so diverse that it only makes sense for it to spread a little bit. All the genres are kind of bleeding together and the way people listen to music now – it’s at your fingertips so it makes sense that more people are discovering it.

What does it mean to you as an emerging band to have a platform like C2C where you can get your music heard in the UK?

T: It’s amazing. It’s very important to us. We just want as many people to hear it as possible. The fact that we get to come overseas is one of those things where we’re like ‘how is this happening?’ It’s hard to believe.

Do you think we might see you again later in the year for a headline tour?

M: We’ll see how they react.

T: In the States we’re on the Kenny Chesney tour

Will the next album be a while off yet?

M: We’ll probably start recording towards the end of this year.

You played with Charles Esten from Nashville whilst you were here for C2C. How did that come about?

M: We know him. We were set up to write with him.

T: Brad and I had written a couple of songs for the show. I love him, he’s one of the funniest people I’ve ever met.

B: He’s actually sings of the songs I wrote in the show (Sideshow).

Old Dominion’s album Meat and Candy is available now. Watch the music video for Break Up With Him below:

In this article:C2C, Old Dominion