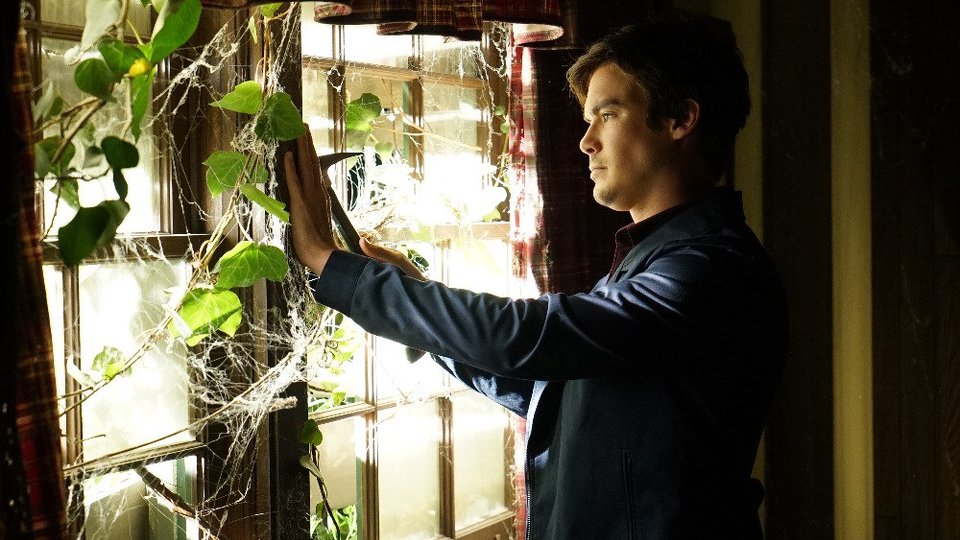 A twin was revealed and a Liar went missing on the season finale of Pretty Little Liars.

If you haven’t seen the season finale of Pretty Little Liars and want to avoid spoilers, we suggest you stop reading now. If you have seen it and want to relive all of the action then continue.

Hanna (Ashley Benson) and Caleb (Tyler Blackburn) pushed forward with their big plan this week following Hanna’s decision to text Uber A and falsely confess to killing Charlotte (Vanessa Ray). After asking for a day, Hanna went through the motions to make it seem as if she really was giving herself up and Uber A assured her that the day would be her last.

Alison (Sasha Pieterse) was back at home following her fall and resting. Elliott (Huw Collins) had to go away for week, meaning that Ali was left on her own. After falling asleep on the sofa, Ali was woken up by the sound of a music box playing. She got up to investigate and was surprised to see her dead mother Jessica (Andrea Parker) in her doorway. She dropped the music box in shock and when she looked up her mother was gone. The phone rang and Jessica’s voice was heard on the other end asking ‘did you miss me?’

Freaked out Ali called Emily (Shay Mitchell) and asked her to stay with her while Elliott was away. Emily agreed and Aria (Lucy Hale) joined them too to keep watch while Ali attempted to get some sleep. As she lay sleeping, a man’s had took hold of Ali’s and she woke to see the late Detective Wilden (Bryce Johnson) beside her. Ali’s screams alerted Aria and Emily but when they got to her room there was no one there.

Aria had to leave to join up with Caleb and Hanna, and Emily nipped out leaving Ali alone again. Once again she saw her dead mother outside of the window and Wilden in the house with her. She fled and Emily returned to find the house empty, and Ali’s phone ringing. Elliott was trying to facetime Ali and Emily assured him she would find Ali. Emily tracked Ali down to the church where she was taking shelter. Despite trying to convince her to return home, Emily ended up taking Ali to a psych ward where she voluntarily admitted herself to get some help.

The threat of Uber A may have been looming but that didn’t stop a few old flames from reigniting. Aria and Ezra (Ian Harding) grew closer once they finished their book and an emotional Ezra broke down. Later on the two were told that their book was being brought forward with a big marketing push, leading them to celebrate by sleeping together. Does this mean that Ezria is back together?

Elsewhere Hanna and Caleb had an honest conversation where Hanna told her old flame that she actually went back to find him the night they had a big fight that resulted in their break up. Unfortunately Hanna had been too late and Caleb was already gone. She admitted she had never stopped loving him and the two shared a passionate kiss!

What about Spencer (Troian Bellisario) we hear you asking? Despite telling Caleb that she loved him, Spencer spent the episode working on a plan with Toby to investigate The Radley and find out what Sara (Dre Davis) was up to. They located a secret room and during the election night events, they snook out – upsetting Yvonne (Kara Royster) in the process – and were followed by Mona (Janel Parrish). They opened up the secret room and found a file inside that confirmed Charlotte was not Jessica’s child, she was actually the child of a woman called Mary Drake, who was also a Radley patient. They then returned to the party just as Veronica (Lesley Fera) was announced as the new senator.

As we could have all predicted, Hanna and Caleb’s plan went terribly wrong. They told Uber A to meet Hanna at an abandoned motel and Caleb set up security so they could catch Uber A. He barricaded Hanna into a room so that no one could get to her, then went outside with Aria and Ezra to keep watch. After detecting someone approaching, and being blinded by lights, the trio ran back to the motel room and forced their way in. Hanna was gone and it was revealed there was a secret passage under the floor.

Spencer and Toby joined everyone at the motel with Mona in tow, and they watched the security footage that Caleb had set up. On the video they saw Jessica DiLaurentis but no clues as to where Hanna had gone.

Speaking of Jessica, it turns out that the ‘ghost’ Ali saw last week wasn’t a ghost at all. It wasn’t her mother either though. It was actually Mary Drake, Jessica’s twin sister and Charlotte’s real mother. Back the DiLaurentis house, Wilden peeled his face off to reveal Elliott (if that’s his real name) underneath, who had been working with Mary to get justice for Charlotte and gain control of the Carissimi Group. It was also revealed that Elliott had been in a relationship with Charlotte and had married Ali to get control of her shares in the group.

The episode came to an end with Hanna being dragged across the floor in the church bell tower by an unknown assailant. Our bet is that her disappearance is nothing to do with Mary or Elliott.

Pretty Little Liars returns for its seventh season in June on Freeform in the US and Netflix in the UK.