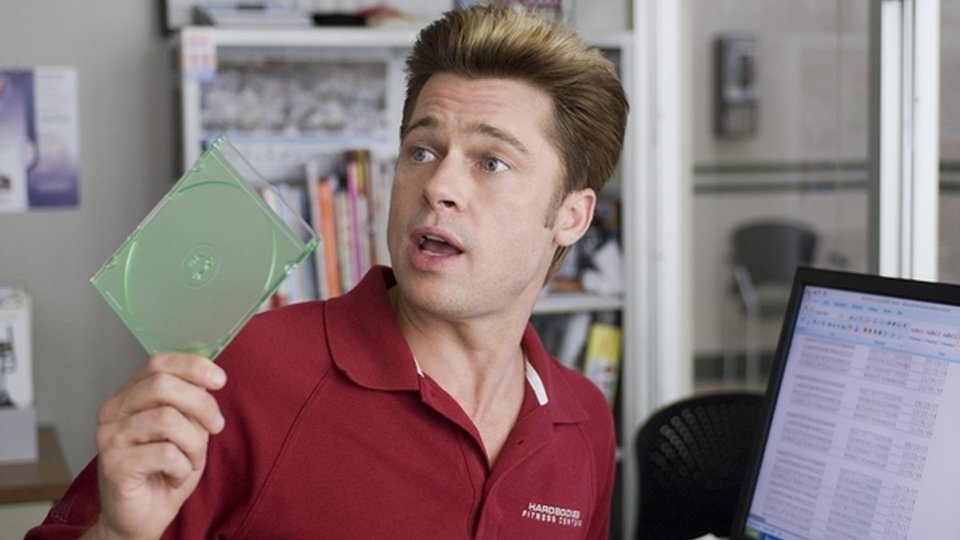 Burn after Reading is ostensibly a spy movie, but one that has been squeezed through the unique filter of the Coen Brothers. All the trappings of a spy movie are present, from the satellite imagery zooming in on us from space, to the propulsive score, and a missing disk containing sensitive information.

But this is Joel and Ethan Coen, and they aren’t really interested in any of that. This is as much of a spy movie, as it is a movie about internet dating, or gym culture, or alcoholism, or plastic surgery or sexual deviancy. Oh, and everyone is either a complete idiot or a pompous ass.

The plot is ultimately irrelevant, and almost impossible to make sense of, but here goes anyway. John Malkovich, on blistering form as bowtie wearing CIA douchebag Osborne “Ozzie” Cox, is demoted due to his alcoholism. He can’t deal with this so he quits. His wife Katie (Tilda Swinton) is having an affair with the improbably named US Marshall Harry Pfarrer (George Clooney – here completing his trilogy of American Idiots for the Coens), a man building something very strange and secretive in his basement.

When Katie learns that Ozzie has quit his job, she starts preparing to divorce him. This includes backing up everything on his computer onto a disk. A disk she loses at the gym. A disk that is found by Linda Litzke (Frances McDormand), a gym employee desperate to pay for a number of cosmetic surgeries, and Chad Feldheimer (Brad Pitt), her dim-witted co-worker. They decide to blackmail Ozzie. Meanwhile, Harry and Linda meet via an internet dating service and hit it off. After that, well, things happen.

This is screwball farce, masquerading as a thriller, and played superbly by a very game cast of Hollywood A-listers. Brad Pitt as Chad, reveals a terrific gift for comedic idiocy. His blackmail call to Ozzie, complete with feeble attempt to employ spy-craft is laugh out loud funny. Ozzie screaming at Chad down the phone for mispronouncing rapport is utterly hilarious.

If you are unfamiliar with the Coen Brothers, and you are looking for a gateway into their films, this is not it. This is most definitely not entry level Coen Bros. What it is however, is the Coens at their most Coen-esque, skewing genre conventions, confounding expectations and delivering wave after wave of idiosyncratic and irreverent dialogue. There are no stakes, none of it makes much sense, and it is all played for arch, ironic laughs. And it is brilliant as a result.

But I can understand why someone might hate it too. With a cast this starry, in the Coens’ follow up to their Oscar winning masterpiece No Country for Old Men, there might be certain expectations as to the sort of film you are going to see. Then at every turn, they gleefully subvert every single one of them.

When all the events have played out, it is all summed up by CIA Director (J.K. Simmons), in a wonderfully meta line of dialogue, as he ponders the unusual events that have occurred. “What did we learn…..I guess we learned not to do it again. Although I’m fucked if I know what we did.”