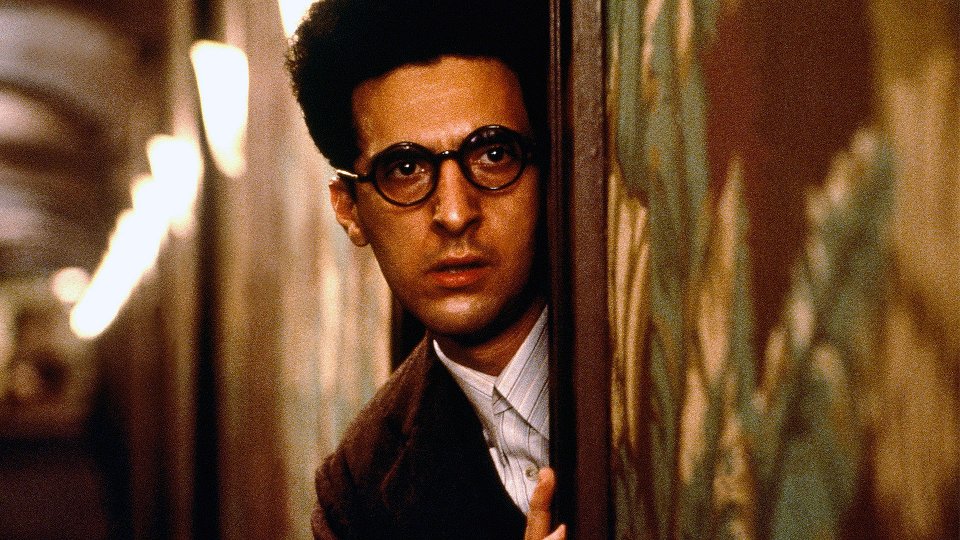 Barton Fink, the fourth film from the Coen Brothers, presents them at their most literary and philosophical. Rich in symbolism and allusion, the film is open to perhaps more interpretation than any other in their lauded back catalogue. Were it not for the few unmistakable Coen-esque trademarks, you could be forgiven for thinking that you were watching a David Lynch film.

Barton Fink, the man, played wonderfully by John Turturro is a celebrated New York playwright. A pretentious dolt who claims to be the voice of the common man, but whenever he speaks to a genuine common man he never hears a word they say. Following the success of his play, Barton is lured to the sticky, hot hell of Hollywood, where he will be paid big money to write artistically vacuous drivel. Being that he is a man only pretending to be a serious artist, he of course sells out and heads straight to Los Angeles.

The theme of high-art versus lowbrow entertainment resonates throughout the film. Writing a “wrestling picture” for a Hollywood studio is beneath Barton, but faced with the job of actually creating something for a commercial (common) audience and he is crippled with writers block. Residing in the rotting and almost empty Hotel Earle, in his grotesque room with peeling walls and noisy pipes, Barton begins a descent into a figurative and eventually literal Hell.

His only companion in the hotel is Charlie Meadows from the room next door – a boorish insurance salesman played by Coen regular John Goodman – who keeps distracting him from writing. As a common man with stories to tell, he may provide Barton with salvation. Or will it be damnation?

In need of more sophisticated conversation, Barton seeks out W.P. Mayhew (John Mahoney channeling William Faulkner), one of his literary idols who also now writes for the movies. Instead of inspiration though, he finds a drunken old man, who may not even have written most of his scripts.

In typical Coen fashion, things take an unexpected and somewhat disturbing turn, when Barton wakes up in his hotel room next to a dead body. What had started as a dark comic satire of Broadway and Hollywood has now evolved into a film-noir tinged horror.

Much of what happens in the second half of the film is open to a wide range of interpretation. Theories of what it all means range from it being a subtle treatise on slavery, or a metaphorical portrayal of the creative process, or even it being an allegory for the rise of fascism in Europe.

The joy of watching a film as beautifully composed as Barton Fink, is that they are all valid. So technically accomplished is this film, with such precise mise-en-scene, such vivid imagery and so many references to religion, literature and classic cinema, it could form the basis of any number of academic papers. You’d be wasting your time of course. The Coens refer to it as a “buddy movie for the 90s.”

It truly is an astonishing film, but a difficult one to love. The cast are all exceptional, from Turturro as Fink, all the way to Steve Buscemi as the sinister bellboy. But the main issue with film is that same burning question that goes along with any Coen Brothers film: Are they telling a joke, and am I in on it?

And that is one you have to figure out for yourselves.