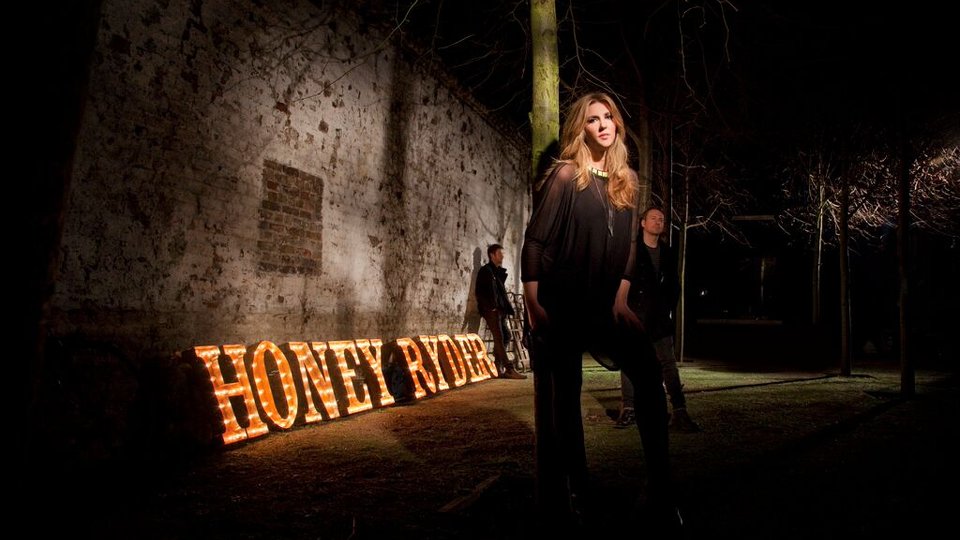 Honey Ryder have been releasing music for the past decade and released their debut album Rising Up in 2009.

Following the release of that album there was a line-up change as founding member Martyn Shone decided to leave the band for personal reasons. Vocalist Lindsay O’Mahony recruited Matt Bishop Jason Huxley turning the band into a trio.

In 2014 they released their third album Born in a Bottle followed by single Drink With Me in 2015. Next month they will performing at C2C: Country to Country at London’s O2 Arena.

We caught up with the band to talk about their upcoming fourth record, their C2C appearance, and to discuss the challenges of being a country act in the UK.

Hi guys. Thanks for taking the time to talk to us today. How are you and what have you been up to so far this week?

We’re great thank you! Really enjoying the year so far. This week we’ve been recording more material and we also had a live performance filmed at Silk Mill Studios in Newcastle, Staffordshire.

C2C is just round the corner and you guys will be performing at the festival. What is it like for you to be part of such a big event?

It’s fantastic to be part of C2C not only because it’s such a superb venue but also because the country music scene is ever expanding and it’s going to be an amazing experience having it all under one roof and over a three day period. Getting the opportunity to reach out to a wider audience is the name of the game and also getting the opportunity to meet lots of fellow musicians is a bonus.

What can your fans expect from your performance at C2C?

A lot of fun and a lot of singing – I LOVE it when the crowd sing along and I’m going to do my best to get them all involved.

Your new album Born in a Bottle is available now. What can people expect from the record that haven’t heard it yet?

Our new album is available on iTunes as we speak. It’s an upbeat record, some songs are written and recorded in Nashville, others in London. I’d say it’s essentially a pop record but with strong country, folk and rock influences.

You’ve been writing and working with some fantastic Nashville writers and producers. Who has been your favourite to work with and why?

It’s hard to pinpoint a favourite as they were all very different but equally as engaging – we wrote Hitting the High Note with Rivers Rutherford – now he’s a real character – a really witty guy with loads of anecdotes and a great way with words.

You’ve been in this industry for quite a while now. What would you say has been the biggest thing you’ve learned so far?

Probably to just be yourself under all circumstances – if you try to be something you’re not, people smell a rat! Also, the only way to combat nerves is to gig and gig and gig!

Country music is still an emerging genre in the UK. What are the biggest challenges you’ve faced in terms of getting your music heard?

I guess the challenge of getting on National Radio is the biggest hurdle – you’re up against so much competition and sometimes it can be just a question of timing, so often it’s in the lap of the Gods and the fact that you don’t have any control over the situation can be very frustrating.

You played a string of dates already this year. What is your favourite part of being on the road?

The camaraderie of being in a band, especially when you do a string of dates in one hit – you develop a sense of family amongst your band mates and it shows on stage, which is infectious and spreads into the audience…hopefully!

Which artists are on your playlists at the moment that you think we should be listening to?

There’s a great new up and coming artist called Fraser Churchill – he’s a fantastic guitarist with a great voice.

What else does 2016 hold for Honey Ryder?

Our next single In a Heartbeat will be released in April and we’re planning a headline tour around the whole of the UK later on in the year. We also want to get as many new tracks as possible for the fourth album recorded.

Honey Ryder will be performing at this year’s C2C: Country to Country, which takes place London’s O2 Arena from Friday 11th to Sunday 13th March 2016. Listen to Honey Ryder’s What If We’ve Only Got Tonight below:

In this article:C2C, Honey Ryder