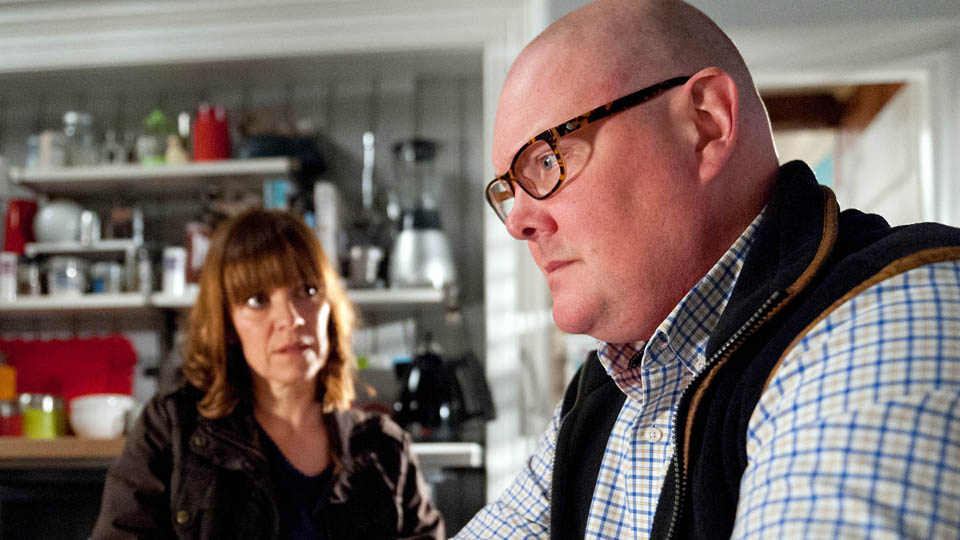 Incredibly dramatic scenes stunned viewers in last week’s Emmerdale as Kirin ran over and killed Tess, then burnt out his car in an attempt to hide the evidence.  This week we say goodbye to Kirin, as actor Adam Fielding has announced he’ll be leaving the show.

It was a well guarded storyline that surprised us all and now we wait to see this week how he leaves the show and how much help he gets from his dad.  Could it be an opportunity for the pair to make their peace?

Rhona finds out about Paddy’s affair

Paddy is in his own little world following Tess’ death and Rhona is getting suspicious as to just what is going on in his head.  She decides to look through his phone for clues to his behavior and the pieces fall into place; she realizes that Paddy was having an affair with Tess.

Paddy confesses that she is right and admits that he couldn’t be more sorry as Rhona is left completely devastated.  Next day she struggles to hold it together and snaps at Pearl who is taken aback.  As her and Paddy talk she’s heart broken to learn that it was more than just sex to Paddy.  She tells him that she won’t ever be able to forgive him, but as far as the adoption panel are concerned they are the perfect couple.

Paddy wants to stay with Marlon for a few days, but Rhona doesn’t want anyone to know that anything is wrong with their relationship for the sake of Leo and the adoption.  How long can they keep up the façade?

Lisa has a surprise for Zak

As Zak and Joanie return to the village, he feels out of the loop and has to rely on Kerry to fill him in on what she knows about Aaron.  He sets out to find out what is going on and sees Belle and Sam in the shop and is dumbfounded when Belle tells him about Aaron being abused and accuses him of not looking after him.  When Joanie sees Zak upset she asks what’s wrong but he can’t tell her because it’s family business.

Zak approaches Lisa offering to be there for his family and is buoyed when she invites him to her 60th birthday party.  Zak and Joanie are greeted with a frosty reception in the pub but Lisa insists she wants them there.  She clearly has something planned and Zak is a key part of it.

Later, Belle puts on a brave face as Lisa tells her about getting a divorce and Joanie is worried the affect it’s having on Zak.  It looks like she doesn’t need to fret as Zak confides in her about Aaron and tells her she is all the family he needs.

Jai and Nikhil fight over Leyla

After the fake, virus-induced proposal from Leyla to Nikhil, it seems that both are having insecurities this week and a call from Canada about his job leaves Nikhil thoughtful.  Soon what started as a joke looks like becoming a reality.

David returns from Portugal and is surprised to hear that Leyla and Nikhil are getting married for real.  With a luke warm response from him and Jacob, will Leyla and Nikhil (Lekhil?  Nikla?) be in a rush to tell the Sharma clan?

In the Woolpack everyone is astonished when Jai returns and reveals he has been in rehab.  Leyla is confused when she shares a highly charged moment with him.  He seems like a changed man and knows he has a long way to go to win back his family’s trust.

Nikhil doesn’t trust Jai not to make a move on Leyla when he heads back to Canada for work and the tension builds into a fist fight between the brothers.  Isn’t that every girl’s dream to be fought over?  Meanwhile, David senses that Leyla may still have feelings for Jai but what does she say when he questions her?

Ashley worries when he finds half a bottle of alcohol under the sofa.  He confronts Laurel who is gobsmacked he would accuse her.  He later discovers it’s Gabby’s and feels terrible.  Perhaps a wedding might cheer things up?

Chas is trying her best to get anything that will help build the case against Gordon.  She gets an idea when she overhears Adam telling Victoria how good Robert is with the business and asks Robert for a very big favour.

Adam deletes photos of Johnny from his phone in an attempt to put him out of his life for good.