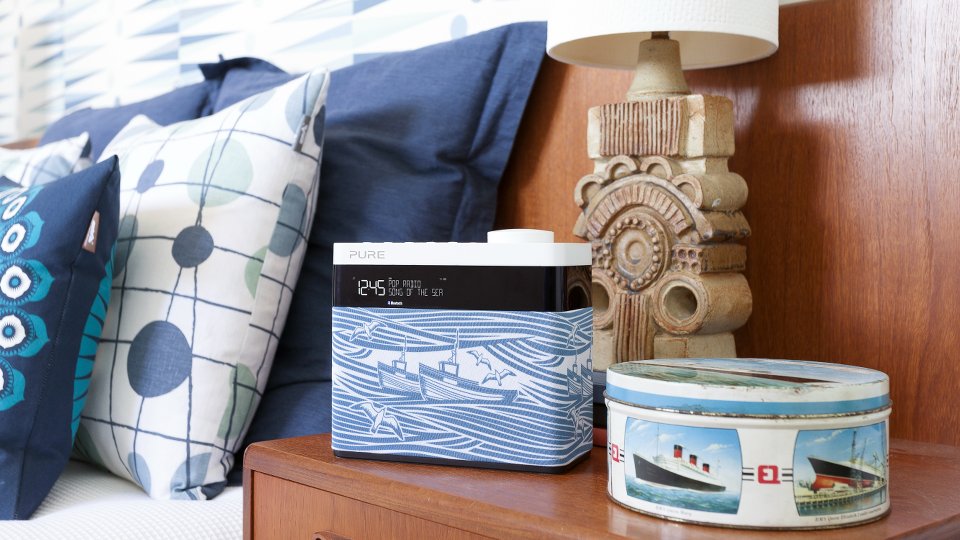 Pure has had a lot of success with its Pop Maxi and Pop Midi range. The portable digital radios have picked up awards and last summer they got a designer edition release sporting a nautical theme known as ‘Whitby’ by Mini Moderns. The designers, Keith Stephenson and Mark Hampshire, were responsible for the eye-catching design and it’s fair to say it makes the radios stand out much more than they did previously.

Aside from that design there’s nothing else new about the Pop Maxi digital radio. Like the original design it features a clear display with scrolling text highlighting track titles, programme info and station details. The radio arrives with 20 presets, 10 DAB and 10 FM, and it’s really easy to scroll through them using the buttons on the top. To turn the radio on you press the big white button on the top right and once it pops up, it also doubles as volume control, which is a really nice bit of design.

For a small product, the Pop Maxi does a fair bit boasting kitchen and sleep timers, and a radio alarm. There’s a stereo headphone socket at the back so you can plug your headphones in rather than share your music with everyone, and you can connect an iPod or MP3 player via the aux-in socket. The radio also boasts Bluetooth connectivity so you can wirelessly stream your devices through the radio’s speaker.

Speaking of the Bluetooth feature, it’s really simple to pair the radio to you device. Using an iPhone you go to Settings then Bluetooth, which will give you the option to pair it. For me it worked quickly and without any issues. I was really impressed with the ease of use and felt it was straightforward enough for a person of any age to quickly get to grips with.

So far, I was impressed but that soon changed when I paid close attention to the sound quality coming from the speaker. Small speakers always face a challenge when it comes to producing room-filling or warm audio. The Pop Maxi sounded really tinny with a lack of clarity produced for the music coming out of it. I scrolled through several stations and found them all to be the same. A quick play with the bass and treble settings provided little difference either.

The sound quality is about passable for a digital radio but the Bluetooth audio sounded particularly poor. I streamed a variety of songs from Zayn Malik’s atmospheric R&B track Pillowtalk through to the more acoustic stylings of Jewel’s recent album Picking Up the Pieces. Unfortunately the audio sounded muddy and distorted for all and I was really disappointed. I’ve heard far better audio come from smaller devices at a much cheaper price.

The Pop Maxi can be used as a portable device should you choose to purchase the additional ChargePAK D1 rechargeable battery pack. That’ll set you back around £35, which isn’t particular cheap. The pack charges inside the Pop Maxi if it’s connected to the mains and gives around 18 hours of portable listening, which is fairly impressive.
Overall I was pretty disappointed with the Pure Pop Maxi with Mini Moderns. Despite it’s stunning design, which to be honest is likely to be a big factor in people deciding to purchase it, the Pure Pop Maxi just doesn’t offer a good enough sound quality for me. As someone who likes to hear depth in their music, I was disappointed with the output of this device. If you want something to use in a small space such as a kitchen or a study, then the Pure Pop Maxi would be sufficient but if you want better quality audio and more flexibility with your device then I would suggest looking elsewhere.