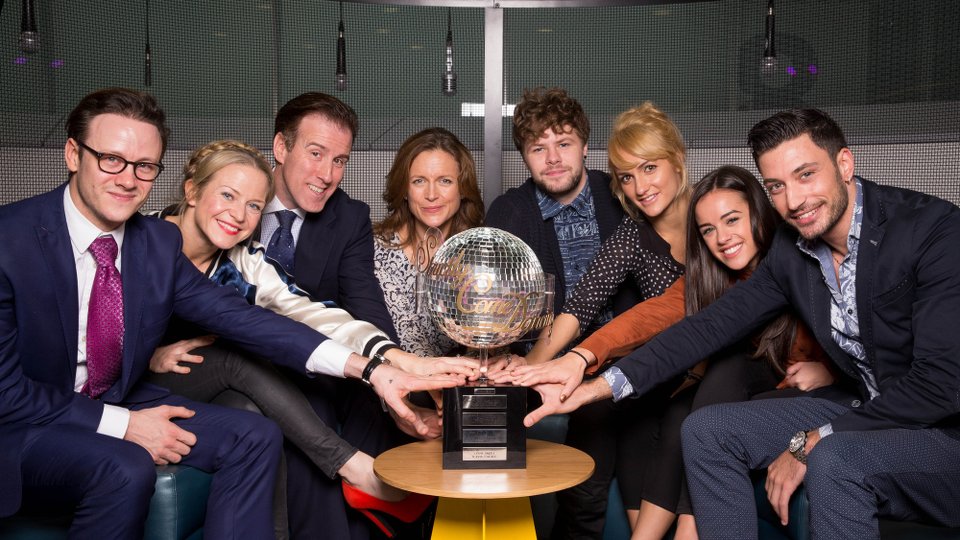 Can you believe it’s the Strictly Come Dancing 2015 final tonight? I can’t either!

The weeks have flown by since Strictly returned to our screens in the autumn and 15 celebrities have become 4 for the final showdown. Georgia May Foote, Kellie Bright, Jay McGuiness and Katie Derham have all made it through to the final after Anita Rani was eliminated by the judges last weekend.

Tonight the four remaining couples fought to stay in the competition and make it through to the final 3, who will then go on to compete again in the second live show of the evening. The competition really is anyone’s to win and it’s so close I couldn’t even begin to try and call it.

Tess Daly and Claudia Winkleman were on hand to keep an eye on proceedings whilst judges Craig Revel-Horwood, Darcey Bussell, Len Goodman and Bruno Tonioli offered their usual mix of critique and praise. Tonight’s show opened with a group dance featuring all of this year’s celebs and pros.

Keep reading to find out how everyone got on tonight…

Singer Jay McGuiness was the first to dance tonight. The first round was the judges’ choice and Jay was given the Quickstep. Over the course of the series it’s one of the dances that stuck out as being difficult for him. During his intro VT he admitted that he was going to do everything he could to try and impress the judges tonight. Did he do enough?

The dance: That looked like an improvement to me. Jay seems to be leading the pack in terms of odds on to win. It’s a good start for him tonight despite a mistake.

The comments: Len said that Jay made a couple of little mistakes but admitted it was a vast improvement over the first time he did it. Bruno said that Aliona made a mistake rather than Jay but told Jay that the stumble ruined the whole effect of the dance. Craig commented on Jay’s thumbs saying he was pleased to see they were down and told him it was a joy to watch. Darcey said that Jay’s performance was divine and told him he led Aliona beautifully.

Georgia May Foote and her partner Giovanni Pernice are the couple that I would like to win tonight but I think they’re going to be up against stiff competition. The judges told Georgia that they wanted her to do the Rumba with Len advising that she needed to put more basic Rumba content into the routine. Georgia was pleased with the judges’ pick but admitted that it was a difficult routine to get right. Did Georgia change the judges’ opinions tonight?

The dance: I loved that routine the first time and it was even better tonight. Georgia has come on so much over the course of the competition and she deserves to get through to the second live show tonight.

The comments: Bruno said that he was ‘totally smitten by the sex kitten’ and told Georgia that there was a little issue with balance. Craig said that he got the hip action that he wanted and commended the intensity of the routine. Darcey said that Georgia delivered great control and told her it was ‘beautiful’. Len said that it was lovely and he commended the addition of the extra content.

Kellie Bright was revisiting her first dance tonight after the judges gave her the Tango. The first time round they got 27 points and Kellie admitted that she wanted to do the dance again. Of all the dances for the judges to pick this was a great choice for Kellie and Kevin. Did they beat their previous score?

The dance: That was a much more confident performance from Kellie tonight. She’s been the most consistent dancer this series and I wish the public would get behind her more.

The comments: Craig said that Kellie’s hard work has paid off and told her it was sharp and clean. Darcey said that the difference in Kellie’s top line was ‘yummy’ and commended the amount of attack that she gave. Len said he saw more than just a bit of fire and told Kellie that she ironed out all the kinks. Bruno said that Kellie never ceases to surprise him and told her she did exactly what a Tango should be.

Katie Derham is the underdog tonight and the judges picked the Quickstep for her to perform again tonight. The first time she did the routine, Katie couldn’t keep up with the pace. Katie admitted that she would have to work hard to get it right and she said she was glad to have the chance to perform it again. Did Katie make her mark in the first round?

The dance: Aside from that unfortunate hat malfunction Katie did a good job with that routine. She kept up with Anton better than the first time she attempted it.

The comments: Darcey said that Katie never fails to be a beautiful and classy lady. Len said that Katie kept up most of the time and told her it was ‘fast, full-on and flat out’. Bruno said that the suspensions tonight were better but told Katie she always hits a few bumps. Craig reeled off a list of criticisms but told Katie it was a major improvement.

The leaderboard after round 1 was:

Time for the showdances! Jay was the first back on the floor for round 2 and he admitted that he wanted his showdance to be the best that he’s done. Did he pull off something spectacular?

The dance: That was danced beautifully but it didn’t pack the wow factor that I’d expect from a showdance. I’m going to say that was a bit disappointing.

The comments: Len said it was like a trip down memory lane and told them he would have liked a bit more ‘show’ in the showdance. Bruno said that he expected an extravaganza but told Jay he got a pick’n’mix of Ballroom and Latin instead. Craig said that he was disappointed and told Jay that his showdance was a copout. Darcey said that she had high expectations of Jay and told him they wanted a surprise.

In her intro VT Georgia admitted that she was throwing everything into her showdance and that there was one part that could go terribly wrong. During training Georgia broke down as Giovanni told her how great a dancer she had become. Did Georgia wow?

The dance: That was absolutely beautiful. It was much more special than Jay’s showdance and very daring of Georgia. I hope that takes her through to the next live show.

During training Kellie thanks Kevin for making her laugh and for everything he’s taught her over the course of the series. Kellie said that the showdance was going to be all out and that she would go for it tonight. Did she make the most of her moment?

The dance: Kellie threw all of her energy into that one. I don’t know how she does it. It was fast and furious and a whole lot of fun.

The comments: Craig said ‘OMG’ and ‘Ah-maze-ing’. Darcey said the dance was ‘extraordinary’ and told Kellie she was a cheeky star. Len said that Kellie performed a proper showdance. Bruno said that Kellie brought her A game at the right time.

Katie had a lot to prove with her showdance tonight as she is the weakest dancer in the competition. I still feel sore about her victory over Anita last week. Could Anton help her pull off a spectacular Showdance?

The dance: Well Katie threw everything she could at that. It was dramatic and full of content but Katie didn’t always look confident. That fall at the end looked like it might have gone horribly wrong.

The leaderboard for the second round was:

Strictly Come Dancing 2015’s final continues at 9pm. Take a look at the couples in dress rehearsal earlier today in our gallery below: