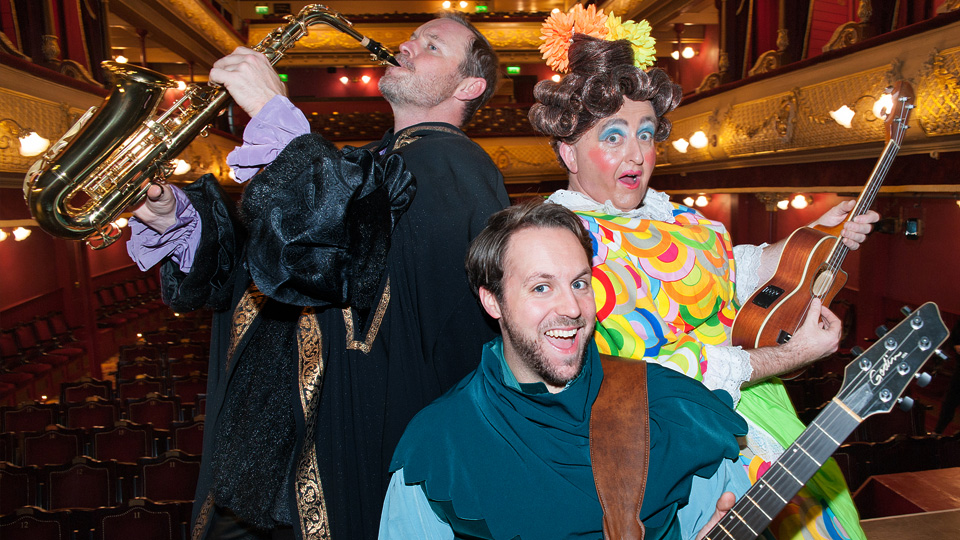 Nanny Nellie Nightnurse, Robin Hood and the dastardly Sheriff of Nottingham took time out of rehearsals at the City Varieties in Leeds to pose for a quick pic ahead of the opening of Robin Hood the Rock ‘n’ Roll Panto at the end of the month.

“The City Varieties Rock ‘n’ Roll pantomime has become a necessary-date-in-the-diary throughout the festive period,” says Ian Sime, General Manager at City Varieties. “It’s fair to say it’s a bit of a Leeds tradition – the fact that we welcome people back year on year is wonderful.”

The soundtrack is played live on stage by the cast and is crammed with covers of big hit songs; this year’s treats include Fleetwood Mac, Bruce Springsteen, The Clash, Meatloaf and Bob Marley.

“The cast are extraordinarily talented,” Ian continues. “The atmosphere is electric and has audiences, young and old, dancing in the aisles; the feedback we receive from audiences is fabulous.”

The Rock ‘n’ Roll Panto has everything audiences expect from a traditional family pantomime – slapstick comedy, audience interaction and outlandish costumes – with the bonus of a rocking soundtrack and the now-legendary ‘boulder fight’- if you’ve been before you’ll know exactly what the ‘boulder fight’ is; if you haven’t then there’s only one way to find out. In the words of Ian Sime: “You won’t see anything like this anywhere else in Yorkshire. It’s a real treat.”