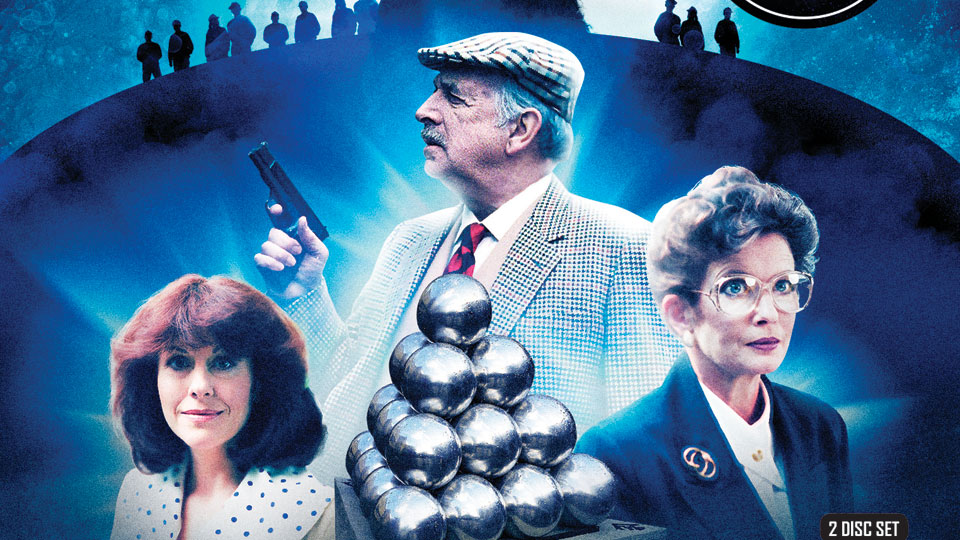 It’s hard to imagine now, in an age when Doctor Who is the BBC’s vigorously-milked golden cow, that the 1990s were a doldrums period when nobody but the die-hard fans remotely cared about the show. Back in 1995, the BBC allowed a straight-to-video spin-off drama to be made that brought together a host of characters from the series’ history – but no Doctor and no TARDIS.

Downtime came about to feed hungry Doctor Who fans, starved for six years since the series was axed, with new material. The hugely-ambitious production had a lot of talent involved, from director Christopher Barry, who was behind the camera for the very first Dalek story and the revered Pertwee classic The Daemons, to Nicholas Courtney in the lead role, reprising his ever-popular part of Brigadier Lethbridge-Stewart.

Downtime is an unofficial sequel to the Second Doctor stories The Abominable Snowmen and The Web of Fear, both of which featured the Yeti as the monster and established the character of Professor Travers, played by Jack Watling (who in Downtime looks rather like his aged-up version of Travers from The Web of Fear). The story sees Victoria Waterfield (Deborah Watling – Jack’s real-life daughter) running New World University, where students are secretly brainwashed by the Great Intelligence, which is plotting once again to take over the world. When Sarah Jane Smith (Elisabeth Sladen) and Nicholas Courtney (Lethbridge-Stewart) become embroiled, they realise that the radical university is really a cover for something an awful lot more sinister than a new method of educating young people.

This DVD, which features not only the original production but a second disc with a host of extras, will appeal to Doctor Who fans young and old. There’s a poignant joy in seeing Elisabeth Sladen and Nicholas Courtney, who would both sadly die in early 2011, together on screen again after so many years, and they effortlessly slip back into their respective parts. Sladen is as effervescent as she always was, whilst Courtney retains the dignity and gravitas that made the Brigadier so loveable, and he has an undeniable screen presence. Veteran actor Jack Watling makes an impact too as the elusive Professor Travers. It’s also great to see Doctor Who stalwarts Geoffrey Beevers (an incarnation of the Master) and John Leeson (the voice of K9) bring some light comic relief to their parts of a down and out and a disc jockey with delusions of grandeur respectively.

Sadly the rest of the cast do not live up to the top-billed actors. The first scene sees James Bree deliver another in a long line of eccentric and faintly ludicrous performances, which sets the whole production off on the wrong foot. Any villainy and menace that is built up by the unseen Great Intelligence is fatally undermined by an awful, amateurish turn by Peter Silverleaf as Deborah Watling’s sidekick that has to be seen to be believed. There’s also something distinctly unthreatening about students in bright yellow baseball caps. They come across more as bewildered religious cultists than a serious threat to humanity.

A few poor performances aren’t Downtime’s only problems.  Marc Platt’s script is unfocussed and unconvincing, which is a shame since his Doctor Who story Ghost Light is a masterpiece in tightly-woven intricate plotting. We’re asked to buy into the coincidence that New World University, hiding a nefarious agenda, would employ a journalist and outsider like Sarah Jane Smith to investigate the Brigadier – surely there must have been a more convincing way to reunite the two? A sub-plot involving astral planes, which feels completely out of place, is perhaps a marker buoy for the pseudo-scientific gibberish that sadly saturates the remake, a show no longer bothers at all with any scientific content.

There is a train of thought that Doctor Who lost something when it went to colour. It’s certainly true that moodiness is far better captured in black and white, where shadows may be exploited. Film noir relies on this technique. The Yeti monsters, fairly compelling on small, flickering black and white 1960s television sets, could easily convince, with the imagination filling in the blanks. Colour videotape, on which Downtime is shot, is very unforgiving, and almost impossible to build atmosphere with. Thus the Yeti aren’t as terrifying as they were nearly thirty years earlier, and Christopher Barry tries but ultimately fails to deliver a slice of low-budget but satisfying science-fiction.

Downtime was certainly made with very good intentions, and it has its charms. It strives for greatness but really only mimics. The introductory music is more than a nod to Jerry Goldsmith’s incredible score for The Omen (a tribute to Patrick Troughton?) but is a homoeopathy version, where originality might have served it better. The cheapness of the production is perhaps fitting, given that Doctor Who itself was known for creating magic on a shoestring budget, and looked incredibly cheap in the late 1970s. But it’s not the low budget and dated effects that work against Downtime: it’s a weak script that even a budget ten times the size wouldn’t have overcome. Disappointment is perhaps the Doctor Who fan’s lot: and Downtime, whilst an interesting curiosity with a huge nostalgia draw, doesn’t stand on its own merits.

The production itself earns two stars, whilst a further star is awarded for the extra features disc, which will certainly intrigue collectors. Behind the Lens, the biggest extra, is a behind-the-scenes look at the making of Downtime containing never-before-seen footage.