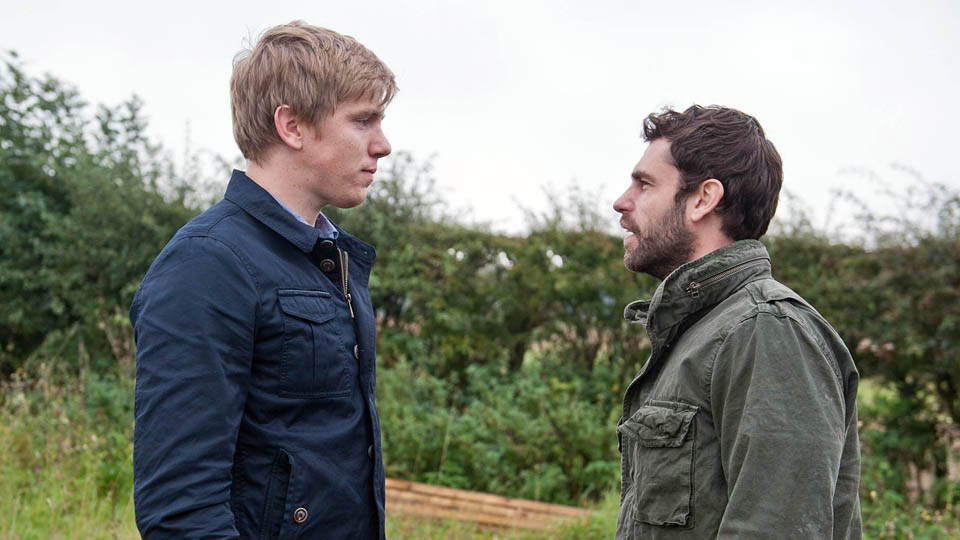 Welcome to our look ahead to what you can expect in Emmerdale this week.

As Aaron’s day in court arrives, he locks eyes with Robert when he says ‘Not Guilty’, but he’s not granted bail and as Robert goads him to tell the truth, Aaron tells him he should’ve stayed dead and done everyone a favour.

Andy is struggling with the thought of Aaron being banged up for something he didn’t do and grabs a bottle of vodka before heading to the graveyard.  Later, Ashley finds an inebriated Andy at Katie’s grave and thinking he is grieving, offers him counsel and is stunned as Andy tells him that Aaron is innocent.

The next day, Ashley confronts Andy wanting to know what he meant and Andy begs him to forget the conversation for the sake of his kids, leaving Ashley with a moral dilemma.  He confides in Laurel who encourages him to do the right thing.  He phones Andy and leaves a voicemail asking him to go to the police, except he’s accidentally dialed Robert’s phone by mistake.

An anxious Robert arranges to meet Andy and after a heated exchange, Andy finally makes an admission about the shooting.  Robert is determined to call the police, but the phone is knocked from his hand and the pair take off on a car chase which ends in a deadly face off.  As they both rev their engines it seems both are determined to pile headlong in to each other, but at the last minute it’s Robert that swerves.  Even though they have avoided a head on collision both cars veer off the road and crash.  Which of the brothers will walk away with their lives?

Nicola is back and Jimmy has some explaining to do!

Jimmy is in a spin when he learns that his wife, Nicola is returning two weeks earlier than expected and she doesn’t yet know that they have moved house and they don’t have any furniture in their new place bar a TV.

As he tries to get some furniture together, Nicola arrives and is confused when her keys don’t work in their old home.  She storms to The Woolpack where Jimmy has to explain what’s been going on.  Nicola being Nicola is soon taking matters into her own hands and breaks in to her old home and starts a protest which includes throwing Priya’s shoes out of the window.

Jimmy knows it’s going to take something monumental to win her over and as he recalls his Top Gun performance he spies a watermelon.  Just what movie moment is he going to attempt to recreate this time?

Jai stirs up trouble for Nikhil

Nikhil’s partner Tanya arrives in the village, but their reunion is interrupted by Jai and Brenda who mentions getting together to celebrate what would’ve been Gennie’s birthday.  Jai is insistent that Tanya should attend, secretly hoping that everyone else will hate her for being insensitive.

He plays the annoying big brother role to a tee as he sets about winding up Nikhil, knowing exactly which buttons to press.  Will he succeed in trying to push Nikhil to going back to Canada?

It seems that either way, Nikhil has some news that Jai is going to want to hear.  As he visits Gennie’s grave, he spies Megan at Robbie’s grave and as she turns to leave she drops her baby scan photo and he realises she’s still pregnant.  He tells her that Jai and the family have a right to know.  Megan is horrified and needs to leave the village urgently.

Bernice asks Lawrence about his sexuality only for him to evade the question.  Later, he turns to Edna for advice.

Why does Zack get all wound up when Rodney makes an inappropriate comment about Joanie?

Chas is convinced that Emma is stalking her but tries to hide how scared she is in front of Cain.

Rhona gets broody, but still guilty over his one night stand, Paddy tries to put her off.