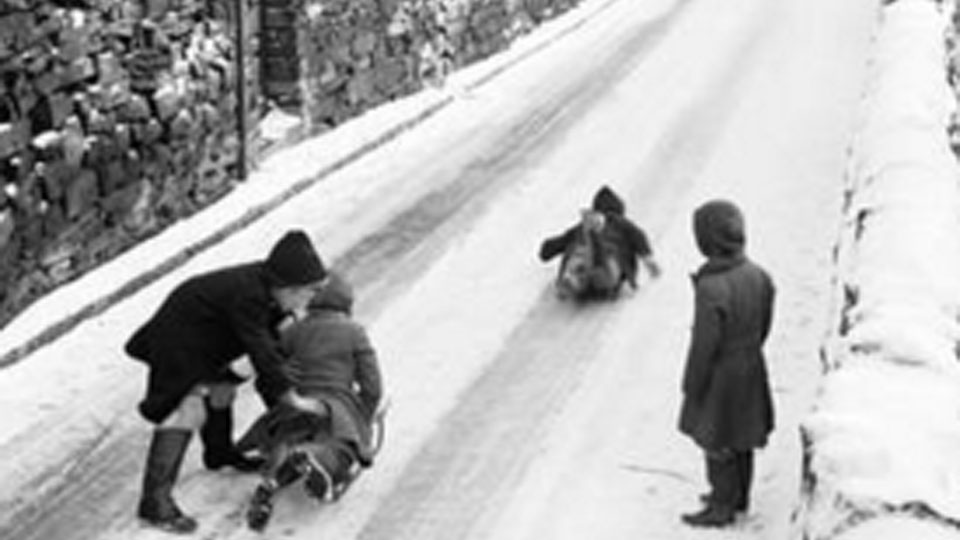 Village Christmas and Other Notes on the English Year brings together a collection of Laurie Lee’s autobiographical writings that relate to the four seasons. The major selling point, especially with winter fast approaching, will be the early sections on Christmas. The evocative black and white image of children playing in snow on the front cover, and the deep red colour of the hardback beneath the dust jacket make the relatively slim volume an excellent choice for a Christmas present and Yuletide read. However the essays develop into spring and summer, and round out with autumn.

Another major draw for readers will be discovering new writing from Laurie (who died in 1997), since seven of the pieces in this volume are previously unseen in a major publication, having been recently rediscovered by the author’s daughter, Jessy Lee.

Village Christmas, like a lot of Lee’s writing, is evocative of the area he was living in, and there’s a good contrast between the natural beauty of the Cotswolds, the countryside he grew up in and later retired to, and the vibrancy of Chelsea in the post-war era. Some of the pieces are travel guides or love letters to the parts of England Lee made his home, though he often colours them with fascinating historical insight (see Lords of Berkeley Castle). The collection will be adored by those who love the countryside and its wildlife, especially those still lucky enough to see great flocks of starlings, which he recalls in Letter from Britain.

For fans of the Yuletide period, Village Christmas, A Cold Christmas Walk in the Country and My Country Childhood will bring warming festive cheer. Deeply nostalgic, evocative of childhood, and an insight into traditions now long gone, they are beautiful memories of the meaning of Christmas, especially amongst the young.

The area of Slad, where Lee spent much of his life, comes into sharp focus with The Fight to Save Slad, a piece written during Lee’s old age, when the beloved countryside of his birth was being given over to developers to forever change a landscape that had been unchanged for generations. It’s a piece full of pathos, and it rightly rounds out the section on winter. It’s a much more sympathetic piece than On Craftsmen, which is a touch patronising and brings out the Luddite tendencies in Lee. Certainly hand-crafted goods are better than mass-produced – who would disagree? – but machinery has given humans more leisure time for intellectual pursuits – such as writing.

Chelsea Bun is a striking piece from the Spring section – with a few names delicately dropped such as fellow scribes Dylan Thomas (“padding off to the pub”) and TS Eliot. His love of the English pub is brought out in The Queen’s Elm, one of the longer pieces which will be enjoyed and invariably agreed upon by real public house enthusiasts.

The language is poetic, and occasionally very funny (on the decline of quality eating houses in Chelsea, Lee remarks that “the whole place began to fall to pizzas”), and the most amusing anecdote, of a school girl asking him if he knows where Laurie Lee is buried, is so good it’s included in this collection twice. His response is even wittier. His long-overdue and slightly silly act of rebellion on returning to his old school – as a celebrated writer many years later – will also raise a chuckle in Return to Stroud Secondary Modern School.

A lot of the England that Lee describes is now gone, and had probably gone before his death, aged 82, in 1997. But his power of recall is compelling, his grounding in local history thorough and fascinating, and his turn of phrase powerful enough to produce shivers (“…the ghosts of those old hymns sing through us still…”).

Village Christmas is a beautiful book, not just in terms of the quality of the writing (which Lee knew himself – there’s a wonderfully barbed negative comparison of Jeffrey Archer’s prose style), but also in the presentation, printed on high quality paper and bound in hardback with dust jacket. The only criticisms of the book are that it would have been beneficial to know which year each piece was written or published, and that sometimes the reason for their grouping into a particular season seem a touch tenuous. Nevertheless, Village Christmas is a great read and a very attractive book.