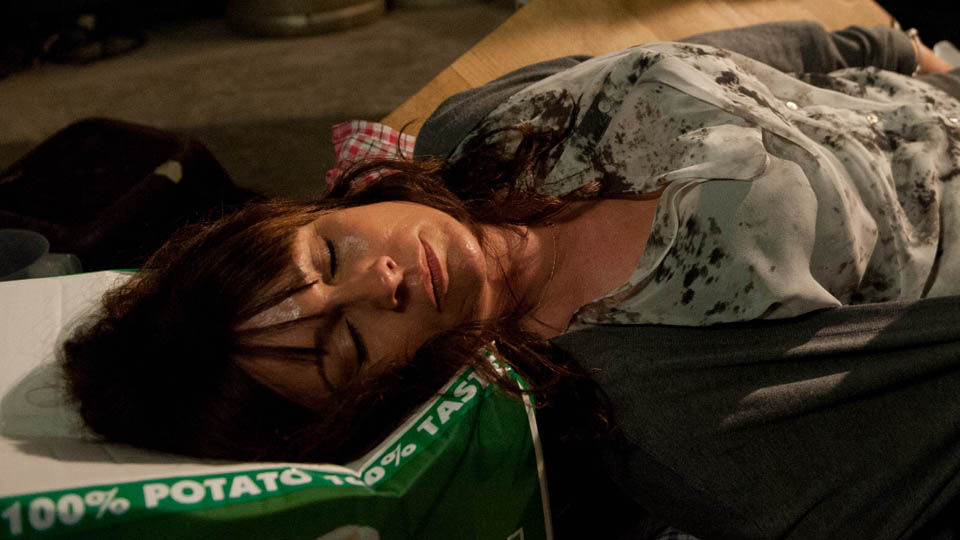 Welcome to our regular look at what’s coming up in Emmerdale this week.

Chas Dingle’s life is in danger

Chas is still convinced that someone is after her, probably the person who really shot Robert.  When she finds a disconnected pipe from a barrel she panics someone has broken in, getting even more worked up when she hears bangs outside the pub.  It’s up to Emma to step in and calm Chas down, explaining she may be suffering from panic attacks since the shooting.  James beams with pride at how a usually jealous Emma has helped Chas out.  Emma’s glee is short-lived when later on she realises James has gone back to check up on Chas.

Later, Chas awakens to find the cellar has been left open in the night and again worries that she’s being stalked and this is a warning.  Emma steps up again to help, this time behind the bar but is more of a hindrance than a help.  When Chas goes to the cellar to correct one of Emma’s mistakes, Emma accidentally locks her in and her cries for help go unheard over the fireworks outside.  Chas tries to escape the cellar in a rush but slips and is left unconscious with nothing but a leaking gas canister for company.  As more fireworks light up the night sky, Chas life is in danger.

When folk learn that it was Emma that locked Chas in the cellar, she becomes the number one suspect, but has she really been terrorizing Chas?

Megan worries that Jai may have figured out she’s pregnant after he grabbed her in the graveyard, what she doesn’t realise is that Jai is still lying where she left him.  David and Leyla happen upon his body and fear the worst.  When Megan learns that he’s in A&E, she feels responsible for leaving him to die.  When she gets word that he is going to be alright, she vows to leave the village before he has time to work out that she’s still carrying his child.

At the hospital, Nikhil turns up after hearing the news about Jai from David, much to the surprise of Priya, who’s shock turns to fury when he tells her that Rishi wants him to run the factory.  Things get worse when later in the week, she walks in on Rishi updating Nikhil on factory business.  Jai is also unhappy to see his brother back and taking over.

When Debbie learns that Nikhil is back in the village she tries to apologise to him about Gennie only for it to backfire.  As Ross arrives and hears Nikhil letting rip into Debbie, he lands a punch on Nikhil’s face.

Paddy’s one night stand comes back to haunt him

When Rhona loses her engagement ring, Paddy feels guilty, so later on, he pretends to have found it, gets down on one knee and gives her a new one.  Rhona is overjoyed!  Soon after, in the Woolpack, Paddy feels the guilt closing in on him as Rhona tells everyone about his romantic gesture.

Meanwhile, Carly is feeling bad about teasing Marlon for getting the wrong number from Chloe, the woman he met at singles night and decides to do something about it, unaware that it could backfire on Paddy.  As Marlon prepares to go on a date with Chloe, Paddy tells him he needs a favour.

Rhona asks Paddy to help with Leo’s new teaching assistant and he is gobsmacked when he finds out it’s actually Tess, Chloe’s best mate that he slept with on the night of Robert’s shooting.  When the gang head out to watch the fireworks and Marlon recognises Tess, Rhona wonders why Paddy didn’t mention that he knew her.  That night Rhona suggests an early night to Paddy and is surprised how passionate he is.  Is it fuelled by guilt or by Tess?

Vanessa is nervously hopefully as she attempts to breastfeed baby Johnny for the first time.

Victoria offers to look after Robert at her place when he leaves hospital, but Andy refuses to live under the same roof and makes a big admission.

Bernice is still not happy with the sleeping arrangements for her and Lawrence.

David and Leyla are worried when they see Tracy charm cash out of Eric.

Belle defies Lisa’s wishes and heads out to see Lachlan.