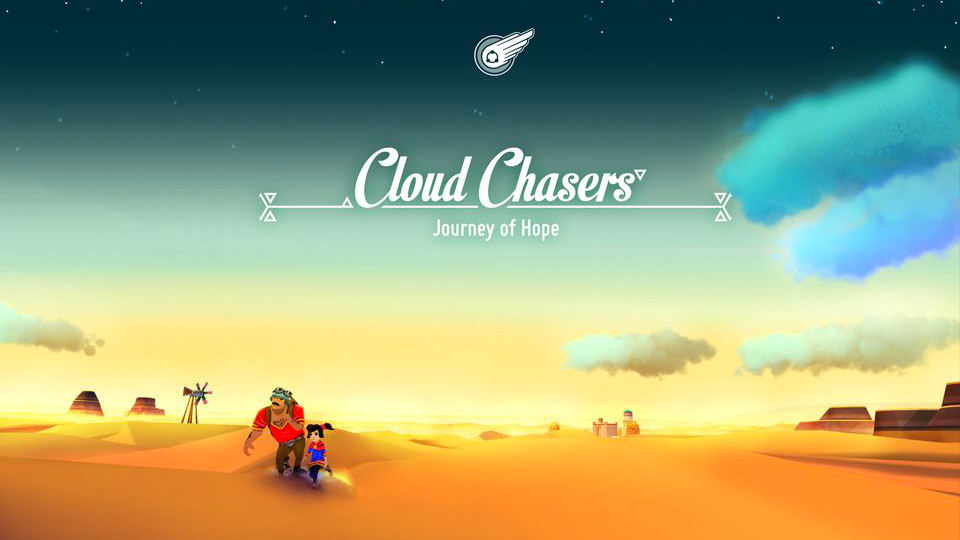 Hunger, Climate Change, War, Persecution: The list of reasons why people flee their homes goes on and on. Millions worldwide are on the move, experiencing extreme hardships in their search for a better life, not knowing whether they will reach their destination. The new mobile game, Cloud Chasers, from Zurich-based indie game developer Blindflug Studios lets players guide farmer Francisco and his daughter Amelia through five perilous deserts, experiencing the arduous and dangerous journey of migrants worldwide.

The game’s main characters, Francisco and his daughter Amelia have to flee their home because a lack of water has completely dried out their lands and robbed them of their livelihoods. Meanwhile a privileged few are living on artificial floating islands in the sky. Water is the main resource in the game, players can harvest it, by guiding Amelia through the clouds on her glider – becoming Cloud Chasers. But the clouds are a dangerous place, and Amelia has to compete with the elite’s powerful machines and drones. Francisco and Amelia have to make their way through five deserts – each becoming longer and tougher to pass than the last one – to reach the spire to the promised land.

Throughout their journey, the two encounter kindness and assistance but also hostility and animosity from strangers. Every encounter requires players to make meaningful decisions: Should they help a stranger by giving them some of their hard-earned water, in exchange for a much-needed repair part, knowing how hard it is to find water? Should they eat strange plants, thereby running the danger of dying of poisoning? Should they search a plane wreck, possibly injuring themselves in the process?

Cloud Chasers is a roguelike that challenges players with a high degree of difficulty. Playthroughs cannot be saved and every decision a player makes is final. The deserts and events Francisco and Amelia encounter are randomly generated with no two playthroughs being the same.

Cloud Chasers is available on the Apple App and Google Play Stores for £2.50.

Blindflug Studios will donate part of the revenue generated by sales of Cloud Chasers to the aid organisation MOAS – “Migrant Offshore Aid Station”.

[quote by=”Moritz Zumbühl, founder of Blindflug Studios”]About a year ago we increasingly became sensitized to the fate of migrants in the Mediterranean and decided to put that issue at the center of our next game. MOAS Migrant Offshore Aid Station and their mission of saving migrants in need at sea aligns precisely what we wanted to portray with the game: That millions are on the move and taking on extremely dangerous journeys.[/quote]

Check out the official Cloud Chasers website for more information.