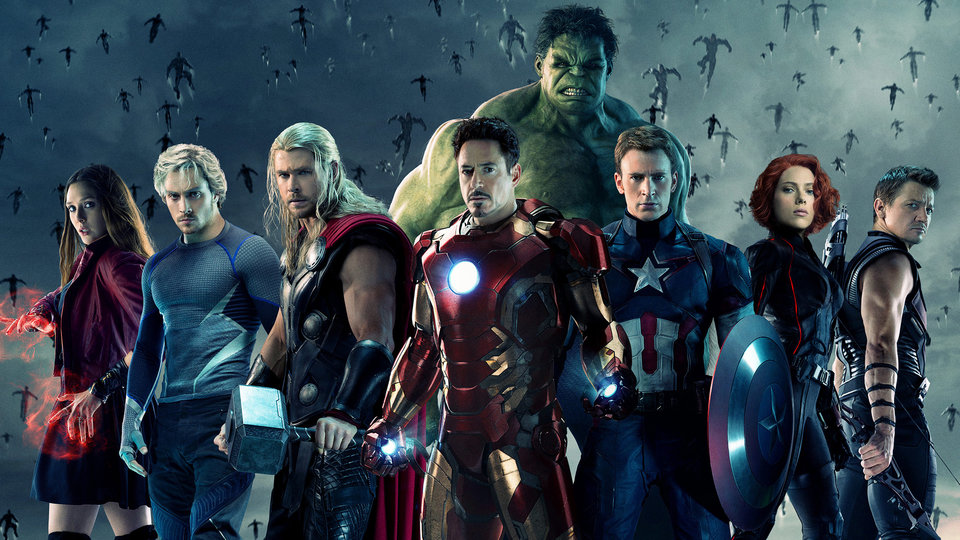 Humankind finds itself on the brink of extinction when an artificial intelligence named Ultron (James Spader) is unleashed. Captain America (Chris Evans), Iron Man (Robert Downey Jr.), Black Widow (Scarlett Johansson), Hawkeye (Jeremy Renner), Thor (Chris Hemsworth) and Dr. Bruce Banner aka The Hulk (Mark Ruffalo) assemble as The Avengers in a bid to save the world from this deadly threat.

It’s been a long time coming but Marvel Studios have finally unveiled their opus to an eagerly-anticipated world. Avengers Assemble was a near-perfect summer blockbuster so Age of Ultron had a lot to live up to. Thankfully Marvel’s biggest and best unite to create an adventure that delivers on almost every count.

In the capable hands of Buffy creator Joss Whedon, Avengers: Age of Ultron beautifully fuses the legacies of Iron Man, Captain America, The Hulk and Thor into an engaging and edge-of-your-seat adventure that will keep comic book fans happy whilst still having enough broad appeal to pull in the uninitiated. But its real success comes from how effectively utilised Hawkeye and Black Widow are this time around.

Clearly underused in the last adventure, both Jeremy Renner and Scarlett Johansson deliver sensational performances that really drive home the film’s strong emotional core.  They both give the film a nice level of humanity amongst the chaos and always keep the central themes of character development at the forefront of this story. The script also (crucially) shifts focus to the real people behind the super-powers. The human-interest part of this story really strikes a chord, especially in a wonderfully-paced sequence which finds the Avengers enjoying a bit of down-time at the start of the film.

The rest of the cast are exceptional and all of them have plenty of screen-time to shine. Robert Downey Jr., Mark Ruffalo and Chris Evans are the mainstays but Chris Hemsworth steals the show as Thor, delivering on both the action and comedy fronts. It’s also nice to see Scarlett Johansson and new addition Elizabeth Olsen having strong, pivotal roles that make a true impact in the Marvel Universe. Aaron Taylor-Johnson and Paul Bettany are nice additions to the cast and James Spader is quite perfect voicing the malevolence of Ultron.

The action set-pieces are all as spectacular as you’d hope. When The Hulk is under a mind-control spell and is unleashed in a populated city, it introduces us to The Hulk-Buster Iron Man suit. Their confrontation is amazing. Other highlights include fantastic duels between The Avengers and Ultron (in his many guises) and Paul Bettany delivering some memorable moments as The Vision. Once the final battle begins, I challenge anyone not to get chills when Thor, Black Widow, Hawkeye, Captain America, The Hulk and Iron Man unite.

The special features on the Blu-ray consist of never before seen deleted scenes, making-of featurettes, a gag reel and audio commentary. Whilst entertaining, more extras wouldn’t have gone amiss, although the deleted scenes are quite interesting in broadening out certain aspects of the story.

With amazing fight sequences, breathtaking spectacle, well-timed humour and plenty of heart, Avengers: Age of Ultron is a true blockbuster that will live long in the hearts and minds of fans the world over. Ushering in Phase 3 of Marvel’s grand plan with plenty of anticipation and hope, Avengers: Age of Ultron marks a new dawn for big-screen comic book storytelling. The fate and legacy of Earth’s mightiest heroes has never looked so positive. And keep watching until the mid-credit sting – it’s another sensational teaser clip that sets up a very big future confrontation.