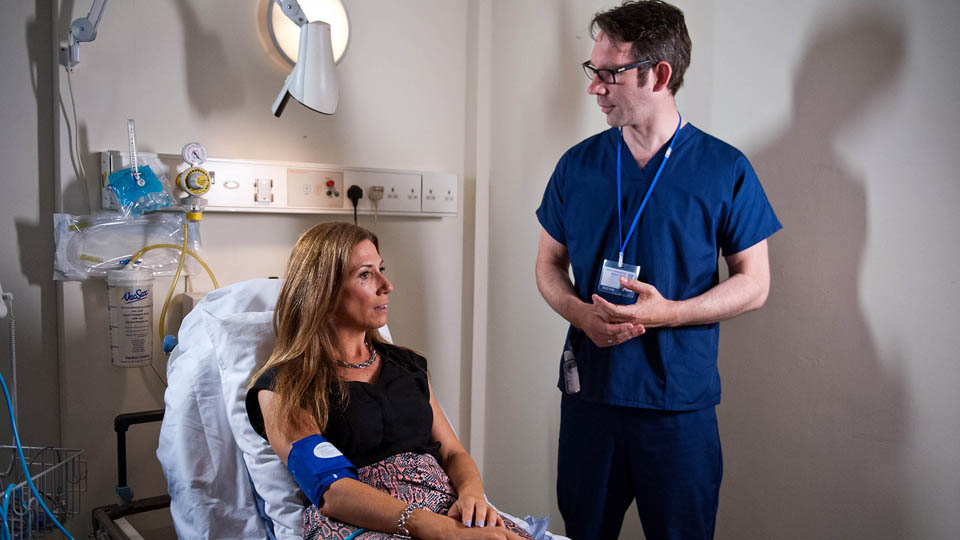 Welcome to our look at the week ahead in Emmerdale.  Read on to find out what’s happening with Jai’s court case, Ross being missing and much more.

Has Megan lost her baby?

Megan is still having tests at the hospital as she worries she may have lost the baby and that she needs to be at the court to keep her deal with Jai.  In the court, things are not looking good for Rachel as a scheming Jai puts on a performance as the perfect, caring gentleman.

Back at the hospital, Leyla is shocked when she learns Jai did indeed plant the drugs on Rachel.  Megan begins to realise what her deal with Jai means and is full of regret as the doctors come in to do an ultrasound.  Is Megan too late to make it to court?  Will it go Jai’s way anyway?

Later in the week, Rishi is angry with Jai for his behaviour and sides with Megan, who it appears has lost her baby.  Rishi tells Jai that he can’t think of one thing he likes about him.  How will his words effect Jai?  A caring Rishi offers to pay for Megan’s solicitor, who is grateful but tells him Jai’s assets are about to be frozen.

Emma wants to know what has happened to Ross

Pete is still burying his secret deep, leading Debbie to think that he’s punishing her and that their relationship has no chance unless he opens up.  James tries to convince Debbie to change her mind regarding Emma looking after Moses. Debbie admits she is close to breaking point and agrees on the proviso Emma isn’t left alone with him. When James brings Moses home to Dale View Emma is delighted. Later, Emma’s mood is shattered when she finds Ross’ old phone and then the family discover his wallet leading them to worry that something sinister has happened.

Emma confronts Debbie, believing that she knows more than she’s letting on about Ross’ whereabouts, but things soon get heated.  Clearly rattled, Debbie later heads to talk to Cain and is horrified when he tells her that he left Ross in the back of a van, balanced over the quarry and that he had vanished when he went back.

In the Woolpack, a furious Emma questions Cain, who admits to having warned Ross off and giving him a fake passport.  As Emma blames Cain for any harm that might have come to her son, her other son, Pete, wastes a chance of telling Debbie the truth, instead agreeing that it looks bad for Cain.

Emma calls the police to Butlers Farm to speak to an unusually flustered Cain.  She later tells Cain that she won’t rest until she can prove he was behind Ross’ disappearance.  When Pete learns the police are involved he’s left panicked and things get worse when they announce they have found a body they believe could be Ross.

Ashley gets forgetful, but will Sandy pay the price?

Ashley desperately wants to be there for the village and when he hears about another vicar doing the memorial service he decides it’s time he returned to work.  However, when the day arrives his nerves may just get the better of him.

Harriet agrees to take Sandy to a hospital check up, with Ashley insisting that he’ll sort a taxi to bring him back when the appointment is over.  It looks like he is preoccupied with the memorial service as Sandy waits at the hospital and bumps into some youths who scope him out.

After deciding his taxi isn’t coming, Sandy goes to wait for the bus instead, only to be greeted by the youths he met earlier.  What, if any, will be the repercussions of Ashley’s forgetfulness?  It looks like the stress of the week isn’t helping Ashley’s epilepsy as he has another fit, this time at the garage.

Kirin and Belle present their cordial business idea to Rishi roping in Laurel who gets a touch of the deja vu when she ends up dressed in a bee costume.

Jimmy has to sell his house to keep the business afloat, but of course hasn’t told Nicola yet.  We’d rather him than us!

Bernice wants to find out which way Lawrence swings.  He obviously didn’t pick up on her hint about Paul last week.  Will she find romance with Lawrence?

Joanie confides her worries about a bruised Sam to Zak, further rousing his concerns.

Tracy finds a DVD with Val’s last wishes, but Pollard doesn’t want to watch it.