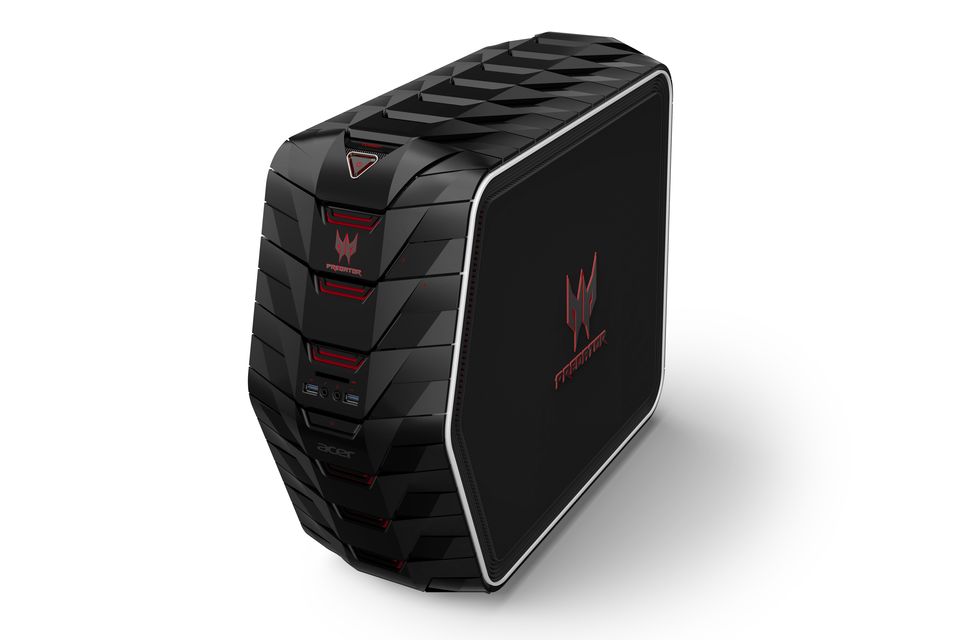 Acer have announced the release of the Acer Predator G6-710 gaming desktop. Acer will unleash the full gaming portfolio at IFA 2015 in Berlin in September.

[quote by=”Andrew Hou, general manager, Stationary Computing Business Unit, Acer”]We are thrilled to unveil our new Predator gaming machine for hardcore gamers that’s as enthralling on the exterior with its belligerent armour design as it is on the inside. It combines all the bleeding edge technology gamers need to perform at their best. And with performance to spare, they can rest assured their investment will last for many, many gaming sessions.[/quote]

Powered by the latest 6th Generation Intel Core i7-6700K processors, the Acer Predator G6-710 runs the latest Windows 10 OS, and supports up to 64GB of DDR4 dual-channel memory. This huge amount of RAM futureproofs the G6-710 against new game releases, and lets users play, stream, work or have any other compute intensive tasks running with ease.

The “One-Punch” CPU overclocking capability is combined with the IceTunnel cooling system to keep the system chilled at excess speeds. Network connectivity comes in the way of super-speedy Wi-Fi 802.11ac. All of this is monitored and controlled from the PredatorSense control hub, which offers full running stats such as CPU clock rate, temperature, and the fan speed. Players can also adjust the lighting, fan and the overclock stage through the portal.

The G6-710 is running NVIDIA’s GeForce GTX 980 with UHD 4K2K (3840 x 2160) display capabilities. Paired with a matching high resolution monitor, such as the curved Predator X34 with G-SYNC technology, even the most demanding gamer can enjoy visuals with incredible detail free from lagging and stuttering.

The G6-710 comes with Creative Sound Blaster X-Fi MB5 (with Environmental Audio Extensions (EAX) 5.0 and 5.1 channel audio support) with new UI and customisable personal sound profile so users can tune the system to a new level of audio immersion. Whether on headphones, external speakers or the unit’s audio hardware, the ability to clearly hear specific sounds in a gaming environment is key to the whole experience and it’s just one of a few elements of SBX Pro Studio that support optimum gaming, video and audio across the board. With four audio jacks, this unit is also perfect for group play.

All this is packed into a radically redesigned armour-like shell crafted to look the part of an unstoppable fighting machine. The casing allows for bi-directional inflow of air to enable the IceTunnel cooling, and also houses the expansion slots (1 x PCI-E X16 slot, 2 x PCI-E X1 slots, 2 x M.2 slots), letting the beast support up to 12TB of storage (expandable by a further 512GB with SSD). Outfitted with the included SteelSeries APEX RAW keyboard and SteelSeries Sensei RAW gaming mouse, and lavish USB port provision (6 x USB 3.0/ 2 x USB 2.0), there’s ample room to add in any extra peripherals a gamer needs to annihilate the competition.

The Acer Predator G6-710 desktop PC will be available mid-September in Europe with prices starting at £1,299. To find out more details check out the official Acer website.