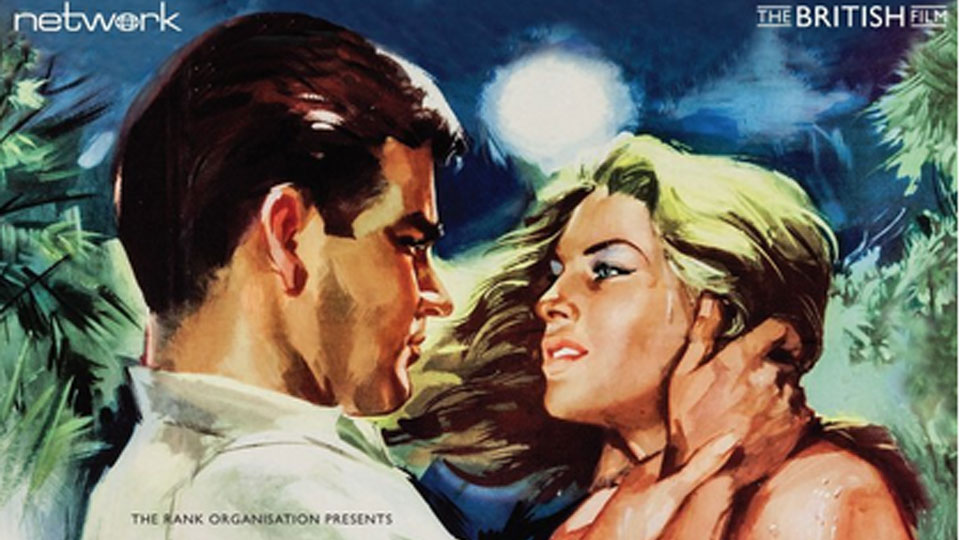 1958’s Nor the Moon By Night is a potboiler not without its charms that is very typical of the Rank Organisation’s output at the time. It combines action and adventure with romance to please a wide audience.

The film is most notable now for central performances by significant actors. Patrick McGoohan would, a decade later, be the highest-paid actor on British television for his starring roles in Danger Man and The Prisoner. His co-star, screen beauty Belinda Lee is remembered, despite her few films and short career, for her tragically young death at the age of only twenty-six. The other two main actors, Michael Craig and Anna Gaylor, are still with us, and were very busy actors at the time, but they tend to be less well-remembered.

The story sees brothers Andrew (McGoohan) and Rusty (Craig) living in Africa as game wardens. After a purely epistolary romance between Andrew and a young British woman Alice (Lee), she abandons her sick, dying mother (oddly we aren’t meant to lose sympathy for her) and flies out to Africa to be with him and live happily ever after, but quickly discovers it isn’t the paradise she was expecting. Not only that but she gets along much better with Rusty, whilst her attentions to both men attract the jealousy of neighbour Thea (Gaylor). However, there are enough men and women to go around – four is a neat number – so a cosy resolution is well-signposted. Subplots see corrupt landowners and bush fires further raising challenges for the brothers and the women to survive in a corrupt and hostile land.

Nor the Moon By Night is very much a product of its time, and it has to be viewed as such, because it offends almost all modern sensibilities. Belinda Lee does little more than act as a damsel in distress who needs rescuing by men, and Michael Craig even scoffs at her idea that she might join him on a hunt as she would clearly be more of a hindrance – and probably twist her ankle or faint. If we’ve learnt anything from the death of Cecil the lion, it’s that hunting is no longer seen as a noble or even reasonable pursuit – and we were appalled when Michael Craig’s character shoots and kills an elephant, which seems of no immediate threat to Belinda Lee. McGoohan, established in his opening scene as an animal-lover whilst gently playing with a lion cub (these moments are lovely, and predate Born Free by almost a decade), later kills an adult lion – though this is at least out of self-defence, and the deed done up close in hand-to-hand combat, with McGoohan taking the only steps possible to ensure his survival. There’s also, perhaps most pressingly, the issue that the country is run by the white men, and the majority black population (most of whom are barely characterised, and not sympathetically) seem to be inherently drawn towards corruption and laziness, requiring the decent, honourable white men to run their country for them whilst saving the indigenous population from themselves. It’s all rather patronising.

Whilst Nor the Moon By Night strikes us now as a museum piece, it’s hard to take its 1950s attitudes in our stride, especially for viewers born after the movie was made. Nevertheless, taken on its own merits, Nor the Moon By Night tells a decent story, even if it is neat and predictable. It was the sort of movie that left audiences having enjoyed a little of the glamour of exotic locations (actual filming in South Africa is another commendable aspect of the film – though the cinematography is pedestrian at best) and a bit of comfortable danger and romance, without burdening them with any troubling thoughts as they left the picture houses sated.

We’ve previously noted that Patrick McGoohan, who was indisputably one of the finest classical actors of his generation, excelled at playing angry loners, but had little aptitude for romance. Here, he surprises us, covering his customary spikiness with a certain tender charm. There’s no disguising his cold, intense eyes, but this is a softer side to McGoohan, and his considerable army of fans may enjoy seeing him play against type (OK, he’s still heroic, at least), and can be reassured that, despite third billing, he has plenty of screentime and is far more memorable than Michael Craig – an ever-safe-if-not-exhilirating pair of hands. It has to be said that whilst Belinda Lee glowers with passion, it’s a feisty performance by Anna Gaylor that wins our best actress award. The part of a teenager is written thinly, rendering the character childish, but Anna Gaylor brings the best out of it and we grow to care about the sweet, innocent Thea and her problems with her brutal, criminal father.

The colour film stock used, like many of the era, leave the overall look slightly muted, and DVD is the best format for it, and for the original box ratio of the picture. This is a clean copy with reasonable sound, lacking the clarity that only more big budget movies of the era could aspire to. An image gallery accompanies the feature.

Nor the Moon By Night is released as part of Network’s The British Film Collection.