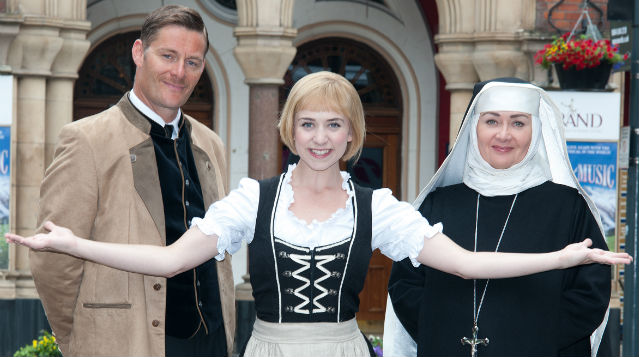 The Sound of Music returns to the stage in a new production, which opened at Leeds Grand Theatre this week to standing ovations.

Playing the iconic role of Maria von Trapp is Danielle Hope, who captured the hearts of the country when she won BBC Television’s Over the Rainbow and made her professional debut as Dorothy in The Wizard of Oz at the London Palladium. Danielle has since played Eponine in Les Misérables in London’s West End and Narrator in Joseph and the Amazing Technicolor Dreamcoat.

Joining Danielle and Steven are West End stars Jan Hartley (Phantom of the Opera and West Side Story) and Sarah Soetaert (Chicago) who will play the Mother Abbess and Baroness Elsa Schrader, respectively, with Howard Samuels as Max, Grace Chapman as Liesl, Luke George as Rolf, Kate Milner Evans as Frau Schmidt and Martin Dickinson as Admiral Von Schreiber.

Produced by Bill Kenwright, directed by Martin Connor, choreographed by Olivier Award winner Bill Deamer, musical direction by David Steadman, this wonderfully lavish new staging of the classic musical coincides with the 50th anniversary of the film version – the most successful movie musical in history.
The unforgettable score features some of the most memorable songs ever performed on stage, including Edelweiss, My Favourite Things, Do-Re-Mi, Climb Ev’ry Mountain, So Long, Farewell and of course, the title song, The Sound of Music.

The Sound of Music is at Leeds Grand Theatre until Saturday 1st August. Tickets are on sale now priced from £18.50 too £42. Book online at www.leedsgrandtheatre.com or call box office on 0844 848 2700.

In this article:Leeds Grand Theatre, Musical, The Sound of Music, West Yorkshire