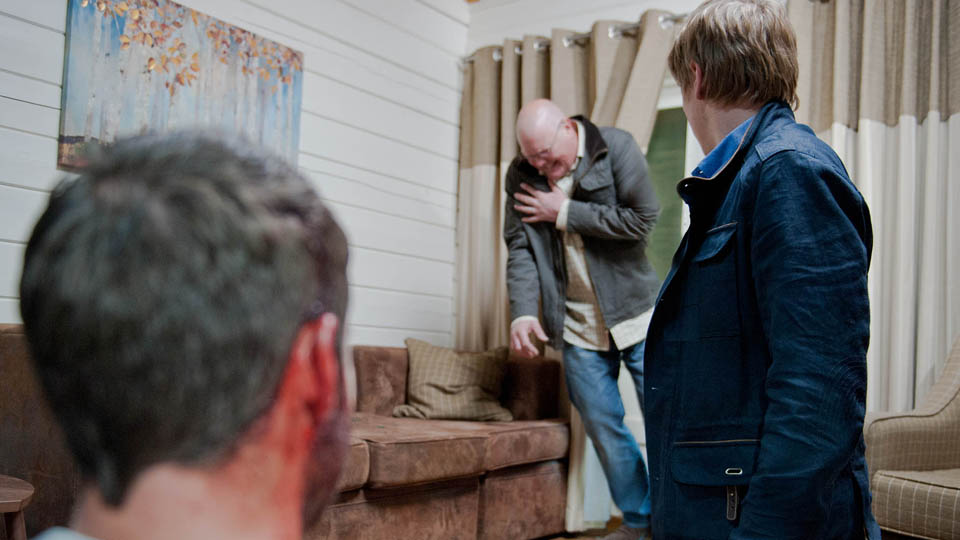 Welcome to our weekly look at what’s going to happen in Emmerdale.  Read on…

Still fearful of how far Robert will go, Paddy takes a call out to Home Farm to stop Rhona being anywhere near him.  When he gets there he sees a smartly dressed Aaron and worries that him and Robert may be seeing each other again and decides to tell Lawrence about Aaron’s criminal record.

Oblivious to what’s going on between Paddy and Robert, Chrissie invites him and Rhona for lunch to thank him for coming on the call out, but Robert tells him in no uncertain to make his excuses.

When Aaron learns that Paddy’s been talking to Lawrence, he confronts Paddy who has no choice but to tell Aaron that Robert tried to kill him.  Aaron is sickened by what he hears, but knows that Paddy wouldn’t lie to him.  Paddy demands that Aaron stay away from Robert, but Aaron has other plans as he sets up a date for the two of them at a lodge retreat.

Aaron’s on edge as he waits, but manages to act normally when Robert arrives.  When his back is turned, Aaron sets his mobile phone to record hoping to catch Robert’s confession as he starts asking him questions.  Robert is more interested in kissing and soon Aaron can’t pretend any longer.  Pushing Robert away, he starts accusing him of trying to kill Paddy.  As Robert, tries to weasel his way out soon the conversation turns to Katie’s death and Aaron is utterly dumbfounded by what Robert admits.  He launches himself at Robert who lashes out with a beer bottle in defence, that knocks Aaron unconscious.  Panicked he picks up Aaron’s phone to call for help, but what will he do when he sees that Aaron’s been recording their conversation?

Next time we return to the lodge, Aaron is tied to the radiator as Robert walks in with food and water.  It’s not long before the pair are arguing over Katie’s death and Robert pulls out a gun.  It’s at that point that a frantic Paddy arrives at the lodge and as he slams the door open a gun shot rings out.  It’s a terrifying scene at the lodge as Paddy is in pain, Aaron is still tied up and Robert still has the gun.

Later, Chrissie’s world crumbles when she learns about Robert’s affair and as her heartbreak turns to fury, it’s clear she’s out for revenge.  As she arrives at the pub looking for Robert, is she about to name and shame in front of everyone?

Laurel and Marlon. Is it all over?

As Laurel attends her mother’s wake, emotions are boiling up and a blunt remark from her sister has Laurel blurting out more than she should.  Back at home, she moves in for a kiss from Marlon to comfort her.  Is there one last chance for their relationship?

It seems that it’s all too late as Marlon tentatively starts to plan their separation with Laurel and the pair seem united in the decision.  Laurel turns again to Ashley for support as she accompanies him on a visit to see the Bishop.

Later, Marlon and Laurel brace themselves as they prepare to tell the kids about the split.

Jai sets up Rachel with a drugs bust

Megan and Jai head to a custody meeting about Archie, with Megan doing her best to hide her dislike of Jai and play the game.  It seems Jai wants to play a different game, as he hands Rachel the keys to the cottage she rents from him, in what looks like a kindly gesture.

However, all is not what it seems and as Rachel and Sam happily move back into Tenants Cottage, there’s an ominous knock on the door.  Both Sam and Rachel are stunned to see a police officer with a  warrant to search the house for drugs.  Just what has Jai done?

Later in the week, Jai is looking very smug as he’s convinced his custody battle is over and suggests celebrating with Megan.  We’re not so sure she’s in the mood to celebrate as she makes a mystery text.  Meanwhile, Jai goes behind Megan’s back to Leyla, telling her that he’ll soon leave Megan and they can be together.

This one will twist and turn for weeks to come we think!

Ross is on a secret mission for Charity

Debbie is gutted when Ross tells her that he’s not ready to leave just yet.  Instead he asks Moira for a job at the farm and has an evil glint in his eye as she takes him on.  What has Charity tasked him with doing?

Cain is unsettled to open another visiting order from Charity and Moira wastes no time in putting it in the bin.  Ross watches on and sees his first opportunity to stir things up.

Debbie is getting desperate to end things with Pete, but Ross covers knowing that he’s got a deal with Charity to fulfil that he can’t tell Debbie about.  Later, when he sees Noah moping about a new cruel plan forms in his mind.

Rodney and Joanie go on a date and drunkenly interrupt the Dingles when they come home.  Was the date a success?

It seems romance is in the air as Bernice and Lawrence get flirty too!

Victoria and Adam return from their honeymoon and Vanessa asks him to come to the baby scan with her.

Val sits with her solicitor, trying to defend her actions with Bob and the bank loan.  How will she react to what the solicitor has to say?