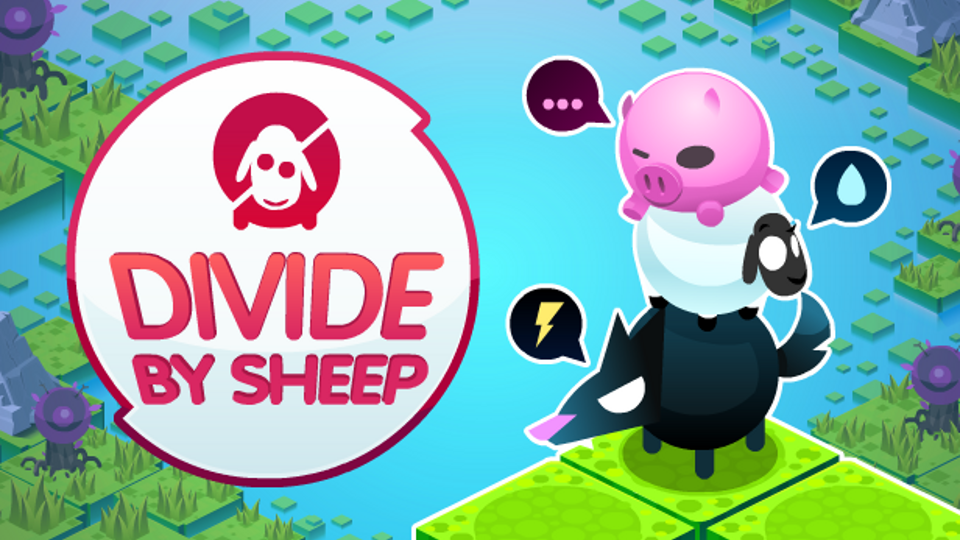 The Grim Reaper is feeling a bit lonely and comes up with a cunning plan to make sheep his friends. This involves creating a giant flood to kill them all so that they can be together in the afterlife. Sounds a bit bonkers? Welcome to Divide By Sheep.

The story isn’t actually all that important but does try to explain the reasons behind what you are tasked with in the game. The sheep are stranded on little islands and your job is to guide them to safety.

Each level takes place on a single screen that features a variety of different shaped islands. The surface of these are made up of squares and each sheep can occupy a single square. By swiping a group of sheep you can make them jump to an adjacent island.

Your aim is to get them to a series of life rafts which will take them to safety. To make things a little more interesting each life raft has a quota that it needs to fill. In order to be successful you need to get the exact number of sheep to a life raft before it will leave. If you get too many sheep to a raft then you fail to earn a star.

Levels start off fairly easy as you get to grips with the gameplay. Gradually new elements are added and the difficulty increases. Some levels you can solve quickly while others will leave you stumped. It’s often quite easy to earn at least one of the stars on offer though so you can continue to make progress on other levels while you think about a tricky one.

Initially you only need to worry about the sheep and getting them into the correct size groups. This is done by jumping a large group at a smaller island or merging groups when there aren’t enough spaces. So for example jumping a group of five at an island with three squares will leave you with three sheep. The other two will drown but there is no penalty for this you are expected to sacrifice your sheep.

Eventually things get more complicated. For example wolves are introduced which will eat sheep. You can move wolves around just the same and even need to rescue them. When a wolf meets a sheep it will eat it and then stay in the same position for the rest of a level.

Other things that are added early on include bounce pads, fences, TNT islands and laser gates. Fences can’t be jumped over and bounce pads will split your sheep up. TNT islands explode when you leave them. The more interesting are the laser gates which slice your sheep in half.

A split sheep occupies two squares but can still be moved around. When two halves of a sheep make it to the life raft they are taped together to make a whole one. Split sheep come with plenty of cartoon gore. Parents will be pleased to hear that they have the option of disabling the gore.

The game is fun and is challenging for all ages. The clever thing about it is that the levels are essentially all maths puzzles. Beating levels forces you to think about addition, subtraction, division and fractions. These concepts are hidden by the game and younger players will think they are just having fun and won’t realise that they are learning at the same time.

Our only real issue with the game, apart from the levels that we are currently stumped on, is the way new concepts are introduced. The game uses simple cartoons to explain the various mechanics and some of them are a little obtuse. They do give enough of an idea to get you going and a few minutes play always teaches you the rest.

Divide By Sheep is a fiendishly difficult maths puzzler with a wonderfully dark sense of humour. It will challenge players of all ages and entertain for hours.