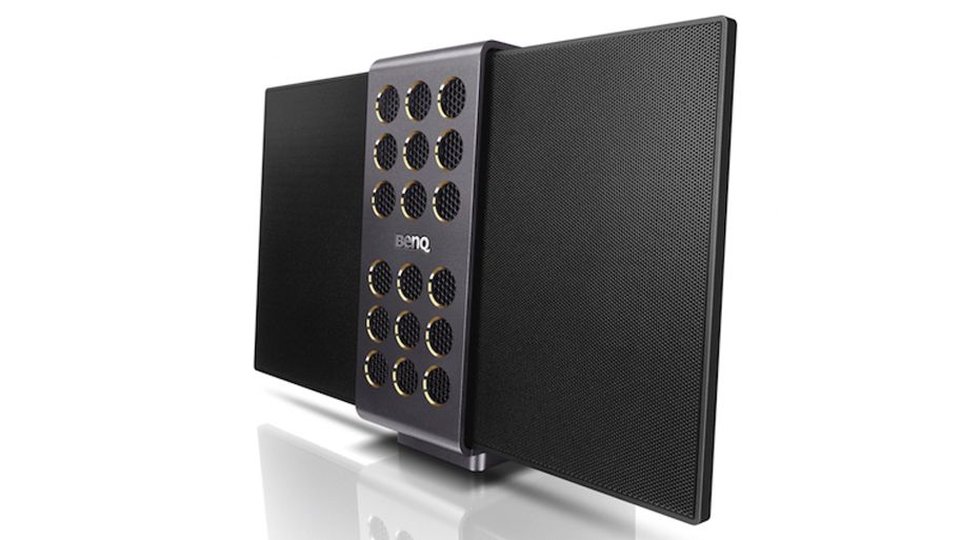 The market is getting flooded with Bluetooth speakers as consumers are faced with a wealth of options and a very wide variety in prices. With the reliance for most music listeners to enjoy their library on tablets, smart phones and laptops, the importance on good quality sound has been lost in the mix but it seems that audiophiles are making somewhat of a comeback. BenQ has recently released its much-buzzed BenQ treVolo portable electrostatic Bluetooth speaker.

First impressions of the BenQ treVolo are positive. The speaker features a compact and appealing design with the speakers on either side packaged flat against the main bulk of the product. Before you use the speaker of course, you need to open the speakers out and thanks to its snazzy design it likely will blend into its surroundings wherever you put it. The emphasis on the BenQ treVolo is its portability. When fully charged the speaker gives up to 12 hours playback, which should be more than enough for the average user. If you’re using the speaker at home then you can use the adapter that comes with it and just plug it in if you prefer.

Setup for the speaker is relatively straightforward. With the press of two buttons, the device becomes searchable so you can pair it with a Bluetooth device. We paired it with a MacBook Pro and the setup took all of 2 minutes. For those who don’t want to take advantage of the Bluetooth capability you can connect it directly to a device using the line out or micro USB ports.

As well as playing your music, the speaker can also be used as a speakerphone for incoming calls. It’s a nifty feature and one that is clearly designed to make smart phone owners life easier. How much you’d actually use the speaker for phonecalls is likely debatable but it’s a cool feature to have should you want to use it.

Not everything about the BenQ treVolo speaker is as impressive as you may expect though. In terms of being portable it may be fairly small but it is pretty heavy. The weight could put people off carrying it round with them and we can see this will disappoint a lot of people. It’s far heavier than the average laptop or tablet so it’s not quite as portable as it promises to be.

One of the biggest downsides of the BenQ treVolo is the sound quality. The design makes the sound directional meaning that if you have several people listening to it in a room they will all hear something slightly different. The quality of the audio output isn’t great and we found a lot of the music played sounded muffled or tinny. There are three audio modes you can switch through but honestly we couldn’t tell much difference between them. If you are sat in front of the speaker, you get the best audio quality but anywhere else the sound is disappointing.

Another downside is the lack of a remote control. BenQ has tried to make up for this with a smartphone app that gives you limited control of the speaker but a little remote wouldn’t have gone amiss. Most users will likely just control the speaker using the buttons on the top of it that allow you to change the sound mode, skip tracks, answer and end calls.

The BenQ treVolo speaker is unfortunately a frustrating product. At a cost of £229 it’s not a cheap product and we don’t think it really delivers what it promises. Despite a sleek design and good usability, the actual audio produced is disappointing and we’ve heard much better from far cheaper speakers. If you want a Bluetooth speaker to stick on your desk or a shelf that you’ll be spending a lot of time in front of, then this is a good choice but if you’re looking for a rich, warm sound that will fill a room at a party then the BenQ treVolo isn’t the right speaker for you.