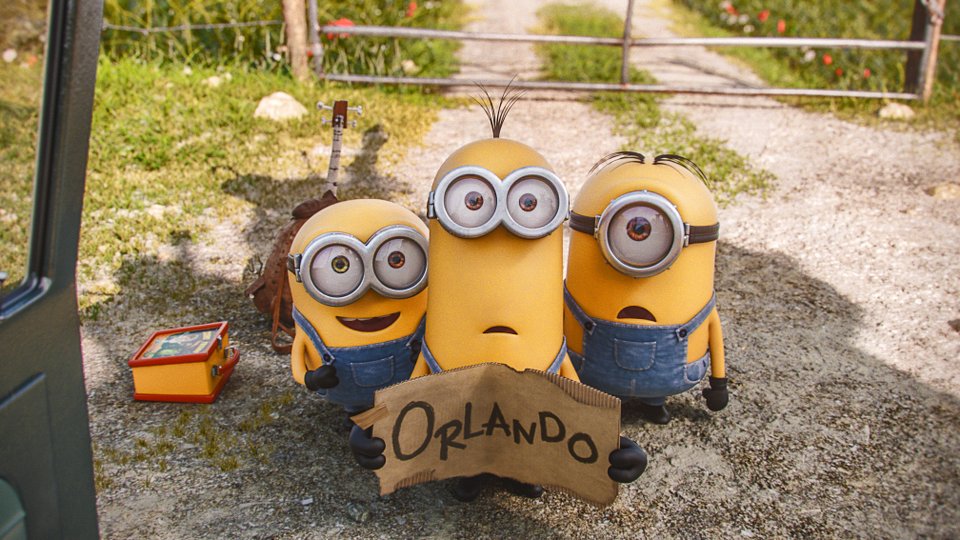 The Minions have finally landed in cinemas. Starting as single-celled yellow organisms, Minions evolve through the ages, perpetually serving the most despicable of masters.

Continuously unsuccessful at keeping these masters – from T.Rex to Napoleon – the Minions find themselves without someone to serve and fall into a deep depression. But one Minion named Kevin (Pierre Coffin) has a plan, and he—alongside teenage rebel Stuart (Pierre Coffin) and lovable little Bob (Pierre Coffin) —ventures out into the world to find a new evil boss for his brethren to follow.

The trio embarks upon a thrilling journey that ultimately leads them to their next potential master, Scarlet Overkill (Sandra Bullock), the world’s first-ever female super-villain. They travel from frigid Antarctica to 1960s New York City, ending in mod London, where they must face their biggest challenge to date – saving all of Minionkind from annihilation.

Directors Kyle Balda (middle) and Pierre Coffin (far right), who coincidentally also voices the lovable Minions, came to London to promote the movie, so EF’s Jason caught up with them to discuss all things Minions, the process of making the movie and why London played such a big part in the film.

Congratulations on the film. Can we begin with the Minions distinctive language? How did that come about and what was your process for creating it?

Pierre Coffin:  Well, it started with Despicable Me and we did some research and work on them then.

It was written down in one scene that these guys were going to say ‘Gru, Gru, Gru!’ when he was coming onstage. When we started animating this shot we all saw the potential of them to be able to live up on their own and be funny cutaways to help the movie – to give it rhythm.  So we started adding stuff. And the more we added stuff, the more we began wondering ‘how can we do gags with just sound characters?’ That’s when I started experimenting with gibberish – nonsensical words or words that were sort of English, but not really… and that was Despicable Me 1.

When Despicable Me 2 came along the Minions were more central to the main story and they had to be a little more understandable. So that’s when I started adding stuff that was hugely inspired by… usually, what I ate for lunch! Banana for instance! So that became part of the language. What we learnt on the first one was that the words weren’t really important, it was how they were said and the sense and music of their language.

So on the third one, the beauty of it, again, was it came from the concept that they’ve been in existence for a long time and serving all these masters all over the world. And that meant it made total sense for the Minions language to include all of the languages of the world like Italian, Spanish, Korean, Japanese etc. So every time I had an argument between two Minions or one Minion was telling a joke, I had to find a quality of words that together helped me say or convey the emotional state of those characters. So basically it’s all about the performance rather than the words.

Did you expect this kind of success for the Minions and what do you think is their secret to success?

Pierre Coffin: Oh man, I wish I knew! (laughs). I think that from the moment you start thinking about the success element, that’s where you fail. That’s my theory and I have a tendency – probably because I’m French – to not like what I do in the sense that I enjoy my work but never think about it on a success level because to me that’s arrogance. Our producer is also that way. He has a very acute eye on the stories and characters. I remember asking him once on how he knows how the movie should look and feel and he said the same. So that works both for the positive and negative in the process.

Kyle Balda: Yeah, a lot of it you kind of find in the process of the movie and the process of the characters. We try so many different things and then things don’t work, so we try it again. And when you start storyboarding or working with the characters there’s a kind of intuition or trust with the characters that tell you where they want to go too. So that process makes it really hard to think in terms of a formula of what’s going to really hit with people. So it was completely unexpected that they have become as popular as they have become.

What was the attraction for you both for setting the film in 1960s London?

Kyle Balda: Part of it was that 60s London had such a graphic style to it – the psychedelic, the colours and the designs of the cars and the way people dressed. The music – we are huge fans of that era of music – just to try and really put them in a good location. London is really important because it’s a huge part of the narrative. The 60s was there to have some fun with mostly.

Pierre Coffin: What was super-cool as filmmakers was that it could give us licence to go into ‘how do we create the movie’, ‘how do we shoot it’ – to have those sorts of lenses that really differentiates ourselves from the others. When we see other films from other studios we sometimes think ‘ok, that’s the same design and the sort of same look’ and that gave us licence to basically make a timepiece which is really fun. And music was obviously a big part of it. Actually every time we went to put music in the movie we thought we’d get turned down (due to cost) but we didn’t, to the point of us saying ‘wow we should have asked for more!’

The opening of the film is a real highlight, when we are introduced to the Minions and their many previous masters from the past. Were you able to include everything you wanted to in this sequence?

Pierre Coffin: I remember our producer saying ‘oh man, that thing in the past, we need to make 20mins of it!’ And we thought, ‘Wow 20 minutes! Really?! That’s going to feel weird once we get into the real story’. And so ultimately we nailed it down to 10 minutes. It used to be way longer and we still have all the shots.

So extra footage for the DVD/Blu-ray release?

Pierre Coffin: Maybe or maybe an extended version of the movie.

Is it painful to delete footage from a film?

Pierre Coffin: We are so used to it!

Kyle Balda: It’s painful but it’s part of the process. You get attached to stuff for sure that you have to let go of.

Minions is out in cinemas nationwide now.

In this article:Despicable Me, Kyle Balda, Minions, Pierre Coffin