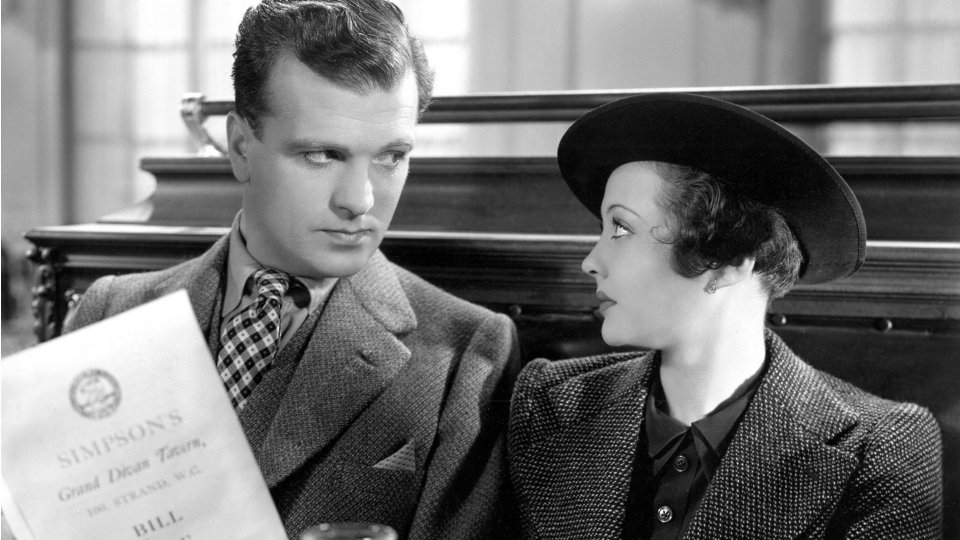 In 1936 Alfred Hitchcock had yet to be lured to Hollywood, but he already had a string of popular British films behind him by the time Sabotage hit the screens. With tensions building in Europe and WWII looking increasingly inevitable, Sabotage tackles the subject of secret foreign agents operating in London and posing a terrorist threat and risk to national security whilst ordinary Britons lived in a state of uncertainty and paranoia. It’s prescient and timely, but also timeless. It’s impossible to watch Sabotage now and not think of the 7/7 bombings in London and realise how terror threats have long overshadowed England’s capital city.

A deliberate act of sabotage cripples Battersea Power Station, plunging parts of London into darkness. Mrs Verloc (Sylvia Sidney) runs a cinema, and her disgruntled customers demand a refund when the power goes out. Only her husband, a mysterious European played by Oscar Homolka, seems pleased by the blackout. Little does Mrs Verloc know that her apparently peaceful life with her husband and younger brother (a brilliant performance by Desmond Tester) is about to come to a sudden and traumatic end, and even the friendly greengrocer next door, Ted (John Loder) isn’t everything he seems.

Sabotage is typical Hitchcock, and there are plenty of pointers to motifs that would occur in his best-known work some years later: light bulbs, caged birds and deadly packages all crop up significantly. The best sequence in the movie is when a package containing a bomb is innocently carried through central London by Desmond Tester as the clock ticks down towards detonation. It is an unbearably tense sequence of brilliant film-making by a director who would make his name on building suspense and keeping his audience on tenterhooks.

If you look behind the oddly stilted and clipped pronunciation of the actors, there are some terrific performances to enjoy. Oscar Homolka was always a mesmerising presence on screen, and so he proves here as an apparently quiet-living man, but one hiding a terrible secret. Hitchcock shoots his characterful face in shadows, and it’s an effective approach reminiscent of film noir, bringing the best out of the black and white film stock. John Loder and Sylvia Sidney are everything you need heroic male and female leads to be, whilst Desmond Tester is streets ahead of most child actors, creating a colourful young man whose fate you care about, and it’s unsurprising he maintained an acting career in fits and starts in adult life, even if Sabotage is his best role.

At eight decades of age, and a film in which the dead now entertain the living, it’s unsurprising that the quality of the sound and picture is not as pristine as we enjoy with modern films. The picture quality suffers especially in scenes shot with low levels of light, but the side-effects add to the mystery of the piece and to the disconcerting subject matter. Having been scrubbed up, Sabotage is very watchable, and it’s a great one for Hitchcock aficionados to enjoy since he pulls no punches in the story-telling and creates a picture full of his trademarks.

An extra on the disc well worth watching is a piece about movie locations in which Robert Powell visits the London locations used in the film, such as the aquarium at London Zoo, and points out that there’s a cameo appearance by a very young actor who would go on to great fame as one of the Carry On gang…