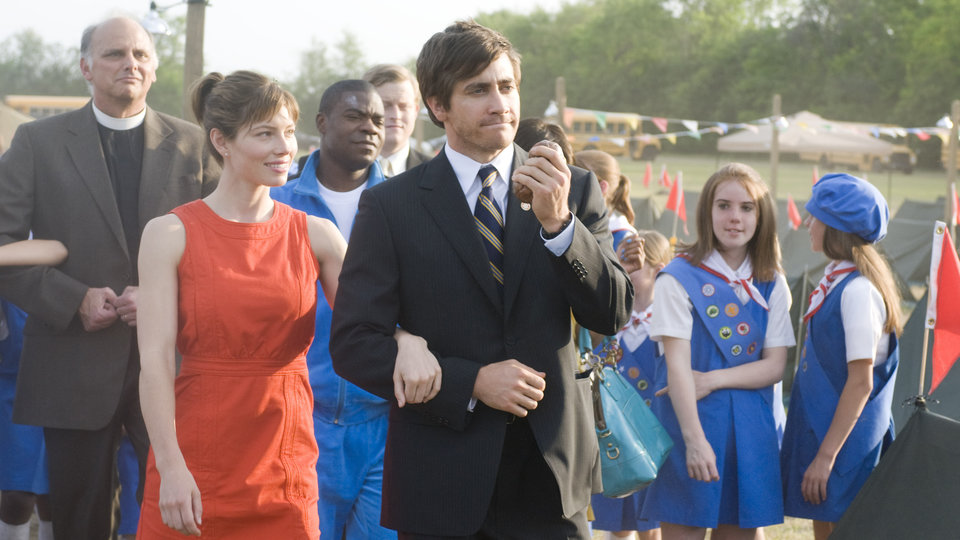 The story follows Alice Eckle (Jessica Biel), a somewhat naïve roller-skating waitress in a small Indiana town, who is about to get engaged to her trooper boyfriend, Scott (James Marsden). At the fancy Gondola restaurant when Alice has an engagement ring on her finger, a clumsy workman accidentally shoots her in the head with a nail gun.

Seconds before the nail is removed the surgeons are forced to abandon the operation due to Alice’s lack of health insurance, leaving the nail lodged in her head and causing strange erratic behaviour. Her fiancé, Trooper Scott, then has a change of heart on their marriage, feeling the nail embedded in his wife-to-be’s head will cause more trouble than it’s worth.

Alice then heads to Washington D.C. to meet the charming but rather clueless Congressman Howard Birdwell (Jake Gyllenhaal) who has vowed “to help all the people”. So Alice ventures to Washington D.C. to petition for his introducing a health care bill. When the two meet sparks fly, and they realise that their love could interfere with what they stand for.

The film was originally directed by Academy Award nominated filmmaker David O. Russell (American Hustle, Silver Linings Playbook), but due to difficulties with financing he decided to the leave the film in 2010. The film was completed without Russell’s involvement and the film is credited to “Stephen Greene”, a synonym used after Russell disowned the project.

Check out the trailer and poster for the film below.