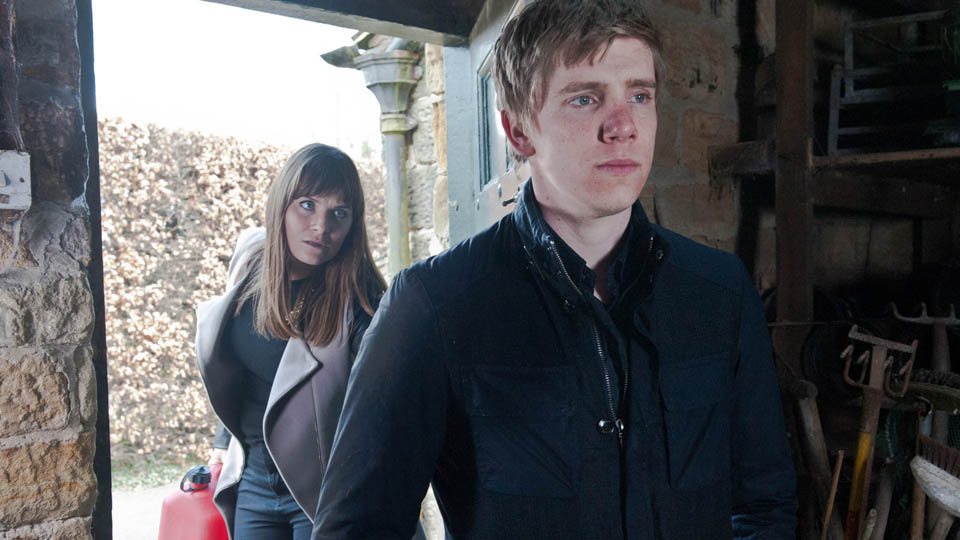 Welcome to our weekly look at what’s in store for your favourite villagers in Emmerdale.  Read on….

Chrissie has had enough of Robert

Robert is still being shunned by Chrissie, but after a chat with his brother Andy, he makes another effort to win her back.

Chas is proud of Aaron when he tells Robert that Chrissie was right to get rid of him, but later he ends up supporting a drunken Robert and taking him through to the back of the pub to get him some water.  When Robert moves in for a kiss, will Aaron respond or push him away?

Chas is worried about Aaron and her and Paddy discuss him moving in to the vets place whilst Robert is still staying at the pub.  She needn’t worry as Aaron decides to go and see Chrissie and put an end to it all.

When he’s with Chrissie he manages to let it slip that he was part of the raid on Home Farm and then he lies that Robert was really cut up about the whole event, making Chrissie’s resolve weaken.  However, later she hears Aaron and Robert talking and is furious.

Chrissie lays a trap for Robert and whilst on a walk she pushes him in to a out-building, looking like she is going to exact a deadly revenge.  As the penny drops with Robert that Chrissie overheard him and Aaron, Chrissie pours what looks like petrol around a terrified Robert as Lachlan watches on, unseen.  She strikes a match, but will she light the liquid?

Alicia is conflicted by Lachlan

After hearing that Lachlan has a girlfriend, Alicia is worried and wants to warn the girl, but when Harriet refuses to help her find out who it is, Alicia takes matters into her own hands.  As her actions take their toll on Lachlan, he gets set upon by a couple of boys and takes refuge with Belle who show’s him what Alicia has done.

Later, Alicia drives up to see Lachlan surrounded by a menacing group of lads and realising it’s because of her, she battles with a decision;  to help Lachlan or throw him to the hounds?  It seems she can’t leave him to the mob and gets him in her car and phones the police.  What will they talk about locked in a car together?

Finn is suspicious of Emma’s behaviour towards his dad

Naughty Emma!  First she faked a mugging then she stole Chas’ passport to stop her going to France with James.  This week Chas realises it’s missing and has to let James down, but Finn is beginning to get suspicious about his mum after finding a photo.  He decides to confront his mum (with his brother, Ross) and ask her about the missing passport and insisting that she comes clean to James or he will.

Emma is clearly panicked until she overhears an interesting conversation between Debbie and Ross and decides to use it as leverage.  Something that Debbie finds out later, when she tells Emma not to come to her and Pete’s engagement party only for Emma to reveal her hand about what she heard and tell Debbie that she will be attending her party.  Debbie speaks to Ross and is annoyed to hear she’s blackmailing him too.

At the party things take a turn for the sinister when the man that Ross robbed recently with Debbie, turns up with two thugs demanding his money back.   Ever gallant, Ross gets in the car with him, wanting to protect Debbie and the whole business is witnessed by Cain who wants to know what is going on.

When Debbie learns that Ross didn’t come home that night she gets an uneasy feeling and decides she should tell Pete exactly what’s been going on, but will she go through with it?

Doug is disturbed by Laurel’s lack of interest in facing her drink problem.

Dan tells Kerry he’s signed up for a business course.

Lisa and Jai are sick of Rachel’s attitude, but Sam is worried about her as she has a nightmare.